On February 13, 1941, Gov. Eugene Talmadge signed legislation that proposed a Constitutional Amendment changing the 2-year terms for Governor and other statewide Constitutional Officers to 4-year.

Without question, the biggest news yesterday was that The Breakfast Club will play on the large screen again for its 30th anniversary on March 26 and March 31, 2015. 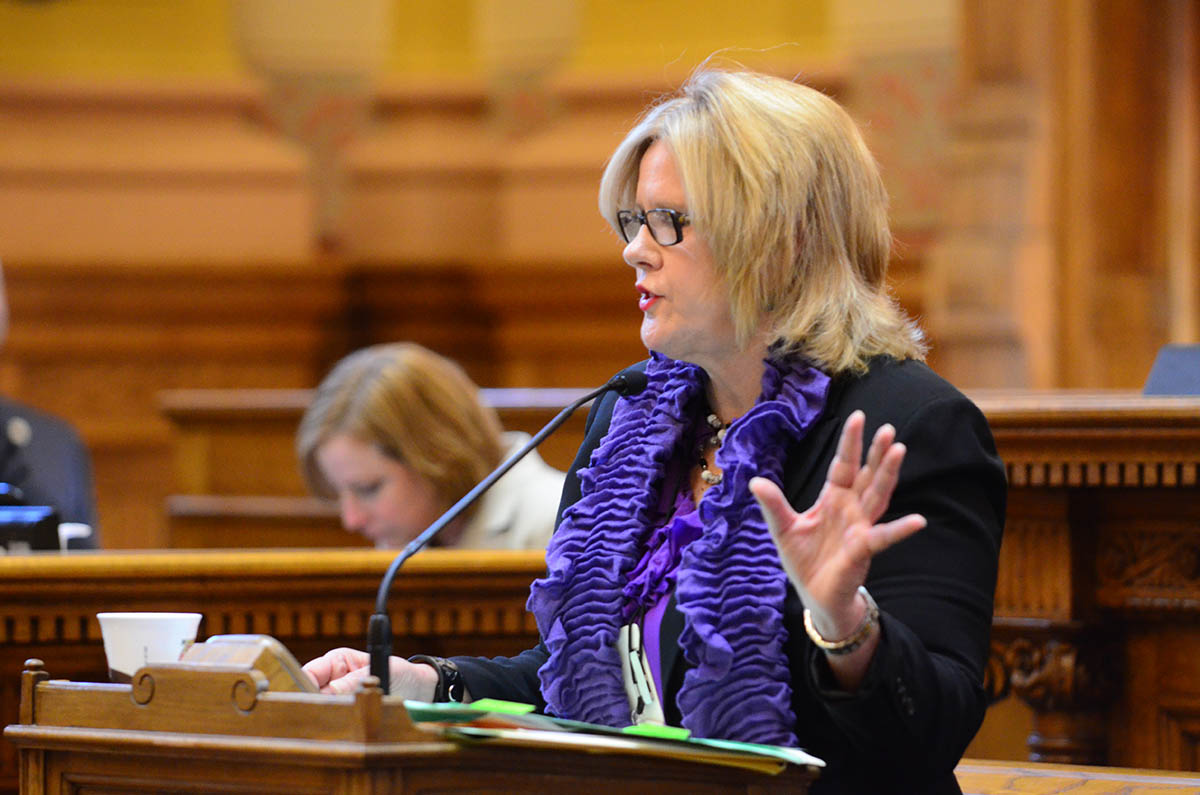 Yesterday, the Georgia Senate passed Sen. Renee Unterman’s Senate Resolution 7 by a 53-3 margin and Senate Bill 8 by a 52-3 vote. The difference in the Yea votes was because Senator David Shafer presided over the second vote, and the presiding officer traditionally does not vote. 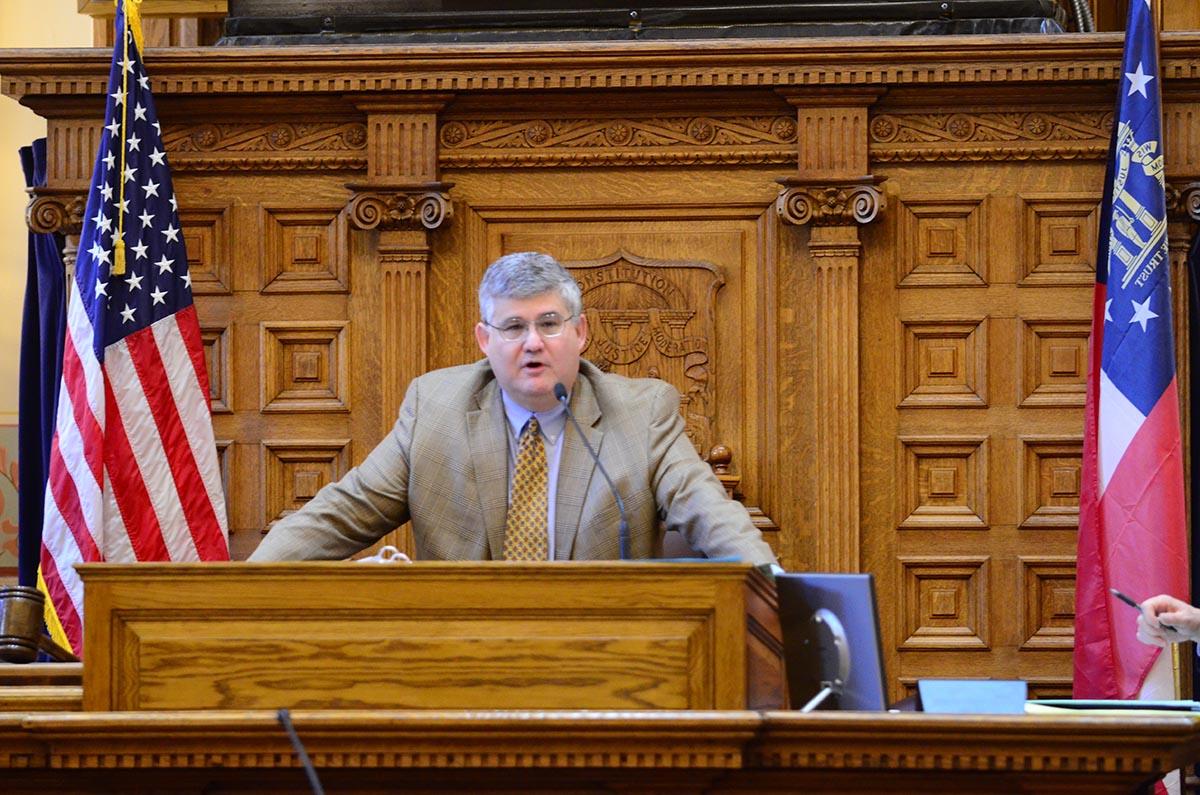 A blog post by Senator Unterman about the bills mirrors the opening of her floor speech introducing the first of the bills.

“We can no longer ignore the sex trafficking that is happening in our own backyard and that threatens the lives of children every day. While no legislation can fully eradicate the criminal networks profiting from the exploitation of children, we must continue the fight to protect our most precious citizens. With the approval of this bill and resolution, the Georgia Senate is sending a clear message to sex trafficking victims that we are doing everything we can to provide the assistance needed to rebuild their lives,”

Voters would also have a say on whether adult entertainment establishments should give one percent of their profits annually to the fund [under Senate Resolution 7].

“This is justice for people who don’t have a voice, who can’t give money to our campaigns, who can’t go to the polls and vote,” says Unterman. “These are people who deserve justice and deserve a better life.”

The measures now head to the House, where Rep. Chuck Efstration, R-Dacula, is sponsoring a similar bill. He’s optimistic about the legislation’s chances.

“I’m very confident that legislators are interested in doing what needs to be done to address this critical problem,” says Efstration.

A number of Republican representatives tell WABE they will probably support the measure. But a few say they’re concerned about the portion of the bill that would ask the adult clubs to pay a portion of their profits to the fund, because they dislike placing additional taxes on any business. The bill needs 120 votes to pass in the House, so sponsors will likely need the support from both parties.

Bill Hendrick of the Associated Press has more,

Sen. Mike Crane said At­lanta is “recognized throughout the nation as the place where a child is most likely to be exploited.”

“People have asked if this is the proper role of government. Should we be raising taxes or fees on businesses?” Crane asked.

“There is a great cost to our society in what they do. We are the No. 1 place in the world to do business, but we are not No. 1 to do this kind of business. Georgia will not stand for the abuse of our children.”

A story this morning on WABE quoted a lawyer for strip clubs saying they would fight the imposition of a $5000 fee. I’ll bring you a link to that on Monday.

The Georgia House of Representatives passed House Bill 91 by State Rep. Brooks Coleman (R-Duluth), which will grant high schools diplomas to a number of students who completed the course requirements for graduation but failed one of a series of test that was required for graduation, but which are no longer required.

Students have not taken the tests since the 2013 school year.

Former students who did not pass the graduation test can request a waiver from the State Board of Education. But officials say the board can only hear 300 cases a year.

The bill would shift that responsibility to local school boards. Supporters say that would give about 8,000 people an easier path to their diploma.

Sponsor Rep. Brooks Coleman of Duluth says the state should not punish people who otherwise did well for an eliminated test.

A Sunday Sales bill for Savannah for St. Patrick’s Day is expected to pass both houses.

Legislation was introduced Wednesday by freshman Rep. Jesse Petrea, R-Savannah, that would allow local bars to operate on Sunday before St. Patrick’s Day.

Georgia Rep. Ron Stephens, R-Savannah, said he does not believe the bill, which he is also sponsoring, will have any difficulty being adopted in time for the holiday.

The Savannah City Council had requested the legislation last week after deciding to have a four-day festival from Saturday through Sunday. That meant outdoor vendors would be able to sell alcohol on Sunday in the festival zone along with restaurant and retail stores throughout the city.

The mayor and aldermen were concerned about bars being unable to benefit from the influx of visitors as well, because of state law prohibiting drinking establishments from operating on Sunday.

Business in middle Georgia improved in 2014 and is expected to continue growing this year, according to speakers at an Economic Outlook Luncheon. Here’s the money quote:

“When it comes to obstacles that businesses faced in 2014, government regulation and red tape leads by leaps and bounds,” Tomic said. “It is most often ranked as the No. 1 obstacle, and it is the most ranked of all the obstacles.”

Benjamin Ayers of the Terry College of Business at UGA said at the same conference,

“The turnaround in real estate and more favorable demographic trends will help Georgia’s financial institutions,” Ayers said. “However, the costs associated with regulatory compliance as well as less mortgage refinancing … will limit job growth in the financial activities sector.

One of the top reasons for optimism about Georgia’s economic growth is due to a “renaissance in manufacturing activity,” he said. This is notable because the state lost four out of every 10 manufacturing jobs it had in the past decade.

“However, in the last three years, we saw many manufacturing projects announced in the aircraft, automobile, construction equipment, life sciences and flooring industries,” he said.

He agreed with Tomic that the state needs to develop a “much better educated and more highly skilled workforce,” especially when recruiting life sciences companies.

Maria Andrews has taken over as the new director of the Charlie Norwood Veterans Affairs Medical Center in Augusta.

Savannah, Coastal Georgia and the ocean off the coast are the site for a massive military exercise.

In its second year, Sentry Savannah, run by the Georgia Air National Guard’s Air Dominance Center, has grown. About 1,400 troops from active duty, National Guard and reserve units are participating in the event sponsored by the federal National Guard Bureau.

Throughout Sentry Savannah teams with as many as 40 fighter jets have squared off in prolonged dogfights, said Rachel, who planned the exercise. Pilots also have the opportunity to drop inert bombs and fire other munitions just south of Savannah at the Marine Corps-owned Townsend Bombing Range in McIntosh County.

The recent $15 million upgrade to its ramp has ensured the facility can host fifth generation fighter jets — the F-22 Raptor and F-35 Lighting. This week it’s hosting F-22s from Florida’s Tyndall Air Force Base and an F-35 from nearby Marine Corps Air Station Beaufort. F-15s, F-16s and F/A-18s are also participating in the training.

Walter Jones of Morris News writes about the state of solar electricity generation in Georgia.

The report [by the National Solar Foundation] ranks the state as having the 14th largest solar-power workforce with 2,900 employees split between manufacturing, installation of solar panels and administration and sales. That represents a 13 percent increase over the past year.

Most of that growth is attributed to Georgia Power Co.’s reaction to prodding from the Public Service Commission to buy more solar power. The utility launched a program to contract with independent companies which led to construction of solar farms across the state.

Industry advocates forecast a new surge in hiring after passage of legislation to open popular financing options to homeowners and small businesses who want to lease their rooftops in exchange for free electricity. That bill passed the House unanimously this week.

“Third-party financing is a huge driver of solar growth across the country,” said Andrea Luecke, executive director of the Solar Foundation.

Delays in building the two new nuclear reactors at Plant Vogtle may delay bringing the units online and construction may cost significantly more money, though it’s not yet certain who will bear the additional costs.

The utility disclosed to shareholders recently that the contractors need an additional 18 months to complete their work on top of the delays already reported. Georgia Power says its contract requires the builders to pay penalties for missing the deadline, but owner-related costs of added financing and alternative electricity-generation will mount at
$40 million per month.

At that pace, the project will be three years behind schedule and, by some estimates, as much as $4 billion over budget.

“Overall, we are not satisfied with the revised forecast and our responsibility is to minimize the impact to customers,” said Jacob Hawkins, a Georgia Power spokesman. “We are committed to holding the contractor accountable for all appropriate costs related to the delay, and we continue to expect them to employ all possible means to meet schedule targets, while maintaining a focus on safety.”

According to bidding information provided by Hannah Solar, the panels could cost anywhere from $2 to $2.95 per watt to purchase and install, depending on the wattage generated by participants.

Although it began as an island initiative, Solarize Tybee has since been extended to all residents, businesses and governmental entities of Chatham County. Solarize Tybee will be the first program of its kind in Georgia.

Councilman Paul Wolff said enrollment for the program may begin as early as today and will continue through mid-April.

The Democratic National Committee announced it will hold its 2016 Convention at the Wells Fargo Center in Philadelphia, Pennsylvania the week of July 25, 2016.

With Republicans holding their national convention in Cleveland the preceding week, both parties will make their made-for-TV pitches in neighboring states familiar with hard-nose presidential politics.

Democrats have carried Pennsylvania in every presidential election since 1992 but the GOP often covets the state.

Ohio remains one of the most contested states in recent presidential elections and is a linchpin for Democrats. The last Democrat to win the White House without carrying Ohio was John F. Kennedy in 1960, and no Republican ever has.