Rep. Lynn Westmoreland: On US Embassy Evacuation in Yemen

Rep. Lynn Westmoreland: On US Embassy Evacuation in Yemen 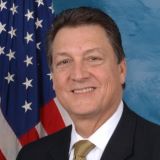 Westmoreland on US Embassy Evacuation in Yemen

On Wednesday, the United States Embassy in Sanaa, Yemen was evacuated due to escalating Houthis violence in the region that was deemed unsafe for embassy personnel.  Below is Congressman Westmoreland’s statement.

“The evacuation of the U..S Embassy in Yemen shows that the Iranian-backed Houthis regime is aggressively and dangerously spreading throughout the Middle East,” stated Westmoreland. “The Houthis coup is a direct threat to the counterterrorism efforts of the US and potentially to our national security. Just this past September, President Obama was touting Yemen as one of his foreign policy success stories – showing the need for President Obama to get a tighter grasp on his foreign policy plans as the unrest in the Middle East evolves. We must remain vigilant in our efforts to defeat terrorism in the Arabian Peninsula, and in addition, remain focused on eliminating ISIS.”

Congressman Westmoreland is on the House Permanent Select Committee on Intelligence, where he serves as Chairman of the NSA and Cybersecurity Subcommittee.