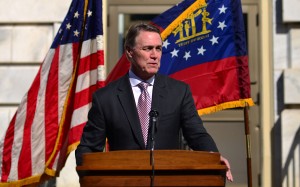 U.S. Senator David Perdue today announced that he will oppose the nomination of Loretta Lynch for Attorney General:

“While Ms. Lynch may have an impressive resume, she did not adequately answer the committee’s questions nor alleviate my concerns about the consistency with which she applies our nation’s laws. After thoroughly reviewing her record and testimony, I am not confident she will defend the Constitution, especially when the President seeks to abuse his power.

“We need an Attorney General who will maintain independence and will put the law above partisan politics. I strongly disagree with her support for the President’s executive action on amnesty, which is both unlawful and unconstitutional.

Ultimately, Ms. Lynch’s actions and answers did not demonstrate that she will consistently enforce the law and uphold our Constitution.”