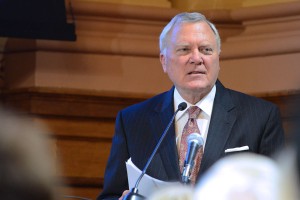 “While Georgia boasts many schools that achieve academic excellence every year, we still have too many schools where students have little hope of attaining the skills they need to succeed in the workforce or in higher education,” said Deal. “We have a moral duty to do everything we can to help these children. Failing schools keep the cycle of poverty spinning from one generation to the next. Education provides the only chance for breaking that cycle. When we talk about helping failing schools, we’re talking about rescuing children. I stand firm on the principle that every child can learn, and I stand equally firm in the belief that the status quo isn’t working.”

In the governor’s proposal, persistently failing schools are defined as those scoring below 60 on the Georgia Department of Education’s accountability measure, the College and Career Performance Index (CCRPI), for three consecutive years.

The Opportunity School District would take in no more than 20 schools per year, meaning it would govern no more than 100 at any given time. Schools would stay in the district for no less than five years but no more than 10 years.

“I would like nothing more than for the need for the Opportunity School District to decline every year; that would show our reforms are working,” Deal said. “But everyone – regardless of where they stand on this issue – can agree that today there is a need. We know from other states such as Louisiana and Tennessee that these programs can produce positive results for students and communities.

“Educational opportunity opens the door to the American dream. We can’t guarantee that every child will achieve, but we must do everything in our power to make sure they at least get the chance.”

Creating the Opportunity School District requires a constitutional amendment. Deal this session will work with legislators to put the amendment on the 2016 ballot and to pass enabling legislation that will govern how the district operates.