Five Reasons GaPunditPro.com is better than the state websites: 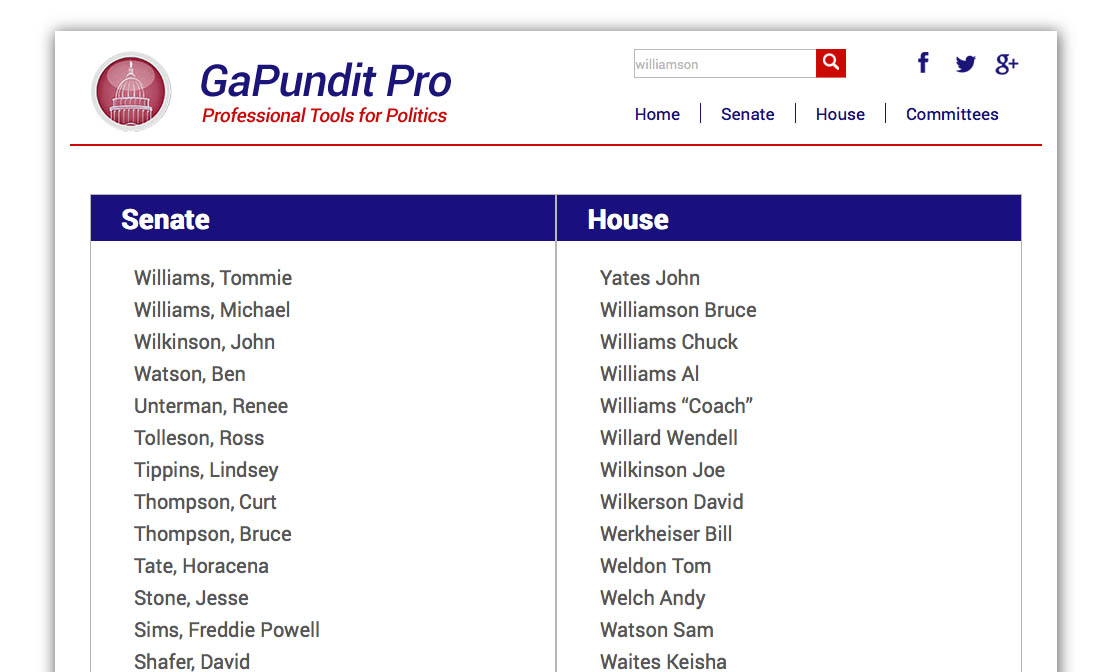 3. Mobile-friendly – try our site on your cell phone, then try the official site

4. Call or email directly from the app when viewing on mobile

5. We already have listings for new State Reps elected this week

The House of Assembly, Georgia’s legislative body, held its second meeting after statehood on February 6, 1788 in Savannah.

On February 6, 1952, Governor Herman Talmadge signed resolutions of the General Assembly that included:

A resolution calling on Congress to call a convention to propose a constitutional amendment to repeal the Sixteenth Amendment and instead allow a maximum rate of 25 percent on any federal income, transfer, gift, or inheritance tax.

A resolution urging U.S. Senator Richard B. Russell to run for the presidency.

On February 6, 1956, Governor Marvin Griffin addressed a joint session of  the Georgia General Assembly, asking their support for House Resolution 1185, which introduced the idea of “interposition,” in which the State of Georgia would declare the U.S. Supreme Court’s 1954 and 1955 Brown v. Board of Education decisions “null and void” in Georgia. That day Griffin also signed a raft of legislation for his “massive resistance” agenda against integration of state schools.

Ronald Wilson Reagan was born on February 6, 1911 in Tampico, Illinois. In 1980, Reagan would be elected President of the United States, beating incumbent Jimmy Carter. When he was born, his father said, “he looks like a fat little Dutchman.  But who knows, he might grow up to be president some day.”

On February 6, 1985, Reagan gave the State of the Union. During the speech he announced what would be known as the “Reagan Doctrine.”

Reagan began his foreign policy comments with the dramatic pronouncement that, “Freedom is not the sole prerogative of a chosen few; it is the universal right of all God’s children.” America’s “mission” was to “nourish and defend freedom and democracy.” More specifically, Reagan declared that, “We must stand by our democratic allies. And we must not break faith with those who are risking their lives—on every continent, from Afghanistan to Nicaragua—to defy Soviet-supported aggression and secure rights which have been ours from birth.” He concluded, “Support for freedom fighters is self-defense.”

With these words, the Reagan administration laid the foundation for its program of military assistance to “freedom fighters.”

This week, Senate Republicans continued the pursuit of our legislative agenda by passing Senate Bill 2, the Lieutenant Governor’s initiative that encourages education and job readiness by removing obstacles to attaining a high school diploma, the first prerequisite to finding a good job.

The measure pertains to students who are at least 16 years old, have finished the 10th grade, and have completed two English courses, two math courses, two science courses, two social studies courses, and health and physical fitness requirements – typical core courses for the first two years of high school. If these high school students can pass college entrance examinations, they can begin taking courses towards an associate’s degree or technical diploma/certificate. Once they achieve their degree or certificate, their high school requirements will have been fulfilled. In effect, they will have graduated both college and high school on the same day.This bill is a true win-win. High school students who are ready for college can get a jump start on their education. High school students who are not suited for traditional college can pursue a skilled trade or technical program and gain the training and education that will help them thrive in the workplace. In turn, Georgia gains a skilled workforce of graduates who can fill positions as welders, machinists, medical technicians, wildlife managers, and many more important functions needed in our economy.

The Georgia State Senate voted unanimously to give students this tool to help them follow the educational path of their choosing at an accelerated pace to help them to prosper in today’s world. I applaud Lt. Gov. Casey Cagle, who spearheaded this bill, for his strong leadership that reflects his vision of providing Georgia’s children varied educational opportunities and provides our state’s economy a skilled workforce. The bill is now headed to the House of Representatives for consideration.

Senator Bruce Thompson places the unanimous vote on SB2 in the context of a larger Senate concern with children.

SB 1 is a top priority for the Senate Majority Caucus this legislative session because autism is affecting more and more Georgians. The most recent estimates say as many as 1 in 64 children are diagnosed on the autism spectrum. The treatment these children need is expensive for their families, crucial to the development and important for the health of our society.

Another important measure to the caucus and to me is Senate Bill 2 sponsored by Senator Lindsey Tippins and inspired by Lieutenant Governor Casey Cagle’s work with college and career academies.

I am proud of my colleagues and the leadership of the Senate for putting forth two good bills that help the children of our state.

The AJC Political Insider writes of Gov. Deal’s talk to the Faith and Freedom Coalition yesterday:

“With regard to our child welfare reform commission, we have begun to implement their recommendations. We have substantially increased the number of caseworkers and supervisors in our Department of Family and Children Services. We all have to be vigilant in that regard.”

“I know, more and more, when we have bad cases happen, we start asking questions of, ‘Why did that happen?’ And too often, people want to point the finger at state government, and say it was because DFACS didn’t do this, or DFACS didn’t do that.”

When was the last time the press or anybody else asked the greater family, ‘Why didn’t you do something about this?’ It really galls me, quite frankly, to see an able-bodied grandparent complaining about the fact that DFACS didn’t do something to protect her grandchildren. And my question is, well, where were you?”

The Georgia Department of Revenue is seeing an increase in the number of fraudulent income tax returns, according to the Associated Press.

Department officials said in a statement Thursday that they believe the personal information being used to file the fraudulent returns was gained through third-party security breaches.

Officials say the Department of Revenue has flagged a significant number of returns as potentially fraudulent and the department will reach out to taxpayers who have had dubious returns filed in their names.

The mayor and aldermen directed staff to request the legislation after staff recommended on Thursday morning having a four-day festival, rather than a two-day festival as originally planned.

While supportive of the recommendation, council members said the change left bars in an unfair position.

By extending the festival to include Saturday and Sunday, outdoor alcohol sales would be allowed in the festival zone through the weekend, as well as Monday and Tuesday. Restaurants and retail stores could also sell alcohol Sunday, but bars would be prohibited from operating that day by state law.

“That’s unfortunate,” said Alderman Tony Thomas. “They are being crippled by the state, not the city.”

State Rep. Jay Roberts told a House committee that he’s looking for constructive input on the Transportation Bill, not just a chorus of “No” and “Heck No”.

House Transportation Chairman Jay Roberts, sponsor of House Bill 170, said he’s already heard plenty from local officials upset about the measure’s phase out of sales taxes on gasoline purchases used by cities, counties and school systems. And he’s aware of tea-party leaders who reject the plan as a tax increase — even if the phase out lessens the impact on motorists’ billfolds.

But he said those complainers weren’t at the eight field hearings he led over the summer and fall around the state that asked for public suggestions.

“We are still continuing to listen to each and everybody, every person that has issues,” said Roberts, R-Ocilla. “But we’re looking for constructive conversation, not obstructive conversation. If you are a ‘no’ and that’s you’re philosophy and ‘we’re against everything that you’re doing here,’ then in all honesty — no disrespect — but I’m not going to waste my time.”

Members of the Georgia State Senate have formed a City of Atlanta Caucus, but one member was unexpectedly included – Senator Fran Millar (R-Dunwoody) has a district that includes not only parts of DeKalb, Fulton, and Gwinnett, but one portion of someone’s backyard that is within the Atlanta city limits.

Seven state Senators, concerned about the lack of representation of in-town constituency needs, have formed the Atlanta Senate Delegation.

“Ensuring the interests of in-town Atlanta citizens are well represented is critical. The creation of the Atlanta Delegation will allow those of us who represent districts within the City of Atlanta to focus on and address the specialized of our urban citizens,” said Sen. Orrock.  “Atlanta is the economic engine of the state and we’ll be engaged in upholding the best interests of Atlanta under the Gold Dome.” 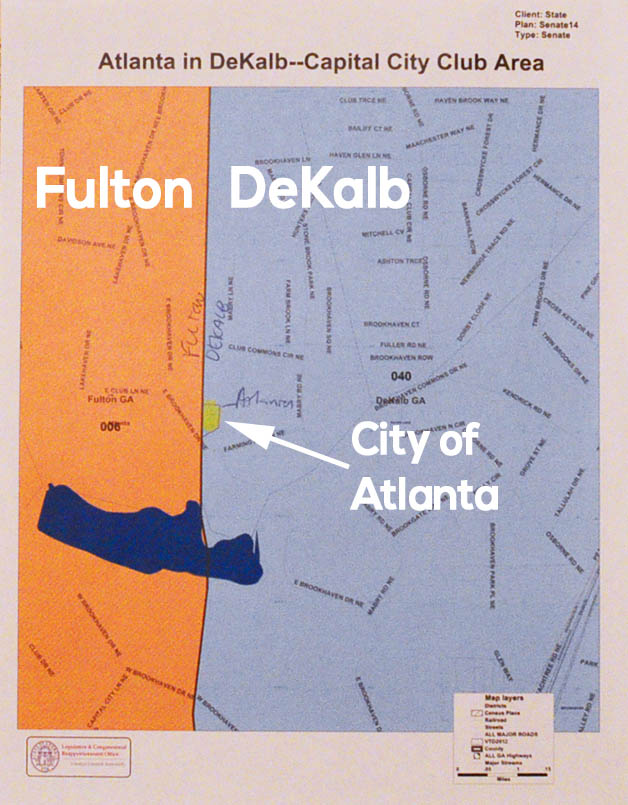 No love for teachers in DeKalb?

Last week in a meeting of the DeKalb County Board of Education, Stan Jester moved to use part of an administration request for an additional $9 million to give teachers a raise instead of spending the money on non-classroom expenses.

He was personally attacked by Board Member Joyce Morley who mocked his name. The Board voted against even discussing the proposal. I don’t know enough about the DeKalb Schools Budget to know whether Jester’s proposal would have helped, but I do know that preventing even discussion of the issue is not a healthy way to run our school system.

DeKalb County has been ordered to return $2.1 million to the federal government because they cannot show they spent it correctly.

The Georgia Department of Education characterized the repayment as a “corrective action” for failure to meet the federal “comparability requirement” under the Title 1 program, which supplements the budgets of schools with higher proportions of students from low-income households. To be in compliance, school districts must use state and local funds to provide “substantially comparable” services to all schools. DeKalb could not show that it did.

Georgia DOE ordered the repayment in a Nov. 14 letter to DeKalb Superintendent Michael Thurmond. On Monday, his staff informed the county school board that he wanted to set aside nearly $1.2 million for the repayment.

Her sentencing was first set for December, then later for earlier this month. The delay could stem from the time federal prosecutors need to establish if Boyer has provided “substantial assistance” in exchange for their recommendation of a lighter sentence, a condition of her plea agreement.

I assume that providing “substantial assistance” in exchange for a lighter sentencing recommendation means talking to prosecutors about allegations against other elected officials or public employees.

Tomorrow morning, I’ll be leaving the house early enough to get breakfast at Chick-fil-A before arriving at least 30 minutes early to my County Mass Meetings. Thirty minutes early because the 10 AM start time is a hard start and they close the doors at that time – if you’re late, you’re out of luck. 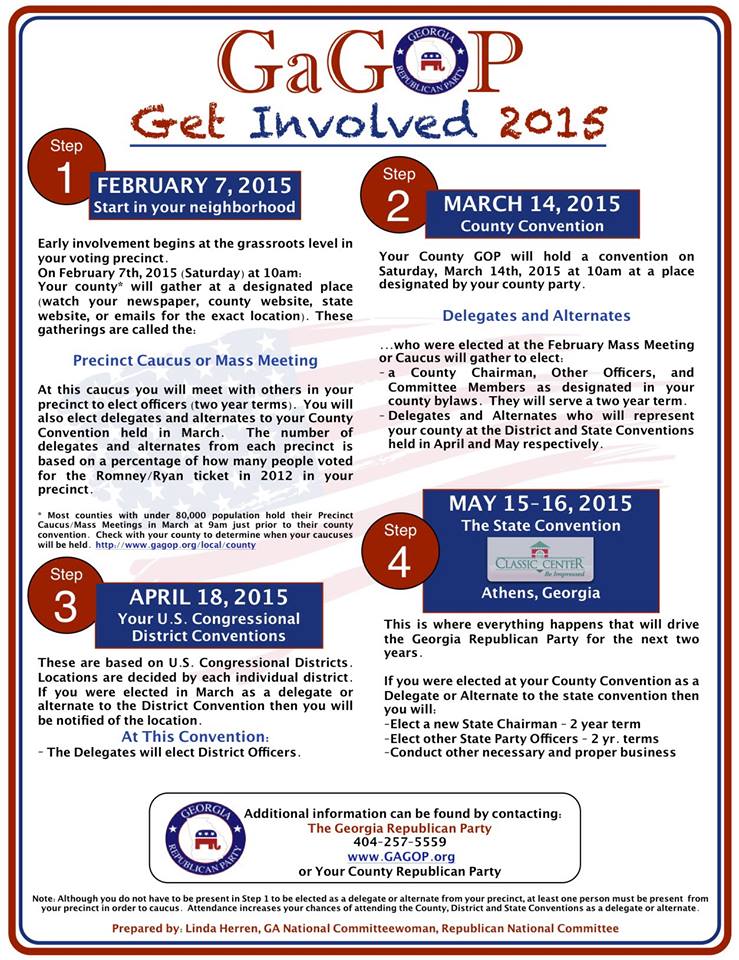