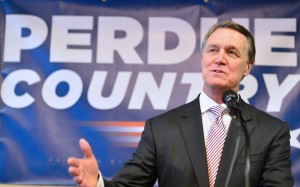 U.S. Senator David Perdue (R-GA) today, along with Senator Johnny Isakson (R-GA) and 52 other Senators, cosponsored a Balanced Budget Amendment (BBA) to the Constitution. The Balanced Budget Amendment would require total expenditures for any fiscal year to not exceed total receipts for that fiscal year. Senator Perdue continues to advance Georgians’ top priorities and has already cosponsored legislation in support of building the Keystone Pipeline, rolling back regulations, fully repealing Obamacare, advancing the Fair Tax, and implementing term limits.

“Georgians sent me to the Senate to help end the dysfunction in Washington and to get our economy back on track. In turn, I promised Georgians that I would immediately cut this outrageous spending, start solving our debt crisis, and finally balance the budget. That’s why I am proud to cosponsor a Balanced Budget Amendment to Constitutionally require the federal government to get its fiscal house in order.

“The United States is in a full-blown fiscal crisis, and we are handing our kids and grandkids $18 trillion of debt, as well as tens of trillions of dollars in unfunded liabilities down the road. Yet year after year, Washington is perfectly comfortable with giant budget deficits. For the sake of our economic and national security, and the future of our country, this has to stop.

“As a member of the Senate Budget Committee, I will continue to advocate commonsense ideas like the Balanced Budget Amendment that will help grow our economy. Every Georgia family understands you can’t spend more money than you take in without going bankrupt. Washington should not be able to continue to pile deficits on top of our already enormous debt without being held accountable.”