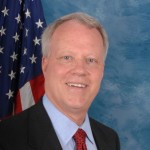 I voted NO against the $1.1 trillion CRomnibus tonight because the bill does nothing to stop President Obama’s unilateral executive amnesty, and continues to spend money we do not have. Congress should be using their Constitutional power of the purse to block the President’s immigration plans through the appropriations process – not bowing down to Harry Reid after a sweeping Republican win at the ballot box. I urge my colleagues in the Senate to reject this misguided bill – and to use their Constitutional authority to stop the President’s attempts to grant legal status to those who have broken the laws and come to this country illegally.