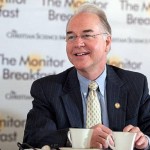 Congressman Tom Price, M.D. (GA-06) issued the following statement in support of 17 states, including Georgia, which have filed a lawsuit against the Obama Administration’s executive amnesty:

“The 17 states, including Georgia, which are helping spearhead the challenge to President Obama’s executive amnesty ought to be commended for their leadership. In the wake of the president’s unlawful disregard and disrespect for the Constitution, elected officials at both the federal and state level must pursue realistic avenues to hold the Obama Administration accountable.

We have an obligation to protect and defend the rule of law enshrined in our Constitution and with it the voices of the American people we represent. By stepping forward, these states are providing crucial leadership and support at this critical time.”