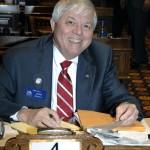 NOTES FROM THE SENATE

GEORGIA’S “RAINY DAY FUND”
The Revenue Shortfall Reserve (RSR), or the “rainy day fund” serves important purposes in the state government.  It is a contributing factor in Georgia being able to maintain its perfect triple AAA bond rating, and it also has helped the state ride out declines in revenues from time to time.  Of course, the reserve was wiped out during the recent recession. .  As the economy has continued to improve, the State has begun to restore the RSR to its previous levels.  A State’s RSR goes a long way towards showing how good a steward a state is over its own money.  This week we will take a look at Georgia’s experience with its rainy day fund, as well other states’ struggles and successes with their versions of the RSR.
RSR HISTORY
The Georgia General Assembly passed legislation in 1976 creating the RSR, and establishing that it should be maintained at a level of at least 4% of the net revenue of the preceding fiscal year.  According to O.C.G.A. 45-12-93, the amount of all surplus state funds existing at the end of each fiscal year are reserved and added to the RSR.  The Governor may appropriate RSR funds up to 1% of net revenue collections of the preceding year for funding K-12 enrollment gains.  The Governor may also release a stated amount of RSR funds to be appropriated by the General Assembly, and RSR funds may also be used to cover contractually obligated deficits if the state’s obligations exceed net revenues.  Under recent changes to state law, the RSR’s limit was raised to   would be enough to fund the state government for about 15 days.
USE OF THE RSR
The RSR in Georgia has ranged over time from 1% as a total of net revenue in various years to a high of 8.58% in 2007.  In 2007, the RSR stood at an all-time high of almost $1.8 billion, but by 2010, as the recession raged on, the reserve fell to $268 million eventually to $50 million.  From 2007 to 2010 the state’s RSR decreased by almost 85%.  Georgia’s RSR has helped the state in multiple economic downturns, the most recent being the recession of 2008-2013.  The RSR was also utilized during a time of declining revenues in the early 1990s and the early 2000s.  However, after each downturn the state has been vigilant in building back its reserve.  The importance of this was borne out in the economic downturn.  If the state had not built up the RSR after the early 2000’s, its financial standing would have been even worse than it was.  From 2007 to 2008, the state used more of its RSR than it had in total in 2004. That alone shows how important it is for the state to maintain a viable rainy day fund.  Some other states were not as prepared as Georgia when revenues plummeted.  The PEW Research Center estimates that nationally, states had $59.9 billion in reserves in 2008, but the aggregate national budget shortfall was $117.3 billion in 2009.  Due in part to Georgia’s RSR, the state was able to help cover budget gaps without resorting to raising taxes, like other states.
OTHER STATES’ RESERVES
As of July 2014, 46 out of the 50 states have some sort of budget stabilization fund, and 20 other state’s funds are based on surpluses.  Other states use methods that range from an appropriation to funds linked to revenue growth; but the most popular model is the surplus-based fund used by Georgia. Some of the reasons other states use different types of funds can be chalked up to different economic realities.  Some states face more volatile revenue streams than Georgia, and so therefore try and find ways to model their version of the RSR to best fit their state’s revenue sources.  Georgia does not tie its RSR to revenue volatility.  PEW ranked Georgia as having the 21st most volatile revenue stream coming in at 6%, which compared to some other states such as Alaska which experiences revenue volatility over 34%, is somewhat predictable.