On November 21, 1620 (November 11 under the calendar used then), the first governing document of the English colony at Plymouth, Massachusetts, the Mayflower Compact, was signed by most of the male passengers of the Mayflower.

Having undertaken, for the Glory of God, and advancements of the Christian faith and honor of our King and Country, a voyage to plant the first colony in the Northern parts of Virginia, do by these presents, solemnly and mutually, in the presence of God, and one another, covenant and combine ourselves together into a civil body politic; for our better ordering, and preservation and furtherance of the ends aforesaid; and by virtue hereof to enact, constitute, and frame, such just and equal laws, ordinances, acts, constitutions, and offices, from time to time, as shall be thought most meet and convenient for the general good of the colony; unto which we promise all due submission and obedience.

The Georgia Trustees outlawed rum in the colony on November 21, 1733 after James Oglethorpe wrote them that it was responsible for sickness and death in Georgia. Two-hundred eighty-one years later, Richland Rum is being distilled with Georgia-grown sugar cane in Richland, Georgia.

North Carolina ratified the Constitution on November 21, 1789, becoming the twelfth state to do so.

Here are two TV ads from the 1970 campaign by Carl Sanders for Governor.

Yesterday, we taped Georgia Public Broadcasting’s Political Rewind early and it began with special guests former Governor Roy Barnes (D) and former Congressman Buddy Darden (D) discussing their experiences in Georgia politics with Carl Sanders. It was fun to hear first-hand stories of a time in Georgia politics that I’d only read about. The show will air today at 3 PM on WRAS 88.5 FM in Atlanta and statewide on the GPB radio network. If you enjoy Georgia history, you’ll enjoy the show. 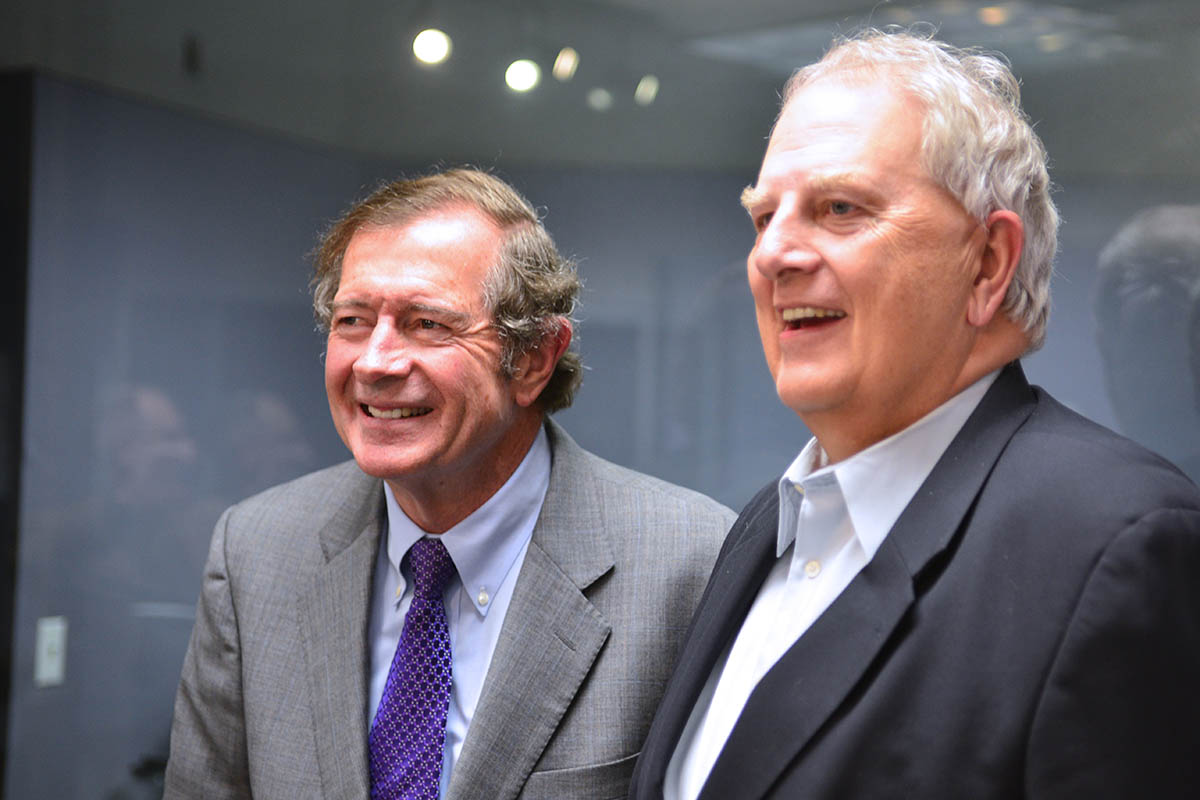 In the context of a movement to legalize the medicinal use of an oil derived from cannabis in Georgia, this clip of Jimmy Carter from 1977 is interesting.

The first legislation of the 2015 Session of the Georgia General Assembly, House Bill 6, has been introduced by State Rep. Dar’shun Kendrick, to allow grades higher than 4.0 for AP, International Baccalaureate or dual credit courses. It would take a real overachiever to come up with something like that.

The Judicial Nominating Commission is accepting nominations for three vacancies on state courts:

Nominations for all three of the vacancies are due on or before December 29, 2014.

In Washington, Congressman Tom Graves (R-Upper Left-hand Corner) will serve as Chairman of the House Appropriations Subcommittee on the Legislative Branch.

“I joined this committee because of the unique opportunity to fight for taxpayers and reform the federal government,” said Rep. Graves. “I want the Appropriations Committee to be known as a place where taxpayer dollars are saved, not spent. As the Legislative Branch Subcommittee chairman, I’ll have a prime opportunity to walk the conservative talk. It’s an honor to have Chairman Rogers and the House Majority entrust me with this major responsibility.”

Yesterday’s big news mainly revolved around President Obama’s immigration speech. Here are reactions from some of Georgia’s members of Congress.

“President Obama continues to circumvent Congress by executive order. This is the wrong way to govern. Bottom line, any attempt to circumvent Congress and grant legal status to millions is unacceptable. We must stop the President from executing bad policy and will consider all legislative and legal options when determining the best course of action to do so.”

“President Obama’s proposed executive action on amnesty is an outrageous abuse of power. Georgians sent a clear message in the most recent election: they want Washington to work again. They don’t want the President playing politics and sidestepping Congress on important issues like immigration. They want security first and enforcement of current laws. They don’t want amnesty and open borders.

“Let’s not forget, the President purposely delayed this unilateral action until after Election Day for political purposes. As part of the new Senate majority, I will fight to hold the Obama Administration accountable when they overstep their authority and work through Congress to fix our broken immigration system with step-by-step reforms, not sweeping actions that don’t solve the underlying problem.”

“President Obama’s actions are not only unlawful, they are emblematic of this administration’s increasingly brazen disregard and disrespect for the American people – not to mention every immigrant who has come to this country legally. The president has wandered so far outside his constitutional authority that he’s doing incredible harm to the integrity of this country’s rule of law. At the same time, he is saying that he cannot be trusted to keep his own word. After all, President Obama himself, on multiple occasions, has told the American people that he does not have the authority to take the type of unilateral actions he’s now pursuing.”

“The Obama Administration’s reasoning and excuses are increasingly nonsensical. The president is not exercising his authority. He’s trampling on the Constitution that prescribes him his authority; he is to enforce the laws of this land, not invent them. Moreover, when the American people are asking Congress and the president to work together on solving the challenges facing our nation, the president is doing the exact opposite.”

“President Obama remains the greatest obstacle to immigration reform. His actions are doing more to setback the cause of reform than advance it. So long as the president and his administration see our broken immigration system as a political opportunity rather than a problem to solve, they will continue to stand squarely in the way of success.”

“President Obama’s unconstitutional plan to circumvent Congress and grant amnesty by unilateral executive order is unprecedented, and an insult to the American people who on Election Day rejected his policies and voted to change the way Washington functions. A majority of Americans oppose President Obama’s amnesty plan and want the White House to work together with the newly elected Congress to find solutions that secures our borders and reforms the process so that it actually works for those trying to do it the right way.”

“President Obama’s action defies voters, the law and even his own statements. My constituents are outraged by his brazenly political and lawless behavior. In response, the Republican Majority in Congress is exploring every tool we have to keep the constitutional checks and balances intact. Our system of government is stronger than one man’s ambition, and I know that Congress will steadily lead the country through the final chapter of the Obama presidency.”

“The President announced his ‘reform’ policies today, which will protect some 5 million illegal immigrants from deportation and allow them to remain here.  The Constitution does not grant the President the authority to make this change to the law unilaterally and he has readily admitted his lack of authority to do so many times before.

“Despite a resounding message from the American people on Nov. 4th, President Obama is forcing unwanted policies on all of us for which taxpayers will have to foot the bill. It is my hope that our court system will quickly strike down this overreach and allow Congress to decide the laws for our nation, as the Constitution intended.”

“Tonight, President Obama once again proved that he’s more concerned with advancing his own personal agenda than the will of the American people,” said Georgia Republican Party Chairman John Padgett.  “Americans deserve a robust debate on immigration reform, not a swift edict from a ultra partisan, power hungry president.”

“For the millions of fellow Americans of foreign descent just like us, becoming an American citizen was the capstone moment in their journey in search of freedom and opportunity,” said businessman and Republican activist Baoky Vu.  “I am sure that they, like me, are unsure what to make of President Obama’s executive action on immigration.  The spectrum of feelings range from being cheated to being ignored.”

“Representative democracy is the cornerstone of America’s freedom,” said Leo Smith, Georgia Republican Party Minority Engagement Director.  “Americans want solutions to this country’s immigration crisis made in Congress after robust debate and discourse, not by one person with the stroke of a pen.”

“I am disappointed with President Obama’s decision to bypass Congress on immigration in America through Executive Order,” said Alex Gimenez of the Georgia Young Republicans. “It’s up to the American people through Congress – not the Executive Branch acting alone – to decide how we reform the broken immigration system in place.”

The 2014 Harvest Celebration will be held on Friday, November 21st at the Cobb G…

Mark your calendars for the best holiday event of the year, and get ready…

Dedication of the Nativity Scene at the Capitol