Carl Vinson was born on November 18, 1883 in Baldwin County, Georgia. At noon on that day, U.S. and Canadian railroads implemented four time zones for the first time.

Efficient rail transportation demanded a more uniform time-keeping system. Rather than turning to the federal governments of the United States and Canada to create a North American system of time zones, the powerful railroad companies took it upon themselves to create a new time code system. The companies agreed to divide the continent into four time zones; the dividing lines adopted were very close to the ones we still use today.

Most Americans and Canadians quickly embraced their new time zones, since railroads were often their lifeblood and main link with the rest of the world. However, it was not until 1918 that Congress officially adopted the railroad time zones and put them under the supervision of the Interstate Commerce Commission.

On November 18, 1933, Franklin D. Roosevelt traveled from Washington, DC to Savannah, Georgia by train for Georgia’s Bicentennial and delivered a speech at Municipal Stadium.

Carl Vinson was honored on his 81st birthday in Milledgeville, Georgia on November 18, 1964; Vinson did not run for reelection in 1964 and retired after 50 years in office.

President Richard M. Nixon flew into Robins Air Force Base for Carl Vinson’s 90th birthday on November 18, 1973; on the trip he announced the next American nuclear supercarrier would be named USS Carl Vinson. 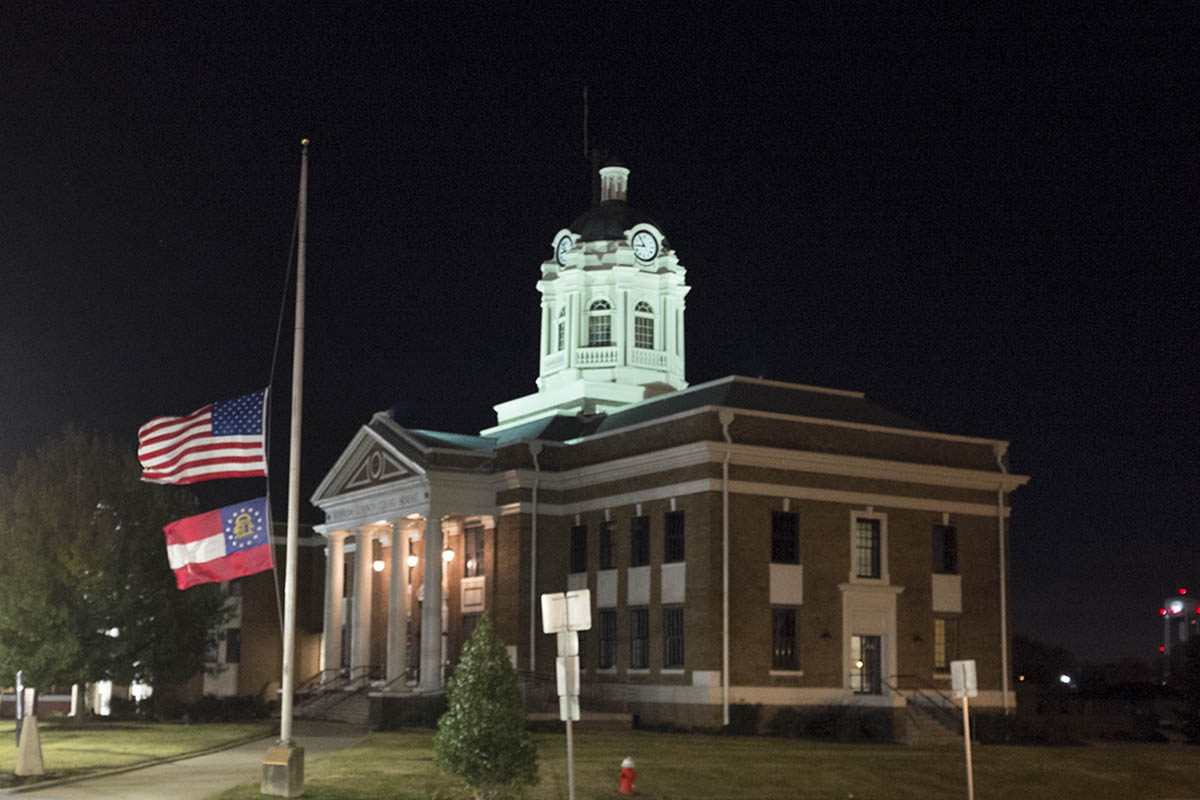 Flags will fly at half-staff on Georgia state buildings and facilities in honor of Governor Carl Sanders, who has died at age 89.

“Sandra and I are greatly saddened by the passing of Gov. Carl Sanders,” said Deal. “The bond we shared was more than the mutual possession of a public office; Gov. Sanders was a mentor and friend whose bright example of compassionate leadership was unsurpassed. During his tenure as governor, he transformed Georgia by building thousands of classrooms, improving our transportation system, increasing state income and bringing a competitive spirit to the state through the Atlanta Falcons and Atlanta Braves. But more than anything else, Gov. Sanders showed true leadership and character by supporting civil rights for all during a time when many were not. It is this legacy that I remember with a heavy heart today, and his lasting positive impact on our state will be felt by many future generations of Georgians. We will continue to pray for the Sanders family during this difficult time.”

A memorial service will be held at 11 a.m. on Saturday, Nov. 22 at Second Ponce de Leon Baptist Church, 2715 Peachtree Road, NE. The family has asked that donations in memory of Gov. Sanders be made to either the Metropolitan YMCA or the University of Georgia Law School.

Yesterday, the Republican Caucus nominated Senator David Shafer (R-Duluth) for reelection as President Pro Tem, the highest-ranking member of the State Senate; the position will be formally elected by the entire Senate.

“I am grateful to my fellow Republicans in the Senate for their vote of renewed confidence today. I look forward to working with Senate Majority Leader Bill Cowsert and our new Caucus leadership team in making Georgia the best place to work, worship and raise children,” said Shafer.

“I’m honored to be elected as the next Majority Whip of the Senate Republican Caucus. I remain committed to defending core constitutional principles such as limited government and fiscal responsibility, and will remember these ideals when advising the caucus on legislation that will create a more prosperous Georgia,” said Sen. Gooch.

“Sen. Gooch is a committed, hard-working public servant who will serve with great distinction as majority whip. I appreciate his dedication to his district as well as to the Senate. I look forward to working with him and the rest of our leadership team to advance our agenda in the General Assembly,” said Lt. Gov. Casey Cagle.

State Senator Josh McKoon (R-Columbus) pre-filed SB 6, the first Senate bill of the 2015 Session of the General Assembly, called the “”Georgia Road Safety and Driver’s License Integrity Act.” According to a press release,

The goal of Senate Bill 6 is to protect the integrity of our driver’s license and the safety of Georgia’s roadways.

Senator McKoon said, “Georgia should not become another California because of the refusal of the Obama administration to faithfully execute its constitutional obligation to enforce our laws.  I am certain that the majority of Georgia voters would take a dim view of the General Assembly deferring to the president’s judgment on illegal executive amnesty and rewarding illegal aliens with a Georgia driver’s license and other public benefits.”

“Previously, Georgia law restricted illegal aliens from getting a driver’s license,” said Sen.McKoon. “When the President created the ‘deferred action status’ class, he deliberately created a loophole to make millions of illegal aliens eligible for Georgia driver’s licenses and other public benefits. Senate Bill 6 will eliminate that loophole in Georgia.”

Sen. McKoon also stated that, “Our job here is to make Georgia as friendly as possible to business while protecting struggling American workers and their wages. This includes the legal immigrants who joined the American family within the lawful framework given to us by the U.S. Congress. Georgia has long been a conservative state that has refused to grant driver’s licenses to illegal aliens. We are confident that Georgians will rally behind continuing that common sense tradition, guided by the bedrock principle of preserving the rule of law.”

State Rep. Allen Peake (R-Macon) filed House Bill 1, called Haleigh’s Hope Act, the first House Bill of the 2015 Session, which is the framework for a medical cannabis bill. According to a press release,

This is a clear message to the General Assembly and the public that the passage of the medical cannabis Bill is a priority for him and the Georgia House,” said Rep. Peake. “Secondly, Governor Nathan Deal has publicly stated that he will work with the legislature on medical cannabis legislation that is safe, legal, and supervised by doctors. Rest assured that these three guidelines are at the heart and core of this bill. We have studied similar types of legislation for months and heard from all those who hold a stake in the matter; therefore, I am confident that we will craft the best possible version of this bill. Finally, we cannot ignore the personal side of this story.”

“Since March 20, when last year’s bill failed, at least 15 Georgia families uprooted their lives and moved to another state to have access to medical cannabis. We need to bring them home. And tragically, three children, all of whom visited this Capitol earlier this year with their parents to fight for the passage of this bill, have died during the last six months. We cannot move fast enough. In honor and in memory of Abe, Trinity, and Mary Elizabeth, it is imperative that we, as elected officials of this state, come up with a safe, effective and timely delivery system of medical cannabis oil in Georgia, for these children and for our citizens.”

“House Bill 1, The Haleigh’s Hope Act, will be formally introduced during the 2015 legislative session and would provide for the regulated use of medical cannabis to treat certain medical conditions. The bill would only allow for the use of non-smoking medical cannabis, in the form of liquid, pill, or injection, and the bill explicitly states that the intent is not to legalize the use of cannabis for recreational purposes.”

“Under HB 1, only certain, registered patients would have access to the treatment, and it would only be dispensed by licensed, registered entities within the state. HB 1 would provide for a safe, effective, timely, tightly regulated, and secure infrastructure with strict state oversight for medical cannabis, which would contain a very low amount of tetrahydrocannabinol (THC).”

“Additionally, the bill would decriminalize the possession of medical cannabis oil in Georgia for those patients who legally obtained the medicine in another state. Lastly, the bill states that the General Assembly would create a strict regulatory system around the medicine’s production that satisfies the recommendations of the U.S. Justice Department.”

Peake told the Macon Telegraph that the version of the bill he introduced is not yet a final product.

At less than two pages, the bill is a sort of “mission statement,” not a finished product, Peake said.

The bill proposes a limited number of licensees to grow, manufacture and distribute medical marijuana in Georgia. The bill is limited to medicine that’s a liquid or a pill. No smoking would be allowed.

In fact, no compound with a THC content that could cause a high is part of the vision. The bill will set some THC cap yet to be settled. Instead, the medicines will be rich in other cannabis chemicals, such as cannabidiol, that do not cause a high.

“We believe the negligible amounts (of THC) would not be sufficient to cause someone to fail a drug test” by taking a Georgia-approved medicine, Peake said.

But just in case, Peake said the bill will contain language to protect both employees and employers’ drug-free workplace policies.

The bill will also list the diagnoses that will be eligible for a cannabis treatment. That list is not final, but it would at least include severe pediatric seizures.

The finished bill will be much longer than two pages, in part to avoid some of the unforeseen problems that developed in other states.

Under federal law, cannabis and all its products are illegal. In other states, nursing homes, hospitals and public housing have been wary of letting a federally banned substance onto their premises.

“We’re going to have a strict regulatory process,” he said.

State Rep. Harry Geisinger got out of the gates quickly with House Bill 2, yet another attempt to legalize horse racing with pari-mutuel betting. This bill typically either doesn’t make it out of the first corner, fades in the home stretch, or is euthanized out back of the Capitol. Geisinger has also introduced HB 5, a bill to legalize some uses of “drone” unmanned aircraft for photography and outlaw other uses.

State Rep. Barry Fleming has pre-filed House Bill 3, the “Todd Gurley” bill, to criminalize the act of offering money or goods to a student-athlete with knowledge that the transaction might cause the athlete’s loss of an athletic scholarship or suspension from athletics.