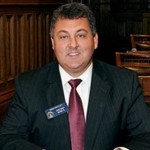 Sen. Steve Gooch (R – Dahlonega) was elected to serve as Majority Whip of the Senate Republican Caucus for the upcoming biennial legislative term of the Georgia General Assembly. In this role, Sen. Gooch’s primary responsibility will be to research legislation, educate and inform caucus members, and ensure a full caucus presence during important legislative votes. The Majority Whip is the third ranking leadership position within the Republican caucus.

“I’m honored to be elected as the next Majority Whip of the Senate Republican Caucus. I remain committed to defending core constitutional principles such as limited government and fiscal responsibility, and will remember these ideals when advising the caucus on legislation that will create a more prosperous Georgia,” said Sen. Gooch.

“Sen. Gooch is a committed, hard-working public servant who will serve with great distinction as majority whip. I appreciate his dedication to his district as well as to the Senate. I look forward to working with him and the rest of our leadership team to advance our agenda in the General Assembly,” said Lt. Gov. Casey Cagle.

The 153rd Legislative Session of the Georgia General Assembly will convene on January 12, 2015, at the Georgia State Capitol.