Peter Early was sworn in as Governor of Georgia on November 5, 1813 after being elected by the Georgia General Assembly.

John Clark was sworn in to the first of two two-year terms on November 5, 1819, again after election by the legislature.

Howell Cobb, who previously served as Speaker of the U.S. House of Representatives, was sworn in as Governor of Georgia on November 5, 1852, having been elected by popular vote.

Democrat Woodrow Wilson, who spent part of his youth in Augusta, Georgia and married Ellen Louise Axson, whom he met in Rome, Georgia, was elected President in a landslide victory on November 5, 1912.

Democrat Franklin Delano Roosevelt was elected to his unprecedented third term as President of the United States on November 5, 1940.

Richard M. Nixon was elected President of the United States by a plurality vote on November 5, 1968.

On November 5, 2002, Sonny Perdue was elected the first Republican Governor of Georgia since Reconstruction, beginning the modern era of Republican dominance of Georgia state politics.

First things first. In DeKalb County, we have a December 2 runoff election for County Commission District 2 between Nancy Jester and Holmes Pyles.

There was strong opposition to granting the City Redevelopment Powers.

Some citizens said one of their difficulties with the referendum was that it put too much decision making power in the hands of the current City Leadership and Council.

Others said the city “needs to slow down”, “get great at the basics” and then, perhaps, when those things are accomplished, look at Redevelopment Powers at some point on the future.

Just because you know the clowns doesn’t mean you want to spend all your money on circus tickets.

“We’re very excited. It’s a big win for the city, obviously,” said Mayor Teresa Tomlinson. “We can’t wait to use it to improve parts of the city.”

With all 145 precincts reporting, 110,903, or 53 percent, voted to extend the special purpose local option sales tax for another six years, compared to 99,012, or 47 percent, voting against the renewal.

The county estimates it will collect $750 million in revenue from the tax over its six-year life, which it will use to fund a variety of transportation, parks and recreation and public safety projects.

Howard easily defeated Democratic challenger Jay Trevari, winning by a margin of 61 to 39 percent. With 45 out of 46 precincts reporting, Howard had 26,686 votes to Trevari’s 17,170.

“I just can’t believe it,” Howard said. “The support is so strong, it’s just a very humbling thing that I got that many votes.”

Howard, who was first elected to the Gwinnett County Board of Commissioners in 2010, credited her supporters with providing “great energy” for the campaign and said they helped keep her motivated throughout.

“They have been fantastic and I thank every one of them,” she said.

According to Howard, volunteers have worked long hours putting up signs and knocking on doors to get out the word about her campaign.

“I’m certainly grateful that the voters in Decatur County believe in me,” Cleveland said. “I know I have some work to do to earn the trust of the rest of them. Hats off to Ben Kirbo. I wish him the best and thank him for a good race.”

Constitutional Amendment #1
Shall the Constitution of Georgia be amended to prohibit the General Assembly from increasing the maximum state income tax rate?

Constitutional Amendment #2
Shall the Constitution of Georgia be amended to allow additional reckless driving penalties or fees to be added to the Brain and Spinal Injury Trust Fund to pay for care and rehabilitative services for Georgia citizens who have survived neurotrauma with head or spinal cord injuries?

Statewide Referendum A
Shall property owned by the University System of Georgia and utilized by providers of college and university student housing and other facilities continue to be exempt from taxation to keep costs affordable?

Dalton State College is likely to expand after passage of Statewide Referendum A.

“Assuming the numbers hold and the referendum does pass, we believe this is a big vote of confidence for the University System, and locally, a big vote of confidence in Dalton State College,” said David Elrod, director of the Dalton State Foundation. “Locally, a lot of people want to see the college grow, and a lot of people believe that taking the next step with student housing is a key way for us to grow. We couldn’t be more pleased with this result.”

Proponents of the referendum say it will save the University System money and allow for growth throughout.

For Dalton State, that growth could come sooner, rather than later.

According to Elrod, Dalton State is one of nine campuses where a developer has already proposed to build new student housing if the referendum passed — officially, the measure goes into effect on Jan. 1, 2015.

“We are on the ready and this (vote for approval) puts us on the go,” Elrod said. “We can take the next step, which is to transfer our property to the state of Georgia. A developer would then come in next summer and remove the existing apartment buildings to build new housing there. We would see new student housing open up on our campus in 2016.”

The property referenced is the former Wood Valley Apartments, purchased by the Dalton State Foundation in 2005, which includes 11 acres adjacent to the college. Some of that 11 acres would be deeded over to the Board of Regents for what could be a college dormitory with as many as 350 rooms. The building could be open in time for the 2016 fall semester at Dalton State.

“This vote helps fulfill a long-time expectation of the community for this college to become a traditional, full-fledged, four-year institution that includes everything that goes along with that,” Elrod said. “We are well on our way.”

[T]he referendum concerning the sale of alcoholic beverages on Sunday in the unincorporated portions of Walker County was defeated by a slim margin: 5,827 ballots were marked “yes” to allowing Sunday sales while “no” was marked on 6,626 ballots. 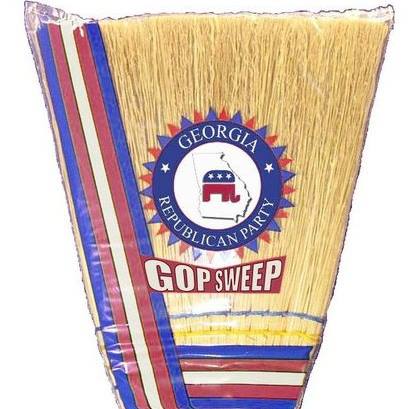 Don Cole had sent me his predictions on Sunday afternoon and he pretty much nailed it.

Last week, on GPB’s Political Rewind, both Eric Tanenblatt and I predicted Deal and Perdue winning without runoffs (the good part of that audio with the predictions of no runoff elections starts around 27 minutes in).

We’ll have plenty more analysis tomorrow and the rest of the week, but for now I’ll close with this: my personal congratulations to:

Public Service Commissioner Chuck Eaton, whose colleagues reelected him to a second term as Chairman.

Nancy Jester, who heads to a runoff for DeKalb County Commission District 2 on December 2, 2014.

State Representative Kevin Tanner, who did the unthinkable, as a Freshman member of the State House, he passed a Constitutional Amendment, which then went on to win passage in the statewide referendum.