Bacon, Barrow, Candler, and Evans Counties were created on November 3, 1914 when voters approved Constitutional Amendments – prior to these Amendments, Georgia was limited to 145 counties. On the same day, Carl Vinson was elected to Congress from Georgia, becoming the youngest member of Congress at the time. Vinson would eventually become the first Member of Congress to serve more than fifty years. Vinson’s grandson, Sam Nunn would serve in the United States Senate.

Laika, a female Siberian Husky mix who was found stray on the streets of Moscow, was launched into space aboard Sputnik 2 on November 3, 1957.

On November 3, 1968, Democrat Lyndon B. Johnson was elected President over Republican Barry Goldwater.

On November 3, 1970, Jimmy Carter was elected Governor of Georgia.

The representative from Forest Park had built up enough respect and prestige during his 42 years in the house that Speaker of the House Tom Murphy made him chairman of the powerful House Rules Committee. In that position, he decided which legislation came to the House floor for a vote by the full body.

“Because he was the chairman of the Rules Committee, he was the second most powerful person in the House,” said former state Rep. Ron Dodson, who was Lee’s hand-picked successor in the legislative body.

Lee, who served in the House from 1956 until 1998, died Wednesday, according to his obituary which ran in Friday’s Clayton News Daily. He was 88.

Republican Senate candidates are pulling away in the final days of key races, according to polls released this weekend.

Republicans are either leading in Georgia, Kentucky and Louisiana or will likely win runoff elections, according to a NBC/Marist poll released Sunday.

In addition, the Republican nominee in Iowa, Joni Ernst, now has a 7-point lead over Democratic challenger Rep. Bruce Braley, according to a Des Moines Register poll released Saturday.

Most polls have shown until now that the four races have essentially been deadlocked in the closing weeks.

The GOP needs to win a net total of six Senate seats to take control of the chamber, with essentially only the West Virginia and Montana contests apparently in hand.

National leadership of both major parties see this year’s elections breaking in favor of Republican candidates, according to the New York Times:

Republicans entered the final weekend before the midterm elections clearly holding the better hand to control the Senate and poised to add to their House majority. But a decidedly sour electorate and a sizable number of undecided voters added a measure of suspense.

The final drama surrounded the Senate, which has been a Democratic bulwark for President Obama since his party lost its House majority in 2010. Republicans need to gain six seats to seize the Senate, and officials in both parties believe there is a path for them to win at least that many.

Yet the races for a number of seats that will decide the majority remained close, polls showed, prompting Republicans to pour additional money into get-out-the-vote efforts in Alaska, Georgia and Iowa. Democrats were doing the same in Colorado, where they were concerned because groups that tend to favor Republicans voted early in large numbers, and in Iowa.

While an air of mystery hung over no fewer than nine Senate races, the only question surrounding the House was how many seats Republicans would add. If they gain a dozen seats, it will give them an advantage not seen since 1948 and potentially consign the Democrats to minority status until congressional redistricting in the 2020s.

The New Yorker points to three bad signs for Democratic candidates, two of which are salient in the Peach State.

1) Gravity in the South: the Democrats have been fighting a valiant rearguard action, gravity appears to be exerting itself, with G.O.P. candidates such as Thom Tillis, Tom Cotton, and David Perdue benefiting from the strong anti-Obama sentiment among white voters.

3) The generic ballot: In a briefing at the Bipartisan Policy Center this week, Whit Ayres, a Republican pollster, pointed to recent surveys that show Republicans gaining in head-to-head matchups against Democrats. “There hasn’t been a lot of hard evidence in the polling in these various states, up to this point, of a big wave coming,” he conceded. “Within the last week to ten days, we’ve started to pick up some of the thunderstorms developing.” Actually, the trend toward the G.O.P. in the generic ballot seems to go back further than that. A graph from Real Clear Politics that tracks the head-to-head questions in all the major surveys shows that for most of this year (and all of last year) the Democrats had the lead. But since mid-September, that’s been reversed, and the Republicans are now ahead by 2.5 percentage points. In a couple of recent polls—from CBS News and the Washington Post/ABC News—the G.O.P. lead has been more than five points.

Like in Louisiana, the Georgia race goes to a runoff if no candidate reaches 50 percent. In a hypothetical head-to-head matchup between just Perdue and Nunn, the Republican leads 49 percent to 46 percent.

Both candidates are reasonably well-liked. Forty-seven percent have a favorable impression of Perdue, compared to 42 percent who have an unfavorable one; Nunn has a 49 percent favorable rating compared to 39 percent who view her negatively.

In a hypothetical runoff, Deal leads 50 percent to Carter’s 46 percent.

Following the release of the NBC poll, Nate Cohn of the New York Times Upshot writes that Michelle Nunn’s chances are collapsing.

[M]ost polls over the last week or so show Mr. Perdue retaking a lead, with Ms. Nunn now trailing by about two or three percentage points.

Mr. Perdue’s gains come from white voters. He now leads Ms. Nunn by about 40 percentage points among whites, up from 37 points in the polls after Mr. Perdue’s outsourcing comments were published.

For all of the justifiable focus on the rapid pace of demographic change in Georgia, the reality was always that Ms. Nunn needed to come near 30 percent of the white vote to have a shot at breaking 50 percent, even under the most optimistic scenarios for black turnout. But the most recent polls give Ms. Nunn only around 25 percent of the white vote.

A favorable turnout among blacks might well be unfolding for Democrats — the black share of early voters has matched that from 2012 — but with 25 or 26 percent of the white vote that’s probably enough for Ms. Nunn to receive only around 47 or 48 percent in total after allocating undecided voters.

Ms. Nunn’s performance among white voters is fairly impressive. It will rival or perhaps exceed the best performance by a Georgia Democrat seeking federal office over the last decade. But it will probably leave her a smidgen short of victory.

In my opinion, Governor Nathan Deal will be reelected without a runoff, as the RealClearPolitics aggregation of recent polls have shown him an average of 4 points up over Jason Carter and not a single poll in the last two weeks has shown Carter winning. Huffington Pollster shows a 4.6 point lead for Deal.

David Perdue’s path to victory over Michelle Nunn without a runoff is less clear, with RealClearPolitics showing Perdue up 1.8 points and Huffington Pollster showing Perdue’s lead at 2.8%

Governor Deal has been endorsed for reelection by:

Deal has the necessary experience to guide this state out of its economic doldrums and won’t be hampered by the partisan divide that would surely face Carter with the House and Senate firmly controlled by Republicans.

Let’s talk about how Georgia’s unemployment has dropped from 10.9 percent to 7.7 percent while Deal has been governor.

Let’s talk about the estimated 295,000 jobs that have poured into the state’s economy under Deal’s watch.

Let’s talk about Georgia’s per-capita state taxes that are among the nation’s lowest.

Let’s talk about balanced budgets. Georgia has had three under Deal, all without raising taxes.

Businesses and industries are swarming to Georgia, and Deal is committed in his second term to make it even easier for people to do business in and with our state.

All that points to the type of fiscal sanity Georgians must keep.

And what happens if Deal isn’t elected? The Democratic candidate for governor is Jason Carter, who brings to the table all of four years’ worth of political experience as a state senator, representing a small portion of DeKalb County in metro Atlanta.

If you’d like another example of what happens when a liberal candidate with little Senate experience ascends to the position of a chief executive, look at the White House today and what its occupant’s past six years have wrought.

Georgia simply doesn’t need liberal leadership, under any name or wrapped in any moderate-looking sheep’s clothing.

In a nation where so many aspects of our federal government are failing Americans, our state needs a strong, conservative chief executive to protect Georgians’ interests.

Our recommendation is to stick with the guy who has gotten things done.

[U]nlike Mr. Carter, Mr. Deal has passed the leadership test in key areas that matter to Georgians: The economy, education, health care, fiscal responsibility and criminal justice reform. And he has done it by working with Democratic leaders like Atlanta Mayor Kasim Reed and showing a bipartisan streak that has rankled some rock-rib Republicans. When he took office four years ago, Mr. Deal had grand plans to cut taxes by $1.6 billion. But reality intruded. State revenues and federal funds slumped. Pressures on the popular HOPE scholarship increased. Since Georgia must have a balanced budget every year, the governor worked with lawmakers on both sides of the political aisle to deliver balanced spending plans for every one of his four years — and, without a tax hike.

We have no doubt that regardless of the outcome of this fall’s election, Georgians will not have heard the last of Jason Carter — not by a long shot. But for now, a vote for Carter would put Georgia on a left-leaning course, a course toward the worldview espoused by his grandfather and embodied by President Obama (for whom Jason Carter readily admits to having voted). 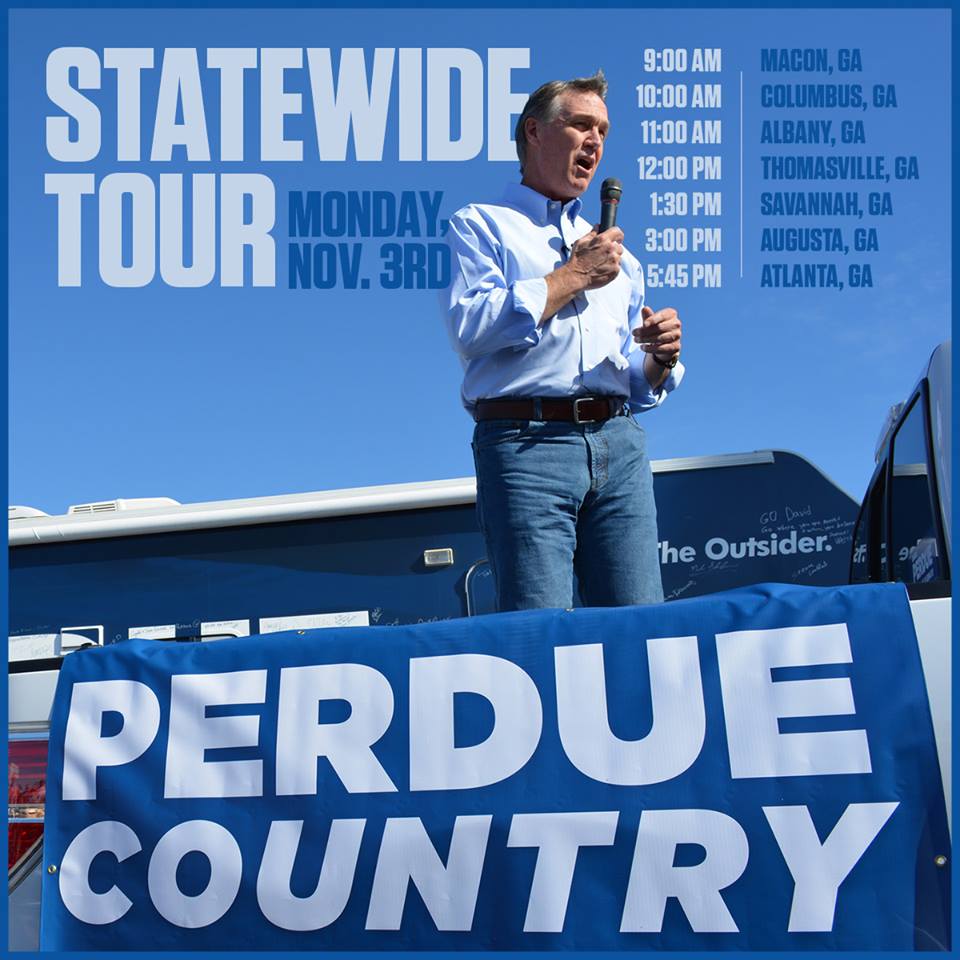 We encourage all members and friends of the Buckhead Freedom Coalition, Tea Part…

Election Day is right around the corner! And while we are all working around the…