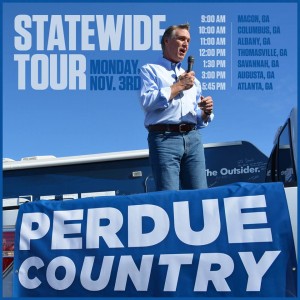 In the final debate before Election Day, conservative businessman David Perdue proved once again that he’s the right person to represent Georgia in the United States Senate. During the debate hosted by WSB-TV of Atlanta, Perdue highlighted his record of success in the private sector and his commitment to representing the state’s strong conservative values in Washington.
“Michelle Nunn isn’t fooling anyone,” said Georgia Republican Party Chairman John Padgett. “Her false commercials and lofty rhetoric can’t hide the fact that she’s President Obama’s handpicked candidate for the United States Senate.  If elected, she will serve as nothing more than a rubber stamp for the Obama and Reid failed agenda that is threatening Georgia’s future.

“Thankfully, Georgians have a clear choice at the ballot box on Tuesday.  David Perdue is a bold leader who will fundamentally reform the federal government and faithfully represent our values in Washington.  David has a proven record that we can trust and a vision for our country’s future that we can all embrace.  With David’s vision and leadership, we can finally get America back on track and start moving in a new direction.”