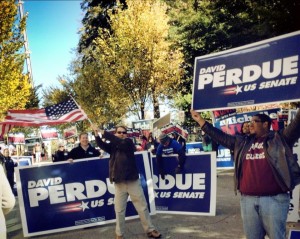 “Today’s debate sealed the deal as far as how Tuesday’s election will go: Georgians will elect David Perdue to the United States Senate. The choice in this election is simple, and the candidates reaffirmed where their priorities are: Michelle Nunn wants to deceive Georgia voters in order to become Barack Obama’s Senator, while David Perdue spoke substantively about how he will be Georgia’s Senator.

“With so little time left in the campaign, one would think Michelle Nunn would want to clarify for voters where she actually stands on the issues that impact their lives. Instead, she again focused her time trying to tear David down with false, personal attacks. Nunn’s style of campaigning – and debating – is one of distraction and deception and it represents the behavior in Washington that Georgians are sick of.

“David Perdue, on the other hand, is focused on solving the problems that affect families right here in Georgia. He will make sure hardworking folks have good paying jobs, helping them save for their children’s college education and for their retirement. As a result, David will help provide the kinds of economic and educational opportunities that will build a better future for all Georgians.

“President Obama was right when he said ‘every single one’ of his policies are on the ballot, and in Georgia they go by the name Michelle Nunn. It’s also clear why Obama doubled down with a ringing endorsement on Atlanta radio, because Michelle Nunn wants to go to the Senate to fight for him. Unfortunately for Obama and his failed policies, David Perdue will go to Washington to fight for Georgia.”