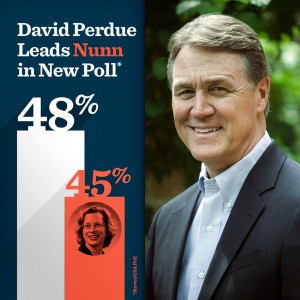 A new WXIA-TV poll conducted by SurveyUSA shows that Georgians are excited for a new direction in Washington. With a “5-point right turn in one of the nation’s most high-visibility contests,”David Perdue now leads 48-45 over his liberal opponent.

Speaking about the results of the new poll, Perdue spokesman Mark Bednar said: “Our campaign continues to gain momentum because Georgians know that David Perdue has the right experience and vision to get our country back on track. Like so many Georgians, David knows Washington has gotten us into this mess, and it will take a true outsider to get us headed in the right direction. That’s why he will go to Washington to grow our economy and create jobs, repeal and replace Obamacare, and create more opportunity for all Georgians. It’s clear that voters want a Senator who will work for Georgia, not a Senator who will work for President Obama.”