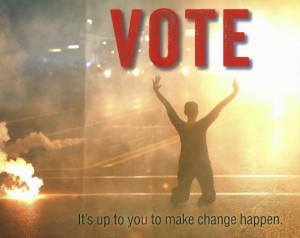 Last night, Jason Carter had the opportunity to show boldness, integrity, and leadership.

At a televised debate hosted by WSB-TV of Atlanta, Greg Bluestein asked Carter to weigh-in on the infamous mailer sent out by the Georgia Democratic Party that urged the African American community to vote “if you want to prevent another Ferguson.”

What was Carter’s response?

“I haven’t seen the flier you are talking about.”

Really? From The Wall Street Journal to The Atlanta Journal Constitution, The New York Times to Fox News and The Huffington Post, media outlets throughout the state and country have reported and weighed in on this controversial and downright despicable attempt to mislead Georgia voters. But Jason Carter claims to know nothing about it.

I have a hard time buying that one.

And while I’m disappointed that Jason Carter didn’t take the time allotted to condemn the mailer or at least caution Party leaders to think twice about engaging in overt race baiting, this isn’t the first time he’s collapsed under the pressure.

When the DeKalb County School System risked losing it’s accreditation, Carter – who served as their Senator – was missing in action.  Thankfully, Governor Deal stepped up to the plate and found a way to put the failing school system back on the right track.

You see, Jason Carter is proving to be a “hide and seek” politician.  He hides from tough questions and difficult, politically damning issues but still seeks higher office.  Enough with the political games.  Georgia deserves better.

Join me in backing Nathan Deal – a bold leader with the integrity needed to move Georgia forward.  He won’t back down from a fight.  He won’t make excuses.  We can count on Governor Deal to lead when Georgia needs him the most.