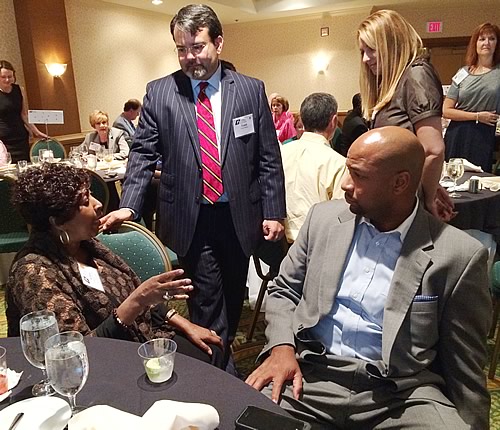 The key to victory for the gubernatorial and senate candidates will be women, said political strategists Tharon Johnson and Todd Rehm. At the GMA’s Legislative Policy Council (LPC) meeting this week, Johnson and Rehm discussed the upcoming elections for governor and Georgia’s next U.S. senator.

“Independents, especially women, are going to be the key for election for both the governor’s race and the senate,” said Rehm, a Republican political consultant and blogger.

Johnson, a Democrat political consultant, said he’d advise Senate candidate Michelle Nunn to run commercials featuring her father, former Senator Sam Nunn. “Knowing that [David] Perdue is going to get more old white guys, put your dad on TV to get the older voters who remember and liked him.”

Both agreed that the outcome of this election could make Georgia a true battleground in the future. Carter and Nunn have shown that Democrats stand a chance this year which will bring more national attention to the state in the 2016 presidential election.

Johnson noted that if the gubernatorial and senate races go into runoffs, “the state is going to explode” with outside money for the candidates. Republicans traditionally have the edge in runoffs, but a Democratic upset is not unheard of, he said.

During the moderated discussion, Rehm noted that the GOP has difficulty expressing how its positions benefit individuals. Georgia is doing well with attracting jobs, said Rehm, but “we have not figured out how to say that without sounding like we’re condescending” to the people who are still struggling.