Today is Leif Erikson Day, celebrating the Norse explorer being the first European to visit North America. From Mental Floss:

While the actual date of Leif Erikson Day doesn’t have anything personally to do with Leif, it was picked for the holiday because it’s the anniversary of the day that the ship Restauration arrived in New York from Stavanger, Norway, back in 1825. The arrival of the Restauration marked the beginning of organized immigration from Scandinavia to the USA. The holiday was first recognized by Wisconsin in 1930, eventually becoming a nationally observed holiday in 1964.

On October 9, 1963, the Board of Regents approved a new junior college in Cobb County that is today Kennesaw State University. The next year, Cobb County voters approved a bond referendum to fund construction.

United States Senator Sam Nunn announced on October 9, 1995 that he would not run for reelection. From CNN’s contemporary story:

“I know in my heart it is time to follow a new course,” Nunn told reporters gathered in the Georgia State Capitol. He said his decision followed “a lot of thought and prayer” and he expressed enthusiasm about meaningful days ahead in the private sector.

“Today I look forward to more freedom, to more flexibility,” he said, adding he planned to spend time with his family, to write, and “devote a substantial amount of time” to public policy and public service. He said he has no immediate plans for a presidential bid.

Nunn hailed America as “the greatest country in the world,” but cited problems that need attention, including education concerns, illegitimate children, and widespread violence and drugs. He expressed optimism on such items as the strong military and entitlement reform.

The Chicago Tribune reported that Speaker of the House Newt Gingrich said of Sam Nunn’s retirement,

“For those who listened carefully, it is clear that the Democratic Party is not the vehicle for the values outlined by Sen. Nunn.”

Nolan Waters of Knight-Ridder wrote of the announcement,

Nunn’s departure is a watershed.

“Nunn is the last of the great moderate Southern Democrats. This creates a huge hole for the party,” said Merle Black, a specialist on Southern politics at Emory University in Atlanta.

Nunn, like President Clinton, helped organize a group of moderate Democrats, the Democratic Leadership Council, in an attempt to move the party rightward after the 1984 landslide re-election of President Reagan.

“He has been fighting the liberal wing of his party for over two decades,” Black said. “It’s been a losing battle.”

Earlier this week, longtime journalist George Chidi wrote about the disturbing history of Tom Owens, who is running as a Republican in the November 4 Special Election for DeKalb County Commission. Here’s a short excerpt:

The 62-year-old Vietnam veteran and anti-immigration activist [Tom Owens] has a years-long history of legal trouble tied to harassment of political figures, acquaintances and romantic targets. He pleaded no contest to a stalking charge in Forsyth County, with a note in the documentation tying his behavior to mental health issues. At least three people have obtained restraining orders against him in the last eight years, the most recent of which expired this year.

Meanwhile, the head of a Christian religious charity found herself filing a police report less than five months ago, complaining that Owens had come to her to her thrift shop to berate her for her insufficient hate toward African Muslims … spitting on the shop doors while he was at it.

Then at a debate hosted by the Dunwoody Homeowners’ Association, this happened:

[Tom] Owens and a friend, Joe Newton of Gwinnett County, got into a shouting match with George Chidi, a blogger for Peach Pundit.

Chidi has published a blog post investigation of Owens’ background, discovering stalking charges, restraining orders, harassment of candidates and a lingering feud with the imam of a mosque behind his home. Owens didn’t appear to like it.

Tom Owens then ran to DeKalb County and took out a Temporary Protective Order against George Chidi, vaulting this into the national media and becoming an embarrassment to the Republican Party. From the Associated Press story:

A Georgia politician got a temporary restraining order earlier this week against a journalist blogger he accuses of threatening and harassing him.

The writer, George Chidi, denied threatening the politician and said the move is a way for the candidate to avoid answering questions about his past ahead of an upcoming election.

Chidi said he’s writing a book on civic engagement in Georgia and wanted to interview DeKalb County Commission District 1 candidate Tom Owens about the public’s perception of him.

“I hadn’t approached him until he became a public figure,” Chidi said. “He’s running for a seat that’s open because the incumbent has resigned and is going to jail for corruption charges.”

“The principle of this is severely damaging to the civil process and to journalism,” Chidi said. “If a candidate for public office can shut off unfavorable coverage by abusing the temporary protective order process without penalty, that is going to happen to everybody. It is a standard practice to say that questions that you don’t like are harassment,” Chidi said.

Even more damaging is the assertion that a journalist can violate a TPO from his laptop.

On Wednesday, Chidi told HuffPost that he had also been served with a notice that he had violated the order by “contacting third parties via social media.”

Chidi said that he’s worried his case could set a dangerous precedent for journalists who write unfavorably about politicians.

“Imagine a politician who can shut off a journalist covering him in the month before an election when everybody is paying attention to politics,” he told HuffPost. “It is chilling. It makes it much more fraught to report on issues of public importance, particularly around politics.”

“It’s dangerous to the public to have a court tell a journalist to stay away from public figures and political candidates,” Chidi added.

“His assertion that I said I was out to ‘destroy’ Tom Owens is an error at best, and a fabrication at worst. I didn’t say it,” Chidi responded via email. “The commission race has almost nothing to do with my very small town and absolutely nothing to do with my personal politics. I make no effort to conceal those — I’m a card-carrying progressive Democrat — but there’s no Democrat even running for the seat.”

Witter sent HuffPost a video that he claimed showed Chidi harassing Owens at a candidate forum on Sunday. In the video, Chidi can clearly be heard telling Owens that he is a reporter. When Owens declines to answer his questions, Chidi begins shouting them.

Though we are polar opposites, I consider George Chidi a friend and will donate to his defense fund. You can join in the defense of the First Amendment against politicians who prefer not to answer legitimate questions about their history by donating today.

Survey USA received an ‘A’. The firm used by the AJC, Abt SRBI, was given a ‘B+’. Public Policy Polling of North Carolina was graded at ‘B-‘. Landmark Communications got a ‘C+,’ and InsiderAdvantage was given a ‘D.’

One Georgia firm took the win in worst performance over the time surveyed.

Here’s the bigger point, I think, from Silver,

[T]he differences in poll accuracy aren’t that large. We estimate that the very best pollsters might be about 1 percentage point more accurate than the average pollster over the long run. However, the average poll in our database missed the final election outcome by 5.3 percentage points. That means even the best poll would still be off by 4.3 points. It’s almost always better to take an average of polls rather than hoping for any one of them to “hit a bullet with a bullet.”

Nate Cohn, writing in The New York Times, tackled an issue about which we have written extensively – the effect of African-American turnout and weighting of polls in Georgia.

No other plausibly competitive state has seen a more favorable shift for Democrats in the racial composition of eligible voters over the last decade. The pace of demographic change is so fast that Michelle Nunn, a Democrat, is locked in a tight race against the Republican David Perdue for an open Senate seat — even with an off-year electorate that is favorable for the G.O.P.

The pace of demographic change might even be fast enough to outpace the polls.

Polls show Mr. Perdue leading Ms. Nunn by about three percentage points. The various Senate models, including The Upshot’s, give Ms. Nunn about as good a shot — roughly 20 percent — of winning as Democratic incumbents in Louisiana, Arkansas and Alaska. But there’s reason to wonder whether her chances are better still: Recent polls are most likely underestimating the share of voters who are black, along with Ms. Nunn’s share of the vote.

According to data from the Georgia secretary of state, the 2010 electorate was 66.3 percent white and 28.2 percent black. Since then, the white share of registered voters has fallen, to 58 percent from 62.6 percent. White voters turn out at somewhat higher rates than other voters in midterm election, so we should expect the white share of the actual vote to be a little higher. Combining the data on registered voters with census data on the voter-eligible population, I expect the 2014 electorate to be about 64.2 percent white and 28.8 percent black. (Ms. Nunn is expected to win at least 90 percent of the black vote.)

Yet the last four nonpartisan polls that released demographic data showed an electorate that’s 65.7 percent white and 25.7 percent black. Those polls show Mr. Perdue ahead by 3.3 points, but they would show something closer to a dead heat if the likely electorate matched my estimates.

During this cycle, we have been estimating African-American turnout as constituting roughly 30% of the November electorate. But there’s a complicating factor. It’s name is “unknown.” In 2012 statistics from the Secretary of State, more than 200,000 voters from the General Election were recorded as having “unknown” race or gender. That’s roughly 5.5% of votes cast that year, and that complicates calculations of race and gender for weighting purposes. We’ve dealt with that and with the very low numbers of self-identified Asian, Hispanic, and Other race voters by combing them with “unknown” under the heading of “other”.

When pollsters are arguing about 2-3 points of African-American participation and the results on poll results, having 5.5% of voters as “unknown” could affect the accuracy of polling that uses weighting for race as part of the methodology.

I also want to note briefly that Erick Erickson and I agree on our general approach to polls and polling from public sources. The other day, he discussed the issue on his radio show, saying:

I think we put too much stock in polling as an easy way to generate news… I don’t think we should…. I pay attention to the polling averages.”

I disagree with a lot of the other stuff that Erickson says on that particular show, but on this I agree. Today, Huffington Pollster has Governor Deal at 47.3% to Democrat Jason Carter with 41.8% while RealClearPolitics has Deal at 47.3% and liberal Jason Carter at 43.8%. 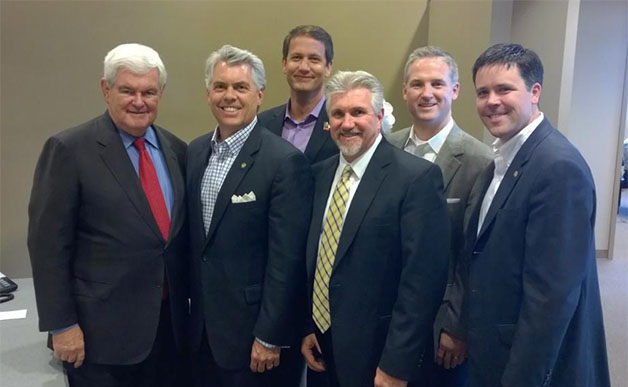 Giant Yard Sale. If you want it, we probably have it. Designer clothes; Ralph La…