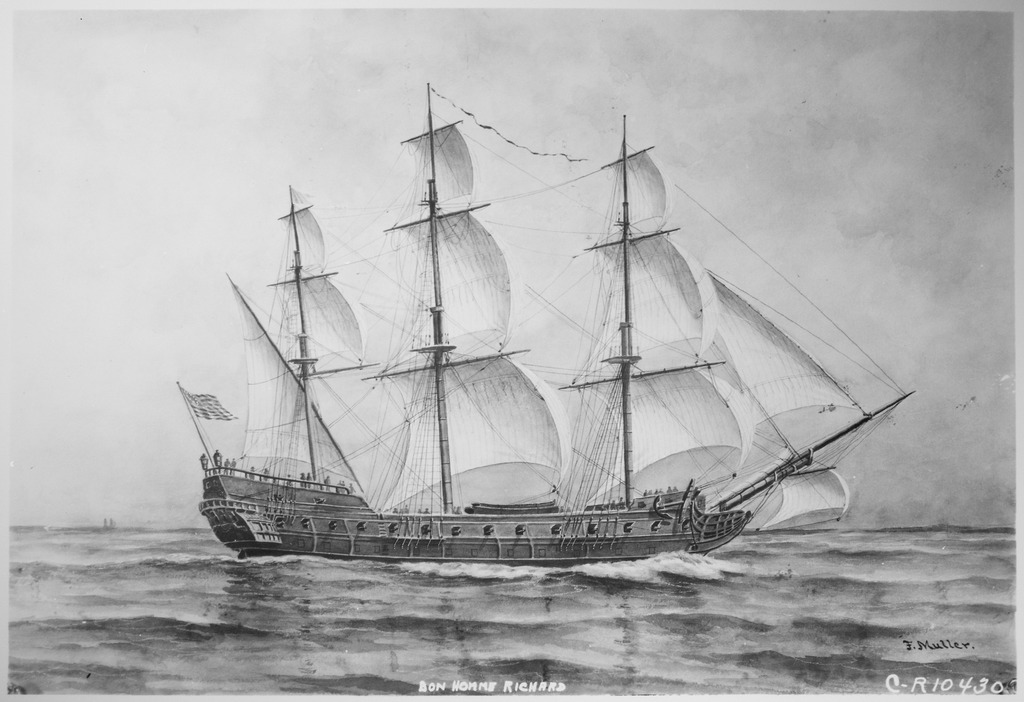 John Paul Jones, at the helm of US ship Bonhomme Richard, won a naval battle off the coast of England on September 23, 1779.

After inflicting considerable damage to the Bonhomme Richard, Richard Pearson, the captain of the Serapis, asked Jones if he had struck his colors, the naval sign indicating surrender. From his disabled ship, Jones replied, “I have not yet begun to fight,” and after three more hours of furious fighting the Serapis and Countess of Scarborough surrendered to him.

Meriwether Lewis and William Clark returned to St. Louis Missouri from their exploratory trip to the Pacific coast on September 23, 1806.

On September 23, 1944, President Franklin Delano Roosevelt was speaking at a dinner with the Teamsters union and addressed attacks that had been made by Republicans, including the allegation that after leaving his dog, Fala, behind in the Aleutian Islands, he sent a Navy destroyer to fetch the dog. This would become known as the “Fala speech.”

These Republican leaders have not been content with attacks on me, or my wife, or on my sons. No, not content with that, they now include my little dog, Fala. Well, of course, I don’t resent attacks, and my family don’t resent attacks, but Fala does resent them. You know, Fala is Scotch, and being a Scottie, as soon as he learned that the Republican fiction writers in Congress and out had concocted a story that I’d left him behind on an Aleutian island and had sent a destroyer back to find him—at a cost to the taxpayers of two or three, or eight or twenty million dollars—his Scotch soul was furious. He has not been the same dog since. I am accustomed to hearing malicious falsehoods about myself … But I think I have a right to resent, to object, to libelous statements about my dog.

The idea for the joke was given to FDR by Orson Welles. The political lesson here is that any time you get an audience laughing at your opponent, you are winning.

A statue of former Georgia Governor Eugene Talmadge on the grounds of the Georgia State Capitol was unveiled on September 23, 1949, the 65th anniversary of Talmadge’s birth near Forsyth, Georgia in 1884.

On September 23, 1952, Senator Richard M. Nixon was under fire for allegedly accepting $18,000 and using it for personal expenses. To salvage his place as the Vice Presidential candidate on Eisenhower’s Republican ticket, Nixon took to the airwaves in the first nationally-televised address and delivered what came to be known as the “Checkers Speech. From The Atlantic:”

[A] 1999 poll of leading communication scholars ranked the address as the sixth most important American speech of the 20th century — close behind the soaring addresses of Martin Luther King, Jr., John F. Kennedy and Franklin Delano Roosevelt.

The “Checkers” speech wins this high rank for one stand-out reason: It marked the beginning of the television age in American politics. It also salvaged Nixon’s career, plucking a last-second success from the jaws of abject humiliation, and profoundly shaped Nixon’s personal and professional outlook, convincing him that television was a way to do an end-run around the press and the political “establishment.”

Click here for the full text of the “Checkers Speech.”

And in the race for United States Senate:

It is a fundamental flaw and a sign of laziness in a poll of Georgia elections to not include the name of the third party candidates.

The Washington Post column on politics called The Fix wrote yesterday that Republicans are a slight favorite to gain control of the Senate, and specifically,

For those wondering about Kentucky and Georgia — Democrats’ other two pickup opportunities — both seem to be fading from sight.  All three models show Republicans with a strong chance of holding both seats. In Kentucky, the probabilities range from 85 percent to 99 percent; in Georgia it ranges from a 77 percent chance of a Republican victory to a 95 percent one.

Forget the “War on Women,” it’s a “War for Women’s Votes”

We’ll start with Perdue’s presser, which focused on two EEOC complaints that Nunn’s camp unintentionally exposed in the infamous series of memos that leaked this summer. State Rep. Lynne Riley and other GOPers wrote a letter demanding that Nunn release the complaints, which haven’t been made public yet.

“The only way for Georgians to know the truth is for you to voluntarily release this information,” said the letter. “Why haven’t you done so already?”

They then marched over to Nunn’s event to deliver that letter to the Democrat’s campaign manager, a stoic Jeff DiSantis, as a few dozen Nunn supporters chanted “go blue” and “equal pay.” As you can see in the above video, they were briefly held up by state troopers.

Once the Republican gaggle was out of earshot, the Democrats proceeded to pummel Perdue over whether he’d back the stalled-out Paycheck Fairness Act. That bill aims to narrow the persistent pay discrepancy between women and men.

“All we want to do is go to work and be treated as equals, leave behind gender-based discrimination,” said Orrock, an Atlanta Democrat.

Here’s why the Democrats are talking about Paycheck Fairness, from polling earlier this year:

A strong majority (60%) of voters are also likely to use a candidate’s support for policies that have a direct impact on working families as a vote-determinant. This includes 84% of Democratic women, 57% of Independent women and 53% of Republican women. 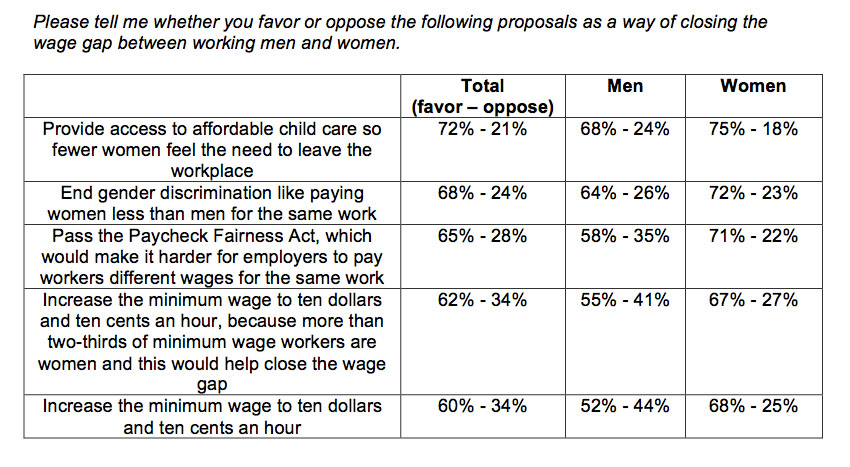 The distinction was sharpened in an Atlanta Journal-Constitution poll released Sunday. Democrat Jason Carter led Republican Gov. Nathan Deal by 10 points with female voters, and women gave Michelle Nunn a three-point advantage over Republican David Perdue in the Senate contest. Other recent polls have portrayed an even wider gap between male and female voters.

Susan Carroll, a Rutgers University political scientist who has studied the gap, said ultimately many women end up voting on the “kitchen table” issues such as the economy and education.

“Men are much more likely to be in favor of cutting back on government than women are,” Carroll said. “Women, even if they want to cut back, care more about protecting the safety net. Over time, that’s factored pretty seriously into the gender gap.”

Rural issues in the Senate election are also getting significant attention. Rural health care has become a Rorschach test for the candidates’ views on Obamacare.

In her response, Nunn, a Democrat, calls for expansion of the Medicaid program in the state as outlined by the Affordable Care Act.

Expansion “would enable over 600,000 low-income Georgians to sign up for Medicaid and allow rural hospitals to receive payments for services to people who were previously uninsured,” Nunn said. “By not expanding Medicaid, Georgia will lose $33.7 billion in federal funding from 2013 to 2022, while our tax dollars are spent in other states.”

Perdue, rather than implement more of the ACA, would go in the opposite direction. The Republican candidate supports a plan by U.S. Rep. Tom Price, R-Ga., to repeal the ACA and embrace free-market solutions to the problems of health care.

He blasts the ACA, often known as Obamacare, for ending government payments to hospitals that treat a large share of low-income patients, and for “driving insurance companies out of many underserved areas, and causing health care premiums to spike on the remaining plans.”

Democrats see rural voters as a group where they can make headway.

While Kentucky’s electorate is more rural than Georgia on a percentage basis, the Peach State has many more rural voters based on population. Democratic nominee Michelle Nunn is trying to run as a centrist in the mold of her father, Sam, whose long career in the Senate ran from 1972 to 1996.

While Democrats point to the growing numbers of African-American and Latino voters as a sign of the state’s purple-trending demographics, the fact is that a significant infusion of rural voters in central and south Georgia will have to cast a ballot for Nunn if she is to defeat businessman David Perdue for the seat held by outgoing Republican Sen. Saxby Chambliss.

Keith McCants of tiny Oglethorpe, Ga. is perhaps his state’s most knowledgeable expert on rural politics, and he has a lot to say about what Nunn needs to do to be competitive over the final weeks in the rural counties.

McCants, who runs the respected Peanut Politics blog, said Nunn has two tasks in wooing rural voters. First, she must motivate “Obamacrats,” the rural black voters in the 1st, 2nd and 8th Congressional Districts who don’t come out to midterm elections like they do when Obama’s name is on the ballot. Second, McCants says Nunn needs independents and voters 55 and older to break her way. “Everyone assumes if you’re white and rural, you’re a Republican,” he laments.

As for Nunn’s field operation, McCants notes places like Tifton and Waycross have no organizers while “Perdue has a ground game [in the rural counties] and its going strong.”