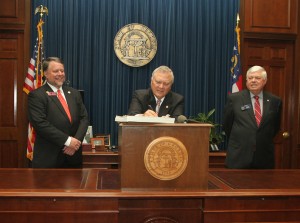 In just four weeks, Georgians will begin voting to elect our next governor. We are writing this letter to make sure every voter understands what is at stake in this election.

As chairmen of the House and Senate committees that, in conjunction with the Governor, craft the state’s annual budget, we are in positions to know better than most who Nathan Deal is and what a difference he has made the past four years.

Unlike some of his predecessors, Gov. Deal is not the kind of person who likes to brag. We respect him for that. But we want to share what we have seen and what we know.

This is the real story: Nathan Deal has governed so adeptly on so many fronts that Georgia not only has emerged intact from the Great Recession, but it also is poised for long-term prosperity.

In three separate rankings by industry analysts, Georgia in 2013 and 2014 has been recognized as the No. 1 place in America for companies to do business.

These national rankings are stunning in light of the recession’s devastating impact on Georgia’s economy just before Nathan Deal became governor.

And let’s be clear: A turnaround this dramatic and this fast doesn’t “just happen.”  We firmly believe that our state would not be where it is today without Nathan Deal’s leadership.

One of this governor’s distinguishing traits is his willingness to listen. His door is open to all of us, even to those who disagree with him. He listens to our ideas, and he often incorporates them into his statewide proposals. The payoff of this unusual level of cooperation in the Governor’s office is that Georgia wins.

How has Gov. Deal, with the House and the Senate, managed to move Georgia forward?

*        First, he cut spending. Some of the cuts were severe. They were not always popular. But they were the right things to do. Because Georgia lived within its means, this was one of the few states never once at risk of losing its AAA credit rating from 2011-2014.

*        He also cut taxes – erasing the “marriage penalty” from our tax code, eliminating the sales tax on energy used in manufacturing, and replacing the “birthday” tax on motor vehicles with a title/tag fee paid up front at purchase.

*        He safeguarded the future operation of the state government by rebuilding the “rainy day” fund for the government. And he safeguarded the HOPE scholarship program and rebuilt its reserves. Georgia’s cash reserves are approaching $1 billion due to his stewardship.

* He invested in the education of our children, who are our future and our state’s future workforce. Each and every year of Gov. Deal’s first term, the state appropriations for K-12 programs increased. This year’s $7.9 billion in funding for schools approaches the highest funding level ever.

* Finally and most importantly in terms of Georgia’s future, Gov. Deal put his laser-sharp focus on economic development. He also traveled internationally to help Georgia compete and in four years has welcomed scores of new companies to this state. The governor also made workforce training a priority. This state is offering some of its new corporate arrivals company-specific, workforce training.

During Gov. Deal’s first term, 294,000 new jobs have been added to the state’s economy. In the next few years, the new companies investing billions of dollars in Georgia will hire thousands more. They also are diversifying our economy so that a future downturn won’t be as devastating as the last one was to our state.

Nathan Deal has distinguished himself as our governor. The question to be answered Nov. 4 is whether Georgia will continue moving forward with his direction.

We urge you to go to the polls and give our governor the support he has earned. Let’s decide Georgia’s future.