The Mayflower left Plymouth, England, for the New World on September 16, 1620. Thirty-five of 102 passengers were members of the English Separatist Church seeking religious freedom from the Church of England. Originally aiming to reach Virginia, Mayflower eventually landed at Cape Cod, Massachusetts.

A single pistol shot on September 16, 1920 opened former Cherokee land in Oklahoma to white settlers in a “land run” to claim property.

The original stimulus act was announced to bring $70 million in federal money to Georgia to build roads and public buildings on September 16, 1933.

On September 16, 1940, President Franklin D. Roosevelt signed the Selective Service and Training Act requiring males 26-35 years of age to register for the draft.

R.E.M. and Gregg Allman were among the inductees into the Georgia Music Hall of Fame on September 16, 2006.

President Barack Obama is scheduled to arrive in Atlanta at 1:55 PM today. Here’s his schedule:

President Obama will announce that 3,000 United States military personnel will be assigned to help fight the Ebola outbreak in West Africa.

[Administration] officials, speaking on the condition of anonymity to discuss the plans ahead of Obama’s announcement, said the cost of the effort would come from $500 million in overseas contingency operations, such as the war in Afghanistan, that the Pentagon already has asked Congress to redirect to carry out humanitarian efforts in Iraq and in West Africa.

The officials said it would take about two weeks to get U.S. forces on the ground.

Traffic will be affected in the area around Emory University. Thanks, Obama!

The CDC security team has notified us that the entire CDC/Clifton Corridor will be shut down at 3:00pm for 30 minutes to one hour and again at 5:00pm. When the corridor is shut down no one will be allowed to enter or leave the area. 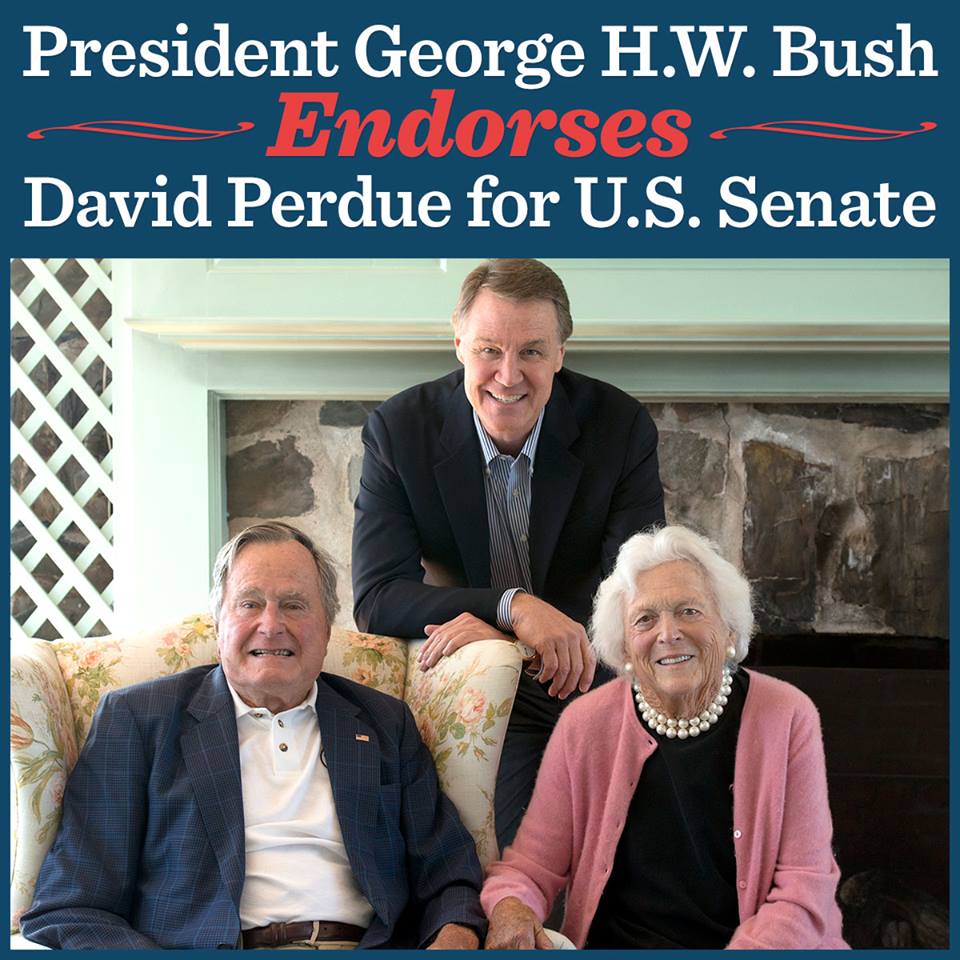 David Perdue said, “President George H.W. Bush is a steadfast leader for the conservative values that are needed to move Georgia and our country forward. I am truly humbled and honored to have his confidence and support in this critical election. President Bush understands the urgency to getting our country back on track, and I remain committed to being a problem solver in Washington.”

President Bush said, “I am proud to endorse David Perdue in this critically important Senate race because I am genuinely worried about the direction in which our beloved country is heading – and I understand many Georgians share this deep concern. Getting our economy back on track is one of the many keys to getting America back on track, and David Perdue’s success in the private sector – meeting a payroll and dealing with regulations – gives him the kind of real-world experience that Washington, DC is sorely lacking today. But just as important, I have lost any confidence in the current Senate leadership, and believe David Perdue will be an independent voice for Georgia while working for positive solutions to our toughest challenges. Barbara and I commend him to every Georgian voter who cares about America’s future.”

No word on whether Perdue will up his sock game after meeting with President Bush.

I’ve said that I like the RealClearPolitics average as a way of tracking the polls, over holding my breath everytime a new poll is announced, and then running around in a tizzy after the new poll upends expectations.

For a status check of how the races for Senate and Governor are going, and whether to plan some time off after the November 4 election, let’s look at how 2014 stacks up so far against some previous races.

Currently, the RCP average shows Governor Nathan Deal at 44.5% to Democrat Jason Carter at 42.3% for a net Deal +2.2 points.

So, two conclusions I take from the actual numbers, not from my expectations of where Gov. Deal “should” be. Governor Deal is in the same range today that he was at this point four years ago when he ended up with a nearly-ten point victory. Democrat Jason Carter is showing greater strength than former Gov. Barnes in 2010.

As an additional point of comparison, Huffington Post runs a similar aggregate model that shows Gov. Deal leading with 48.3% to 46.0% for Democrat Jason Carter.

In fact, with African-Americans being boosted by 5-7 points in the polling since 2010, I’d expect Carter to be running stronger.

The second point I derive from the historical data is that the idea that a winning campaign should be at or above 50% in September is bunk.

The 2010 Senate race ended in a blowout by Sen. Johnny Isakson over former Georgia Labor Commissioner Michael Thurmond (D) with Isakson taking it 58.1% to 39.2%, an 18.9 point victory. More interesting to me, in light of a lot of chatter about whether we’ll see runoffs this year is the 2008 Senate race between Saxby Chambliss (R) and Jim Martin (D), which actually did go into overtime with Chambliss taking 49.8% in November 2008 to 46.8% for Jim Martin.

We’re going to disregard Strategic Vision’s reported polling for 2008 and say that in September 2008, Saxby Chambliss was running in the range of 45-53% with an average of about 48.5% and Martin between 36-44% and an average of 41.75%. A Research2000 poll in September 2010 showed African-Americans composing 27% of the electorate while one SurveyUSA poll showed 26% and a second by the same company assumed 25% African-Americans.

Comparing 2008 numbers in the Senate race in a year in which Barack Obama led the Democratic ticket and the Georgia Senate race was highly-contested may be a good analogy for this year, when Georgia Democrats are using the Obama voter identification and turnout tools to try to boost Democratic turnout, and makes a better case to plan for a runoff than the race for Governor.