On September 15, 1831, Dr. Samuel Worcester and Dr. Elizur Butler – missionaries – were tried in a Lawrenceville courtroom for living as white people among the Cherokee and refusing to take an oath of loyalty to Georgia, convicted and sentenced to hard labor. Some historians refer to this case, which went as high as the United States Supreme Court on appeal, as the beginning of the events that led to the forced removal of the Cherokee people from Georgia on the “Trail of Tears.”

On September 15, 1904, Wilbur Wright made the first in-flight turn in an airplane.

Early on the morning of September 15, 1963, a bomb exploded in the 16th Street Baptist Church in Birmingham, Alabama, killing four young girls.

On September 15, 1996, the Texas Rangers retired #34 in honor of the most dominant pitcher in professional baseball history, Nolan Ryan.

My apologies that we will not be bringing you the normally-scheduled programming this morning. We are on the road attending to a family medical emergency and will return to our normal programming tomorrow, Tuesday, September 16th.

Polls, what are they good for?

A number of new polls were released late last week, and we’re working on making sense of them. Here’s the analogy I would use for now. Say you hired five different carpenters to measure the size of your front door and they came up with different figures? A more apt analogy would be if you asked five different mechanics to measure the front door of your car as it was moving along the road.

A public opinion survey, or poll, is nothing more than an attempt to measure a complex system. It involves making estimates of what certain parameters, like African-American turnout, or regional variations between Metro Atlanta and South Georgia, as well as actually phoning a bunch of people who may or may not vote and asking them a series of questions.

The biggest problem with polls is that they attempt to present a single set of numbers to describe how the election is shaping up today, and people then try to draw conclusions about what will happen weeks from now on that basis.

WSB-TV’s Lori Geary presents several sets of numbers and discusses some of the issues that go into the election. 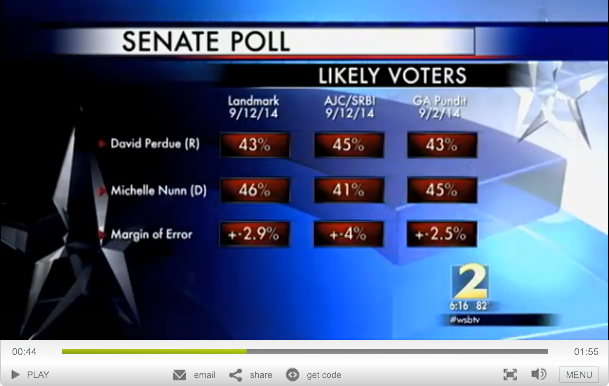 Ultimately, a poll, especially weeks out, is more like your child’s progress report than a final grade or a prediction of what will happen in the future. We’re looking for trends and the direction the poll is going, more than a single answer to the question, “who will win?”

So from the polls, I’d say it’s a very close race that will be decided in the final weeks as the real money and effort comes online. Beat that for making a prediction that sounds like it has substance but which provides no actual information.

Here’s what I usually look at in terms of public polling – the RealClearPolitics average is one of several similar models I track. 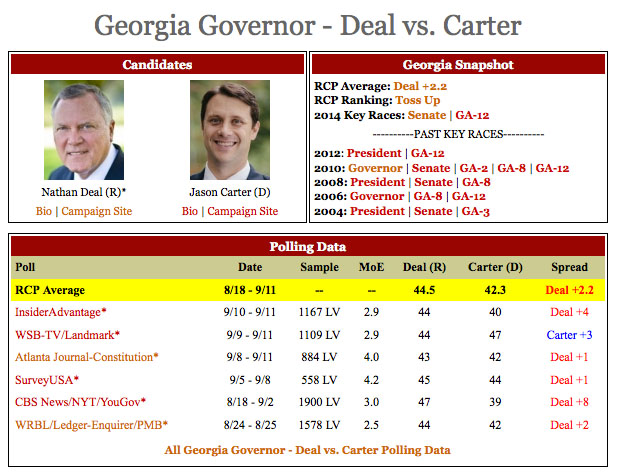 It’s the equivalent of taking the five carpenters’ measurements and averaging them. Generally speaking it’s a better measure than any single poll is likely to be.

I’m going to end on that note, as we have to go visit at the hospital again, but in closing I’ll say this: it is clear that the organizations that are polling the race have started to watch the local pollsters for information and predictions on African-American turnout. There’s one local pollster who has gone off the rails and should be disregarded. But if it weren’t for GaPundit raising the issue of what percentage African-American turnout will compose in November, none of the news organizations would be talking about it and the outside-Georgia pollsters would still be ignoring the question.