French troops arrived near Savannah to prepare for a siege against British forces there on September 12, 1779.

On September 13, 1788, the Confederation Congress voted to implement the Constitution and authorized states to elect Senators and Representatives and called the first Presidential election, with selection of presidential electors in the states to be held on January 7, 1789, and February 4, 1789 as the day electors would cast their ballots.

Francis Scott Key composed the lyrics to “The Star Spangled Banner” on September 14, 1814.

On September 14, 1885, Georgia Governor Henry McDaniel signed legislation granting up to 200 acres in Fulton and DeKalb Counties to the federal government to be used in the constuction of Fort McPherson, which was named after Union Maj. Gen. James McPherson, who was killed in the Battle of Atlanta in 1864. 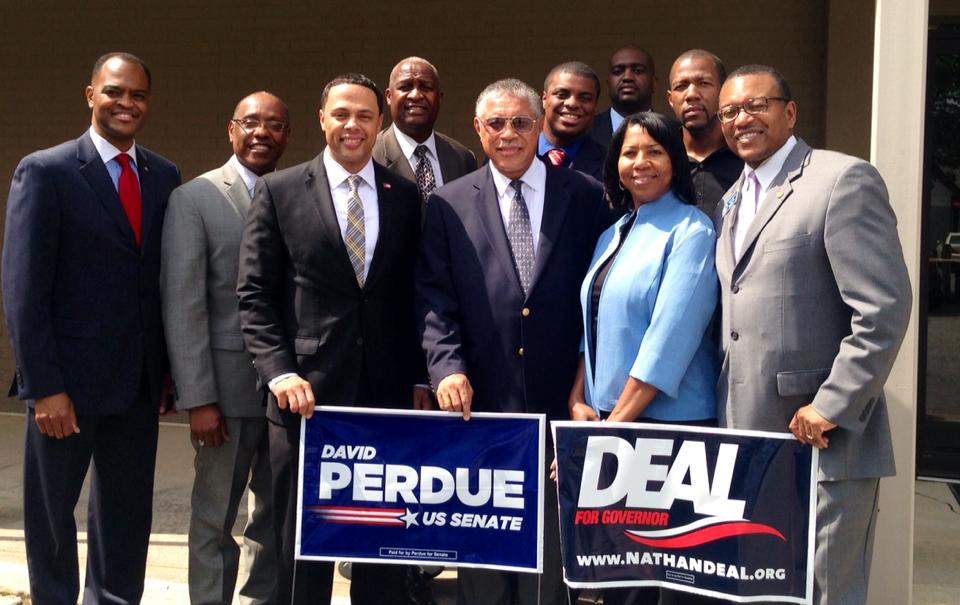 I don’t think there’s anything inherently wrong with Sunday voting. Near the area in which I live in DeKalb, a large Orthodox Jewish community doesn’t use cars on Saturday and I’m not certain but strongly suspect that voting would be proscribed. Opening Sunday voting hours might help them vote more conveniently as well as being more convenient for others who observe no religious proscriptions on non-commercial sabbath activities.

In DeKalb County, however, we are limited to one Sunday location that appears to be selected for the partisanship of voters in surrounding precincts rather than any other criteria. From my home, it’s a 24-minute drive to the Gallery at South DeKalb Mall, the county’s only Sunday voting location; by MARTA, the trip takes one hour and sixteen minutes, according to Google maps. That voting location does no good for the large Hispanic and Asian communities along Buford Highway. I’d be interested to see the correspondence among DeKalb bureaucrats on Sunday voting to see what criteria were used.

But I see no reason why Gwinnett, Cobb, Cherokee, Forsyth, Fayette, Paulding, and even Walton Counties shouldn’t open Sunday voting options for their voters. If it’s a good option to make voting more convenient for citizens, let’s do everything we can to make it widely available.

If there’s any remaining doubt that Democrats are systematically working to raise the issue of race in this year’s elections, it was dispelled when two elected Democratic officials went on the Al Sharpton show on MSNBC yesterday. 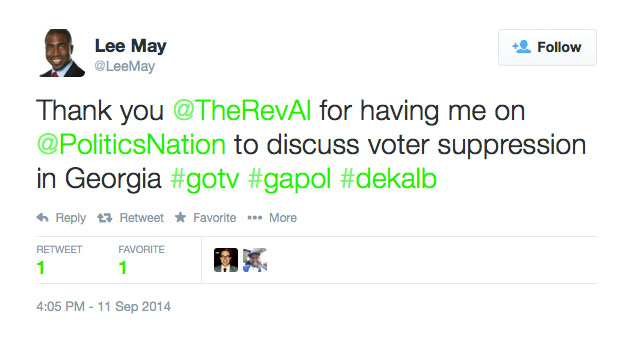 May is the interim CEO in DeKalb County who first announced the partisan Sunday voting scheme. He’s also a member of Democratic candidate for Governor Jason Carter’s Campaign Committee. 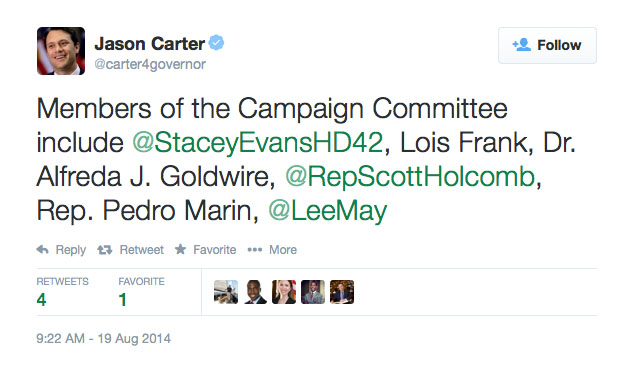 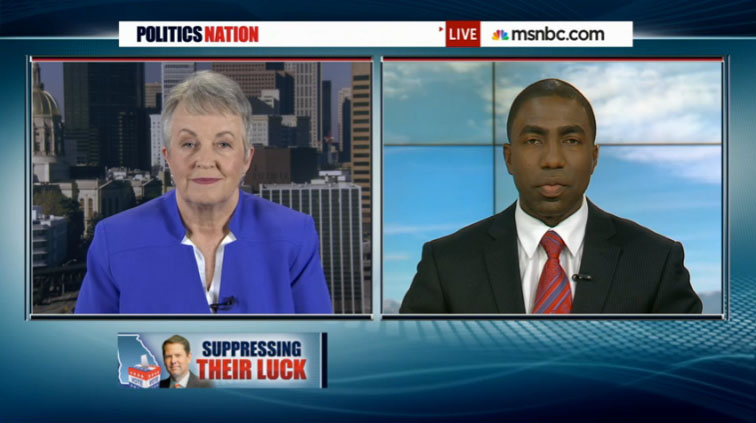 I will give Rev. Sharpton credit for two things: first, he used more of Brian Kemp’s quote than Democratic group Better Georgia, about which we have more below; second, he correctly prounced Senator Fran Millar’s surname as rhyming with “Miller.”

But to also be fair to Sen. Millar, we should point out that most of the quote being attributed to him about the South DeKalb voting location being “dominated by African-American voters” should be correctly attributed to Jim Galloway of the Atlanta Journal-Constitution, whose words Millar was quoting. Here’s the full quote in Sen. Millar’s statement:

Per Jim Galloway of the AJC, this location is dominated by African American shoppers and it is near several large African American mega churches such as New Birth Missionary Baptist. Galloway also points out the Democratic Party thinks this is a wonderful idea – what a surprise. I’m sure Michelle Nunn and Jason Carter are delighted with this blatantly partisan move in DeKalb.

Jim Galloway of the AJC Political Insider has a great piece that shows how Democratic front group Better Georgia has tried to manipulate the media into covering Brian Kemp’s statement this summer about voter registration efforts by providing audio that was edited to make it look like something it wasn’t.

This was the total content of the 19-second clip [edited and provide by Better Georgia]:

“In closing I just wanted to tell you, real quick, after we get through this runoff, you know the Democrats are working hard, and all these stories about them, you know, registering all these minority voters that are out there and others that are sitting on the sidelines, if they can do that, they can win these elections in November.”

The implication is that Kemp wanted these registration efforts stopped – hence the allegations of voter fraud against Stacey Abrams and the New Georgia Project.

We warned you to be skeptical, because of the absence of any context in the audio file.

These are the words that flowed from the secretary of state’s mouth after Better Georgia cut him off:

“Well, we’ve got to do the exact same thing. I would encourage all of you – if you have an Android or Apple device, download that app, and make it your goal to register one new Republican voter….”

Kemp was very clear: Democratic voter registration efforts should be matched, not stopped.

Yes, the secretary of state raised the specter of ACORN, and, yes, the speech was a partisan one. But Kemp wasn’t saying what Better Georgia wanted us to think he was saying.

Turnout important outside the Perimeter too

The Hill has an article in which they speak extensively with Keith MacCants of Peanut Politics about the importance of rural turnout for the Georgia Senate election in November.

While Democrats point to the growing numbers of African-American and Latino voters as a sign of the state’s purple-trending demographics, the fact is that a significant infusion of rural voters in central and south Georgia will have to cast a ballot for Nunn if she is to defeat businessman David Perdue for the seat held by outgoing Republican Sen. Saxby Chambliss.

Keith McCants of tiny Oglethorpe, Ga. is perhaps his state’s most knowledgeable expert on rural politics, and he has a lot to say about what Nunn needs to do to be competitive over the final weeks in the rural counties.

McCants, who runs the respected Peanut Politics blog, said Nunn has two tasks in wooing rural voters. First, she must motivate “Obamacrats,” the rural black voters in the 1st, 2nd and 8th Congressional Districts who don’t come out to midterm elections like they do when Obama’s name is on the ballot. Second, McCants says Nunn needs independents and voters 55 and older to break her way. “Everyone assumes if you’re white and rural, you’re a Republican,” he laments.

McCants said he winced when Nunn’s campaign memo leaked out early this year, because the policy areas of agriculture, trade, infrastructure and rural issues were ranked at the very bottom of Nunn’s list. “She needs to talk about issues that resonate with rural areas,” McCants said, adding that Nunn should speak of her Methodist faith much more. “That’s something Democrats haven’t done a lot.”

“Nunn and Democrats in general have to over-perform in voter registration and expand the voting base in order to win in November. She is going to have to invest time outside of her big county strategy and into smaller counties such as Crisp, Tift, Ben Hill, Laurens, Tattnall, Troup counties, for example, in order to compensate for a low-expected turnout,” said McCants.

BloombergView has an article on the background and history of runoff elections in Georgia and what it means for the Senate race this year.

Consider this scenario: A new Congress convenes next Jan. 5, and Republicans have a one-seat majority in the U.S. Senate. The next day, however, the Republican advantage is wiped out. How?

Georgia. State law there requires a run-off if no candidate receives 50 percent of the vote on Nov. 4. The Senate race, for a seat held by retiring Republican Saxby Chambliss, is between Democrat Michelle Nunn and Republican David Perdue. Polls show a tight race. In addition to Nunn and Perdue, the ballot will feature Libertarian candidate Amanda Swafford, so the top vote-getter could end up shy of 50 percent.

Georgia is considered the Democrats’ best chance to win a seat currently held by a Republican. A victory there would mitigate Democratic losses sure to accrue elsewhere on the Senate map. If the Republicans win a net of six seats, they will have a Senate majority next year.

Senate run-offs are rare, but not unknown, in Georgia. In 1992 incumbent Democratic Senator Wyche Fowler fell just short of a majority on Election Day in November. The run-off was held three weeks later. Fowler was defeated by Republican Paul Coverdell.

I think I can make the case convincingly that General Election runoffs in Georgia strongly favor the Republican candidates and that a scenario in which a long and grueling winter runoff favors the Democratic candidate is within the realm of fantasy fiction.

Not just the 1992 Paul Coverdell victory over incumbent Wyche Fowler, but the 2008 Runoff  in which Saxby Chambliss scored a nearly-15 point win to retain his seat and several Public Service Commission statewide runoffs going back to 1992, when Bobby Baker became the first Republican elected to statewide Constitutional office in Georgia since Reconstruction.

GATHER AT THE DeKalb GOP HQ to make phone calls for VICTORY. HELP US FIRE HARRY …