Cry Out America will hold a prayer event at the Georgia State Capitol on Thursday, September 11, 2014 from 11 AM to 1 PM inside the Capitol near the South Steps.

In a memo sent to county elections officials, Secretary of State Brian Kemp said in recent weeks his office has “received numerous complaints about voter applications submitted by the New Georgia Project.”

“We’re just not going to put up with fraud. I mean, we have zero tolerance for that in Georgia so we’ve opened an investigation and served some subpoenas,” Kemp told Channel 2 political reporter Lori Geary.  “At the end of the day this is not going to be about politics. This is about potential fraud which we think happened.”

“The abrupt release of this subpoena saddens me as I know the efforts of this organization have been done with the mission of increasing voter registration and engagement in the most disadvantaged and underserved groups in the state. The New Georgia Project team has worked directly with the Secretary of State’s Office every step of the way, seeking to address any concerns raised by their office or by the counties, to share information and be transparent on our work.”

“The abrupt release of this subpoena saddens me as I know the efforts of this organization have been done with the mission of increasing voter registration and engagement in the most disadvantaged and underserved groups in the state. The New Georgia Project team has worked directly with the Secretary of State’s Office every step of the way, seeking to address any concerns raised by their office or by the counties, to share information and be transparent on our work.”

How ironic! Michele Obama comes to town and Chicago politics comes to DeKalb.

For the third time in recent months Governor Deal appointee Interim CEO Lee May has disappointed those of us that hoped he could help bring the county together.

Now we are to have Sunday voting at South DeKalb Mall just prior to the election. Per Jim Galloway of the AJC, this location is dominated by African American shoppers and it is near several large African American mega churches such as New Birth Missionary Baptist. Galloway also points out the Democratic Party thinks this is a wonderful idea – what a surprise. I’m sure Michelle Nunn and Jason Carter are delighted with this blatantly partisan move in DeKalb.

Senator Millar also spoke to WSB-TV about the issue:

“There are a lot of statewide candidates on the ballot from DeKalb County. So, one and one is still two. I think this is being done for partisan reasons,” said Republican State Sen. Fran Millar, of Dunwoody.

He has spoken out against the move, calling it a loophole since no vote needed to be taken to add the extra voting day and location.

But it’s the words that he used to speak out that has some claiming it’s racially motivated.

This is not a partisan issue, as Mr. Millar’s statement would suggest. It is certainly not a racial issue. And that he would argue otherwise is shameful and disturbing.

Fran Millar must apologize immediately for this insult to the African American community and to the fine people of Georgia for suggesting the worst about who we are today.

National liberals outside Georgia are already screaming at Millar.

Yesterday on Georgia Morning News with Tim Bryant, former State Ethics Commission Executive Secretary Rick Thompson discussed what he calls the major issue with the Commission currently. We’ll post audio if, and when, it becomes available, but for now, we’ll work from memory.

Thompson said that most of the problems at the Ethics Commission stem from a misunderstanding of its role: the Georgia Government Transparency and Campaign Finance Commission does not enforce ethics laws, it provides a way of disclosing required information on candidates personal finances and campaign finances. All the Commission does is operate a disclosure system and it’s primary enforcement authority is limited to powers to fine individuals and organizations that do not properly file required documents.

Meanwhile, Holly LaBerge was fired as Executive Secretary of the Commission by unanimous Commissioners after Fulton County Superior Court Judge Ural Glanville said she was “dishonest and non-transparent” in her response to the whistleblower lawsuit by her predecessor. LaBerge will appeal Glanville’s $10,000 fine against her.

Former DeKalb County Board of Education member Nancy Jester was the first to qualify for DeKalb Commission District 1, taking her parents to accompany her. 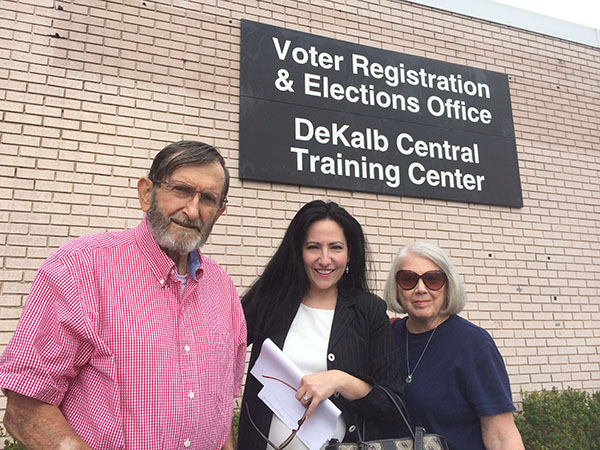 Yesterday, the DeKalb County Voter Registration and Elections office told me on the telephone that Larry Danese, who ran against Elaine Boyer in 2012 and earlier as a Democrat and ran for Brookhaven Mayor where he took 10 percent of the vote, qualified, but Joe Earle of the Reporter Newspapers wrote that Jester was the only candidate to file. We’ll follow up and bring you more after the close of qualifying today.

The Joint Study Committee on Prescription of Medical Cannabis for Serious Medical Conditions will hold its next meeting on Wednesday, September 10, 2014 from 1 p.m. to 4 p.m. at Mercer University in Macon.

At this meeting, the committee will hear testimony from parents with children who have seizure disorders, mitochondrial disease and autism, as well as citizens with post-traumatic stress disorder, chronic pain, multiple sclerosis and other diagnoses who desire medical cannabis to treat these illnesses.

Katie Crosby is a 26-year old Macon woman who suffers from chronic pain and is interested in the possibility of Medical Cannabis legislation including chronic pain, from which she has suffered for a number of years, though she has not experimented with it due to its use being illegal.

Come Wednesday, the 25-year-old will leave her darkened home for the spotlight of a legislative panel at the center of Georgia’s medical marijuana debate, where she will try to open people’s eyes.

Sometimes in the public discourse over what medicines the suffering should and shouldn’t be allowed to take, something gets overlooked.

We can watch an athlete shred a knee or snap an ankle and wince at the bone-popping injury. We can see that, yes, that had to hurt.

But chronic pain, pain that lingers for months or years, can be difficult to grasp for those not in its throes. It renders about 20 percent of American adults “substantially impaired,” according to a recent article in the Milwaukee Journal Sentinel. Between 10 and 15 percent face “substantial work disability.”

Amid the controversy over legalizing cannabis oil or other types of medical marijuana, some worry that Georgia lawmakers, if they OK its use, won’t go far enough.

They fear that legislators will only allow it for treating seizures and the terminally ill, leaving out sufferers of other maladies who might find relief in the hemp extract.

State Rep. Allen Peake, R-Macon, has led the charge to legalize the cannabis-derived medicine to help those with severe disorders. He invited Crosby to testify at Wednesday’s legislative-study-committee hearing at Mercer University, one of a handful being staged across Georgia.

It is a longshot that chronic pain sufferers will be included in any early law that grants patients access to medical cannabis, Peake said. “(But) can it be done? Absolutely.”

That said, some legislators might deem broader approval for use too slippery a political slope.

Even so, Peake has told Crosby, “You could be the one to change their minds.”