Advertising in the rights of way of state roads and placing signs on private property without the owner’s approval were prohibited in the first Georgia law regulating outdoor advertising, which was signed by Governor Richard Russell on August 27, 1931. Over the years, both practices would become enshrined in Peach State political strategy.

Former Georgia Governor Lester Maddox was nominated for President on the American Independent Party ticket on August 27, 1976, making the race probably the only one to ever feature two former Georgia governors. During the campaign, Maddox described Jimmy Carter as “the most dishonest man I ever met.”

On August 27, 1982, Oakland Athletics outfielder Rickey Henderson broke the record for stolen bases in a season, nabbing number 119 against the Milwaukee Brewers.

On August 27, 2008, Barack Obama became the Presidential nominee of the Democratic Party, the first African-American nominee of a major United States political party.

A day after she resigned from the DeKalb County Commission, federal wire fraud and conspiracy to commit mail fraud charges were filed against Elaine Boyer.

The information charges Boyer with participating since at least September 2009 in a scheme to defraud the county by submitting false invoices for consulting services that were supposedly performed by an unnamed adviser whom Boyer had hired to assist her with her public duties.

According to the information, for at least two years invoices were submitted to Boyer’s office for the adviser’s consulting services, but no such services were performed. Boyer used the invoices to authorize payments—and mail 35 checks totaling more than $78,000—to the adviser who, the information said, funneled about 75 percent of the funds, an estimated $58,000, into Boyer’s personal bank account.

Boyer then used the money to pay personal expenses, including purchases at hotels and high-end department stores, the information said.

The criminal information also charges Boyer with using a county-issued Visa purchasing card, which was intended for county-related purchases, to make more than 50 personal purchases totaling more than $15,000 that included airline tickets and hotel rooms for personal travel for herself and her family.

The Atlanta Journal-Constitution reports that the consultant in questions is likely Marion Rooks Boynton.

[A]n Atlanta Journal-Constitution investigation that began months ago found that only one consultant received those kinds of payments from Boyer.

It’s Marion Rooks Boynton, a 72-year-old evangelist who ran unsuccessfully for DeKalb County offices 30 years ago. In recent weeks, the AJC had been asking Boyer for proof of the work Boynton had performed.

She could produce none.

Tuesday afternoon, Boyer told a federal magistrate judge she will plead guilty to a mail fraud charge in connection with that scheme. Boynton has not been charged.

Boyer also plans to plead guilty to another scheme first revealed in the AJC in March: using her county purchasing card to pay for personal expenses.

It is my personal hope that Nancy Jester will run for DeKalb County Commission to fill the seat vacated when Boyer resigned. During her service on the DeKalb County Board of Education, Nancy Jester uncovered millions of dollars in fraud, and sacrificed her political career on the School Board to bring the fraud to light. DeKalb County deserves an honest, principled public servant, not another political hack with ties to Elaine Boyer.

Yesterday, I wrote about a difference between the recent poll released by Landmark Communications, and those by other polling firms.

The Landmark poll projects a 29% ‘black vote.’  Frankly, anywhere from 28% to 30% would be reasonable, but we believe 26% is too low and has caused other polls to incorrectly display higher support for Republican candidates at this stage of the election.

The Republican National Committee apparently wrote to a member of the RNC from Georgia:

Having said that the poll you site does have African American turnout #’s at 29%. That is about 4 pts higher than the historic average but I don’t know that it is impossible.

So, there seems to be a difference in opinion on the historic figures for African-American turnout as a percentage of all voters. The difference between the RNC’s 2010 figure or 25% and Landmark’s 2010 figure of 28.5% is very significant in this setting.

It might be correct that an historic average of the percentage of Georgia voters in a General Election who are African-American is 25%, but that’s the wrong number to use as a predictor for 2012 turnout. The clear trend among the Georgia electorate is rising African-American turnout. Additionally, as Mark Rountree of Landmark Communications pointed out,

Since 2010, there have been 925,000 newly registered voters (net) in Georgia. Based on voting behavior by all demographic groups, this registration has added approximately 200,000 net new behaviorally Democratic voters to Georgia’s voting rolls. This means approximately 50,000 net registered voters added each year to the voting rolls in Georgia since the 2010 election.

Here are three fundamental facts to understand when you’re looking at polling:

1.) the nature of polling is such that you can be wrong in the weighting and still have numbers that accurately represent the state of the electorate

3.) a single poll, even if absolutely correct, is a reflection of a point in time, and not a predictor of the future. 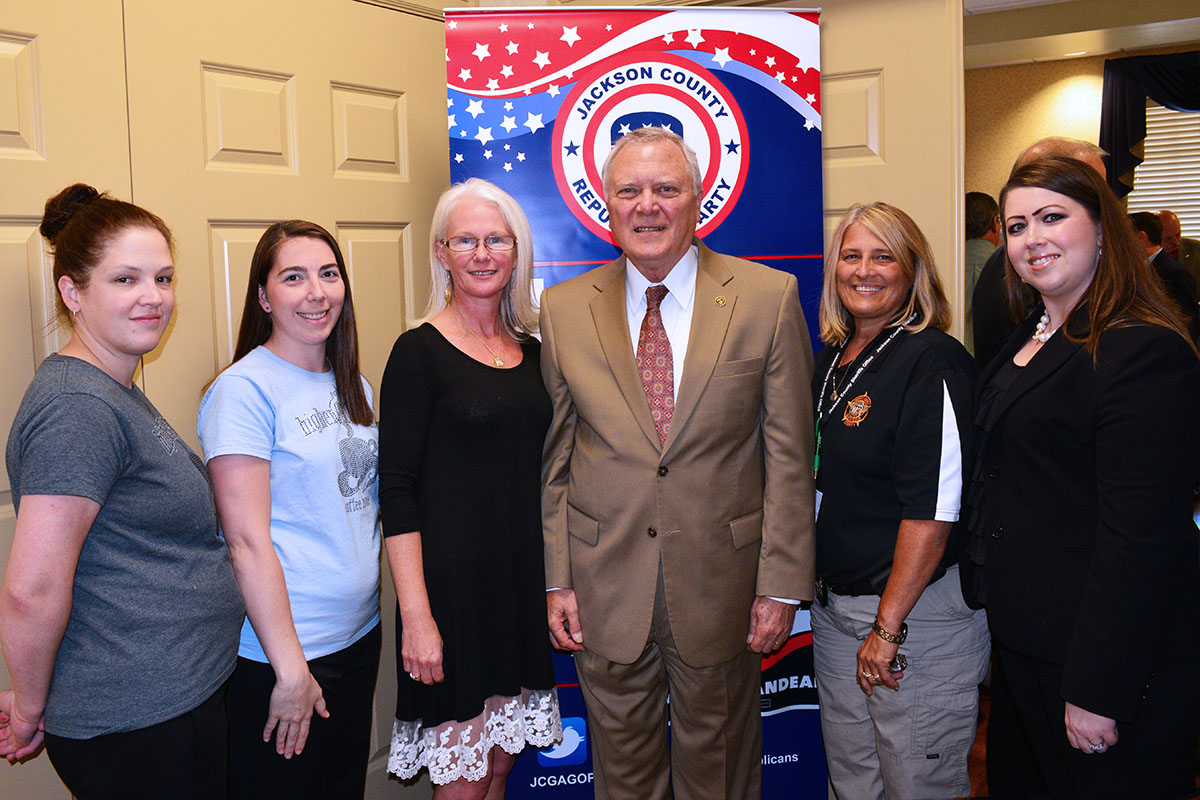 Yesterday, Governor Nathan Deal spoke to a lunch held by the Jackson County Republican Party in Braselton, Georgia. Lunch was catered by Higher Grounds Coffee House, a very nice shop that I’ll visit again when in Braselton. Second from the right, next to Gov. Deal is Jackson County Sheriff Janis Mangum.

I’ll listen to the recording later today and see if I can pull out a couple segments to transcribe, but here’s what I took away from what Governor Deal said:

Voter turnout is absolutely critical, Republican voters must go to the polls….I’m afraid [changes in the primary schedule] may have desensitized people in this election cycle to the point where they just stay home, and we can’t afford to have that happen. Our base needs to turn out…. I would urge you to try and make sure that your family, and anybody you have any kind of contact or influence with, please stress to them the importance of this election.

Now this is a precursor to [2016], where we have a Presidential election. So, if Georgia shows any signs of vulnerability, then we are going to be deluged as a state that can no longer be counted on in the Republican column, and that has rather devastating effects for us, so we need to make sure that we do get the [voter] turnout this time.

Judge Adamson ordered the defendants to pay $12,000 in penalties, the highest amount possible under the law. Defendants have also been ordered to pay attorney’s fees in an amount to be determined at a later hearing.

“This ruling is a major victory for government transparency,” said Olens. “Georgians deserve a government that operates openly and honestly. The essence of our democracy is that elected officials are held accountable to the citizens and that citizens are allowed to exercise their rights granted by the First Amendment.”

“My office takes very seriously our responsibility to enforce the Open Meetings and Open Records Acts. The actions by the mayor in this circumstance were egregious, and it is essential that he be held responsible for his actions.”

Nydia Tisdale, who was ordered to stop video recording a public meeting was also at the center of the dispute this past weekend at an event held on private property, where she was arrested and charged with criminal trespass and obstruction.

Here’s the lesson for folks in politics: video recording devices are everywhere, and if you’re holding a public meeting at which candidates or elected officials are speaking, they will be recorded. In fact, the whole incident at Dawson County was recorded, and at least audio and photos are available. See, there’s this thing called an iPhone that combines a video recorder, audio recorder and camera.

If the candidates speaking this week had simply ignored Ms. Tisdale, there would be no issue. Instead, some well-meaning folks handed Gov. Deal’s opponent, Jason Carter, yet another stick with which to scourge our Republican Governor over something he and his campaign had nothing to do with.

The Democratic Party of Georgia, through spokesman Michael Smith, sent us word last night that they, too have seized on the issue. Smith coupled the reporter’s ouster with the GOP’s all-white ticket to try to make the case that Republicans are “rejecting huge swaths of the public.”

Said Smith: “They continue to alienate women, people of color, the LGBT community, and immigrants with hostile rhetoric and policies. Just this year, the Georgia Republican Party overwhelmingly rejected women and people of color on their Primary ballot. And now—in an apparent attempt to conceal what they say behind closed doors—it seems the GA GOP is purging itself of the press as well.”

This is nothing less than a political amateur hour blunder.

Pro-tip: the media can’t hold a circus if you don’t act like a clown.

Here’s a video shot a couple weeks ago by the lady who was forcibly removed from the Dawson County event. It’s well done and embarrasses no one. In fact, if I were one of the candidates in the video, I’d be grateful, and I’d be forwarding it to my friends and supporters to share with their friends and family.

Best of all, nobody embarrassed themselves or their fellow Republicans.

Professionals on-stage do not get flustered or distracted by video recordings, or even hecklers. They continue with their remarks, and for goodness sake, they don’t embarrass their Governor with whom they share a ticket in November.

Computer Programming as a foreign language

Earlier this week, Governor Deal announced that he is asking the State Board of Education to allow computer programming classes to satisfy part of the requirements for a high school diploma.

“Students need to acquire the 21st century skills necessary to thrive in the modern workforce,” Deal said. “Computing is currently one of the fastest growing occupations in the country with average salaries nearly twice the national rate. In fact, more than half of the projected job growth in the STEM fields will be in computing occupations. We must begin training our young people in these areas prior to their post-secondary education so they are prepared to fill these high-wage, in-demand positions.”

“This change will support our STEM efforts — science, technology, engineering and mathematics,” said University System of Georgia Chancellor Hank Huckaby. “It is a recognition of the evolving dynamics of our increasingly technologically dependent world.”

“If Georgia is to maintain a world-class workforce, then we must ensure that our students can understand and apply sophisticated technology,” said Technical College System of Georgia Commissioner Ron Jackson. “I applaud Governor Deal for this change that will improve the education of students and build a better future for Georgia.”

Currently, Georgia allows Advanced Placement Computer Science to satisfy the fourth and final science credit in high school. Only 18 percent of Georgia high schools offer this class and less than one percent of students took the course in 2013. Other coding courses can count only as elective credit and access to these courses is limited.

“I am working to keep Georgia the No. 1 place in the nation for business and we must have a strong education system that responds to the needs of companies across our state in order to do so,” Deal said. “Computer science should no longer be just a high school elective. With the help of strong partners like Georgia Tech, we can develop these valuable courses and better prepare our students for college and the workforce.”