Wright had been the only colonial governor and Georgia the only colony to successfully implement the Stamp Act in 1765. As revolutionary fervor grew elsewhere in the colonies, Georgia remained the most loyal colony, declining to send delegates to the Continental Congress in 1774.

On July 11, 1804, Aaron Burr shot Alexander Hamilton in a duel in Weehawken, New Jersey. Burr was the sitting Vice President of the United States and Hamilton a former Secretary of the Treasury.

On July 11, 1877, a Constitutional Convention convened in the Kimball Opera House in Atlanta to replace the 1868 Reconstruction Constitution.

General Dwight D. Eisenhower was nominated for President by the Republican National Convention on July 11, 1952.

Washington & Lee University will take down replicas of Confederate flags that hang in Lee Chapel, where the recumbent statute of General Robert E. Lee stands.

Washington and Lee University in Lexington, Virginia, has agreed to remove Confederate flags from its Lee Chapel, responding to pressure from a group of black law school students. The chapel and the university bear the name of Confederate Army General Robert E. Lee, who became the university’s president after the Civil War.

The decision to remove the flags and to confront the University’s historic involvement with slavery was announced by Washington and Lee president, Kenneth Ruscio, who joins me now from Lexington. Welcome to the program.

MELISSA BLOCK: Now in terms of the demand for an official apology for the university’s role with slavery, in your statement, you say this was a regrettable chapter of our history that has to be confronted, but you also said that you wouldn’t apologize for the crucial role that Robert E. Lee played in shaping this institution. So not an official apology for the university’s connection with slavery itself, although you say it is regrettable.

You know, the question of Robert E. Lee is that he devoted five years of his life to the institution as president and made some very, very significant contributions during his time here. And as I had said in other contexts, Robert E. Lee was absolutely an imperfect individual living in imperfect times. And to understand the complexity, understanding the totality of a record of an individual, is clearly the first step that we have to take as a community. And I think that’s where I would head first.

It is ironic that it was President Robert E. Lee, after whose tenure at the University all subsequent presidents are numbered, who brought the School of Law into the University.

The Law School was not integrated into Washington and Lee University (then known as Washington College) until after the Civil War when Robert E. Lee was president of the university. In 1866, General Lee annexed the school, known at the time as the School of Law and Equity, to the college and appointed Judge Brockenbrough as the first Dean. In 1870, after Lee’s death, the School of Law and Equity was renamed as the Washington and Lee University School of Law, in line with the college’s name change in honor of General Lee.

For many years, historic and authentic Confederate battle flags were displayed in the Chapel.

The flags had been either captured by or surrendered to the Union Army during the Civil War and held until 1906, when the secretary of the U.S. Army ordered their return to the Confederate Memorial Literacy Society (CMLS), in Richmond, Va., which ran the Confederate Museum (later called the Museum of the Confederacy and now part of the American Civil War Museum), also in Richmond. The CMLS, in turn, agreed to loan eight of the flags to the UDC for display in Lee Chapel. Four additional flags came to the chapel from private donors for display and interpretation in the Lee Chapel Museum.

In 1963, A. Prescott Rowe, then the museum curator, observed that the flags were deteriorating. He wrote that “the natural inclination of most visitors to touch and feel the time-worn material necessitate their relocation to bronze wall holders for the sake of preservation.”

In 1993, the Museum of the Confederacy asked that the University return the flags because of their deteriorating condition, and the original flags were replaced by reproductions in 1995. 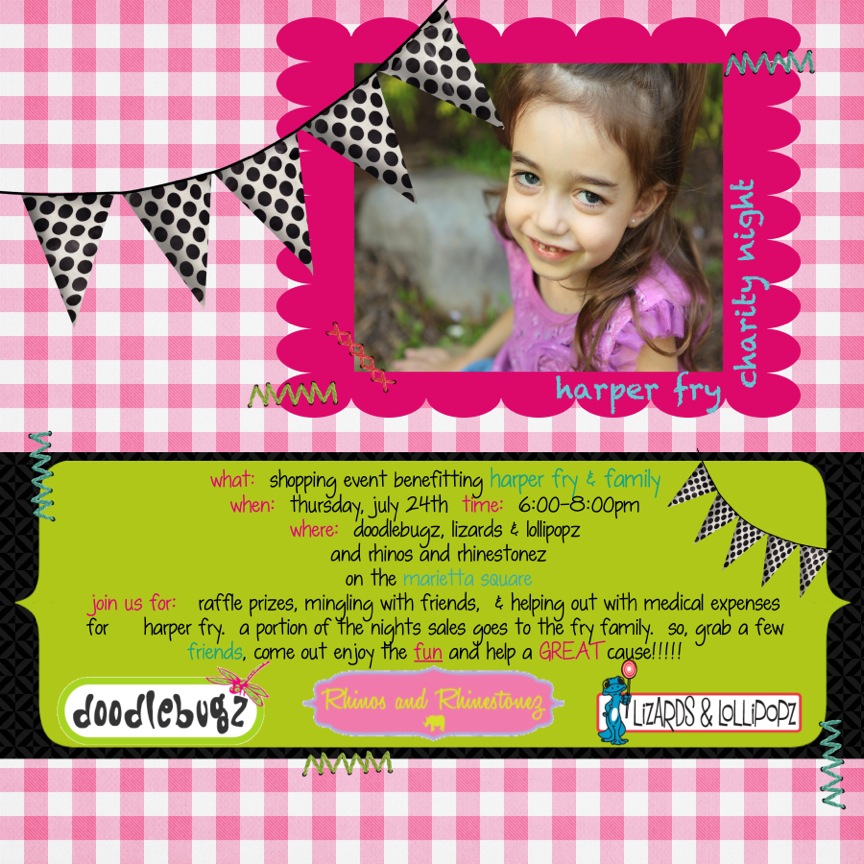 If you’re female and live in or near the Marietta Square, a Girls’ Night Out fundraiser is being held on July 24th by three shops on the Square. That little girl you see there has a rare, terminal genetic disease, and part of the proceeds will benefit her and her family as they seek the best treatment and highest quality of life for Harper, as well as giving Harper’s mother a night on the town with friends. If I were eligible to attend a Girls’ Night Out, I would totally be there.

“The Kingston campaign has played what might be called in football terms the old ‘prevent defense.’ An overly cautious approach, in other words,” said InsiderAdvantage CEO Matt Towery.

“It’s not working. Because both campaigns and the groups that support them have TV attack ads that look so much alike – grainy or unflattering still pictures of the opponent, with nasty allegations or questions as the narrative – the public is tuning them out,” said Towery.

“Kingston has dropped nearly 11 points since our last survey, and clearly Perdue has momentum on his side. To reverse this situation, the Kingston camp must do two things. First, they must revamp their ads in order to have more impact. Second and just as important, they must utilize the very same turnout system used by Karen Handel in the primary,” said Towery.

“Handel has endorsed Kingston, but the Kingston camp can’t assume that an endorsement announcement made weeks ago can translate into votes today. To date, one poorly produced Handel robocall has reportedly been made to potential voters. Handel’s get-out-the-vote effort was targeted and very effective for a campaign lacking funds to fight it out on TV. Kingston must target those same voters using Handel’s endorsement, and do so in the same in areas where his many other endorsements might make a difference,” he said.

The survey of 1,278 likely voters and voters who have voted early was conducted by phone and online July 7-9. It is weighted for age, race and gender. The “SuperPoll” has a margin of error of plus or minus 2.7% and a confidence level of 95%.

I’ve made suggestions to the Kingston campaign for their robocalls and how to leverage the great endorsements they have received, but have not even received a response.

Walter Jones of Morris News, writes about the poll and the Senate race:

David Perdue has effectively erased the lead Jack Kingston had enjoyed in the Republican Senate runoff, according to a survey released Thursday.

Perdue told about three-dozen supporters during a campaign stop in this Atlanta suburb that he’s feeling the momentum. The day before, Kingston greeted diners at the Varsity drive-in and also expressed confidence.

Perdue, a retired corporate executive and political newcomer, came in first in the May primary with Kingston second out of a seven-candidate field. But the candidates who finished third and fourth, Karen Handel and Phil Gingrey, have since endorsed Kingston as have a handful of his congressional colleagues and newspapers around the state.

Independent polls reported Kingston with a double-digit lead in the weeks following the primary, apparently benefiting from a fleeting “bump” from news of the endorsements while Perdue had no TV ads on the air. Perdue spent that time replenishing his campaign war chest and will report raising about $1 million and adding more of his own cash in figures to be reported late Thursday.

Kingston said Perdue is out of touch with voters, especially Republicans.

“Someone who is running for the U.S. Senate and has never voted in the Republican primary until his name is on the ballot, that takes chutzpah, if nothing else,” Kingston said.

So far, the price tag for the Senate campaign totals $11 million by Kingston and Perdue alone.From the Associated Press and Christina Cassidy.

Among the Republicans, Kingston began his campaign with a large cash advantage. He had about $2.3 million in his congressional campaign account that was transferred over for the Senate race. Perdue, who made millions overseeing companies including Dollar General and Reebok, has pumped $3.1 million of his own money into the race through a combination of loans and personal contributions.

The latest was a $500,000 loan made sometime over the past two months, according to his campaign report. Those funds have helped Perdue keep pace with Kingston, who has earned the backing of the U.S. Chamber of Commerce and two former rivals in the Republican Senate race.

With just over a week to go before the runoff election, Kingston holds an edge in terms of cash on hand, with about $1.2 million. Perdue had about $783,000 in the bank to start July. Overall, Kingston has raised nearly $5.3 million in contributions to Perdue’s $4.6 million, which also includes $1.9 million of his own money.

Beyond the candidates, the race has drawn more than $7.8 million in spending by outside groups. According to Federal Election Commission data, that total puts the Georgia race behind Senate contests in just three other states: Mississippi, North Carolina and Massachusetts

Fully ten percent of that outside spending came in the form of a single $780,000 expenditure by the U.S. Chamber of Commerce designed to bolster Kingston’s chances.

The Chamber paid Revolution Agency of Alexandria, Virginia, $779,116 for TV and digital advertisement to run from July 8th through July 22nd.

This brings the Chamber’s independent expenditures supporting Rep. Kingston to $1,415,451 for calendar year 2014.

Barry Loudermilk considerably outraised Bob Barr, but Barr had more cash on hand for the final three weeks of the runoff — with an assist from his own bank account.

Jody Hice outraised Mike Collins but they have about the same amount of cash available for the final sprint.

Mayor Reed spoke to Georgia Public Broadcasting about what Democratic candidates Michelle Nunn and Jason Carter must do to be competitive in November’s general election.

Atlanta Mayor Kasim Reed says in order for Democrats Jason Carter and Michelle Nunn to win in November, they will have to spend campaign funds reaching out to the 600,000 to 900,000 minority voters in Georgia.
“And if they haven’t invested, I would say somewhere between three to five million in their registration efforts and in their voter contact efforts, I don’t believe they are going to prevail,” Reed told GPB’s Bill Nigut.
Reed says the typical Democratic strategy of waiting until September to reach out to black voters won’t work.
“If someone calls on me at that point, I’m not going to be too responsive to that because I think that’s offensive and I think it’s the old way,” he said. “What needs to happen is you have to communicate with all your constituencies at the exact same time through election day.”

Today, I’ll be on the radio with GPB’s new Political Roundtable, with host Bill Nigut, and fellow guests AJC columnist Jim Galloway, nationally-syndicated writer and political analyst Jackie Cushman, and former Democratic Congressman Buddy Darden. The show airs at 3 PM, and in Atlanta, you can tune in at WRAS 88.5 FM. If you enjoy classic, exotic, or just plain interesting cars, check out my new website, featuring cars photographed in Atlanta and across Georgia, including this Mercedes-Benz 250 SE from 1965-68.