On June 2, 1774, Britain’s Parliament passed the Quartering Act, the last of the Coercive Acts, meant to punish the American colonies and reassert British control. Eventually, the Third Amendment to the United States Constitution would prohibit the forcible quartering of soldiers in private homes.

On June 1, 1775, Georgia patriots sent a care package to their brethren in Massachusetts comprising 63 barrels of rice and £122 after the battles at Lexington and Concord.

Confederate General Edmund Kirby Smith, commanding forces west of the Mississippi, surrendered on June 2, 1865, and this date is generally considered the end of the Civil War.

On May 31, 1971, Georgia Governor Jimmy Carter appeared on the cover of Time magazine as part of a story on changing Southern politics. 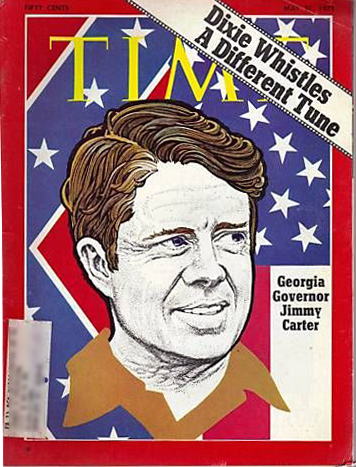 How much do you want to bet that either Jason Carter, Michelle Nunn, or both will be on the cover of Time before the end of 2014?

CNN launched on June 2, 1980. From the video below of CNN’s first broadcast, it is obvious they weren’t using teleprompters that day.

Last week, I gave two presentations on Georgia politics, one to a private group, the second to the Hall County Republican Women. Some of these are pro-tips, some are observations, some are applicable outside Georgia or outside politics, and one is simply a fact about November’s elections. I started by talking about dogs to illustrate my first point.

First, be known for something other than politics. If you are known within your church, community, or larger organization for something other than politics, it allows you to build common ground with others and enhances your moral authority. Example one of this is GaPundit.com, where I have become known primarily to many people as someone who advocates and works for dog rescue, responsible pet ownership, and adoption. On Friday, I got two separate emails from readers who said, “I subscribed to read about the dogs, but have started reading the politics.”

Another excellent example of this Ron Johnson, Second Vice Chair of the Georgia Republican Party, and the GAGOP Veterans Committee. They recently raised funds to purchase a custom sports wheelchair for a disabled veteran and gave it to him so he can play tennis. 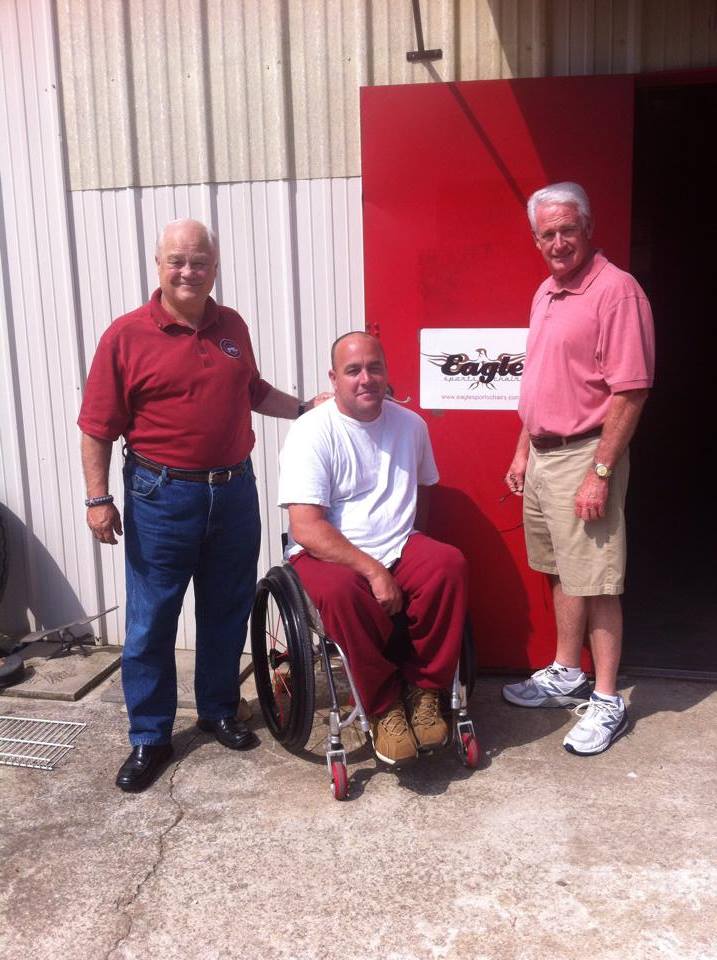 Not only was this a great thing to do, a gift that can change this veteran’s life, but it will make the GAGOP Veterans Committee a powerful voice among our military community and enhance our reputation. It’s one thing to talk to a group and say Republicans care about veterans, and here’s what we have to say about the VA scandal. It’s much more powerful to walk in as a recognized supporter of veterans who puts their money behind their principles. If you choose to follow this tip, find an area of genuine interest and put your shoulder to the wheel.

Another way we can put this into operation is by supporting the GAGOP Community Service Commission’s competition among county party organizations to raise the most money for the Bowen Story Fund.

The Bowen Story Fund will be dedicated to enhancing the lives of other pediatric cancer families by providing help, care and support during emergency hospitalizations and long-term stays. The fund will be used to offer meals, gas cards, and temporary lodging assistance to families who are receiving treatment more than 50 miles away from their home, primarily concentrating on families at Children’s Healthcare of Atlanta.

The competition runs through June 15, 2014, and it’s easy to be part of the efforts to support families fighting pediatric cancer.

Participating county parties will be placed into one of four categories based on county population (under 80,000, 80,000-200,000, 200,001-300,000, over 300,000). The winning county party in each category will receive recognition from the State Party.  The individual winner in each category will receive two tickets to the Fall Victory Dinner and the private reception beforehand, photos with elected officials and special recognition both in the dinner program and at the dinner.

The gift cards should be in the amounts of $10-$25 and from vendors in the area of Children’s Healthcare in Atlanta.  Examples include restaurants like Chili’s, McDonalds, Zaxby’s, Subway, etc; drugstores such as Walgreens and CVS; grocery stores, including Publix and Kroger; big box stores such as Wal-Mart and Target; and gas stations including Shell, RaceTrac and Quick Trip.

Second, in Georgia, the GOP Civil War is not between the Tea Party and the Establishment so much as between “Liberty Republicans” and “regular Republicans.” It’s not necessary that it take the tone of a “war” and we all benefit if the discussion is civil. I personally agree with the libertarian movement within our party on a number of issues, but many times, what could be a fun political discussion becomes a conflict. There are those within the Liberty movement whom I know, like, and trust, and with whom a civil conversation can be had.

The party belongs to all of us, and we need to be more welcoming to those who don’t have years in the trenches. That doesn’t mean they should expect to be elevated quickly to positions of responsibility, but that we should let new members take on small jobs, and as they prove themselves, give them more.

State Representatives Scot Turner, John Pezold, and Michael Caldwell can, I think, be fairly described as having small-l libertarian philosophical leanings. Where they differ is that their willingness to be reasonable and socialize as members of the party makes them effective voices for their philosophy. Seek out those with differing opinions of what it means to be conservative and find those who can make a meaningful contribution. It wasn’t so long ago that the Christian Conservatives who now dominate much of the political conversation in Georgia Republican politics were the newcomers who weren’t welcomed.

Third, there are two main ways to lose a Republican Primary reelection for an incumbent. One way to lose is to do something illegal, morally wrong, or something that is very unpopoular regardless of its rightness. Senator Don Balfour’s failure to make a runoff in his Senate race along with the losses by State Rep. Charles Gregory and State Rep. Sam Moore are primarily this type of shortcoming.

The other way  is to not care enough about campaigning, which can give voters the impression you don’t care enough about representing them. I suspect the loss by State Rep. Willie Talton to newcomer Heath Clark can be ascribed to this. Certainly Talton’s campaign fundraising gives the impression of a lackadaisical approach to his reelection. Senator Jack Murphy’s apparent indecisiveness the week of qualifying could make some wonder if he has the fire to campaign and to represent the voters of his districts; I suspect we’ll learn more about that in his runoff.

If an incumbent’s lack of drive to win reelection means that he has come to understand that other things are more important to him than holding office, it can be the beginning of a new and better life.

Fourth, this year’s voter turnout is a problem and we need to consider whether to keep the current election schedule. The date change came about by a federal court first requiring a date change to allow sufficient time between the federal primary and runoff to allow ballots to be sent to overseas voters at least 45 days before the runoff, but some within the GAGOP thought moving the Primary to May would enhance the ability of mainstream Republicans to vote when it’s convenient for them.

But a significant drop in voter turnout does not signal success. As a party it means our candidates are competing for a narrower cross-section of voters, and that fewer Georgians will be invested in the success of our candidates in November. I hope the state party and the powers that be under the Gold Dome will give careful consideration to primary dates going forward.

Fifth, November ballots will have two amendments to the Georgia Constitution on them for all voters. The first, I call the Shafer Amendment, after its author and primary sponsor, Senate President Pro Tem. Senate Resolution 415 places on the ballot the following question:

Shall the Constitution of Georgia be amended to prohibit the General Assembly from increasing the maximum state income tax rate?”

It’s a simple amendment that prevents the legislature from increasing the state income tax rate unless a majority of voters agree in a statewide referendum to reverse the Amendment.

The Shafer Amendment passed the Senate with a two-thirds majority, with Democratic Minority Leader Steve Henson opposing it and Senator (now Democratic Gubernatorial nominee) Jason Carter fleeing the chamber so as not to have to go on record.

In the House, the bill was carried by State Rep. Matt Ramsey, Republican Whip, and garnered unanimous support for Republicans; House Speaker David Ralston cast a rare floor vote in favor of the bill to provide the two-thirds majority required for passage of an Amendment. Governor Nathan Deal signed the bill.

It also enhances Georgia’s competitive position for new job creation. While some other states have lower income tax rates, even zero, Georgia’s current low rate is locked in by the State Constitution and cannot be easily raised. This will make Georgia even more competitive for new jobs.

The second amendment on November’s ballot, by State Rep. Kevin Tanner (R-Dawsonville), allows the imposition of a surcharge on fines for reckless driving to be imposed and paid to the Brain and Spinal Injury Trust Fund Commission.

The Commission was created by a 1998 Constitutional Amendment that received 73% support among voters statewide and currently receives funding from a surcharge on fines for DUI. As DUI fines and collections have waned, so has funding for Georgians who suffered brain and/or spinal injuries. From the Commission’s website:

Georgians with traumatic brain and spinal injuries deserve lives of independence and inclusion, lives rich with vision and possibilities. Trust Fund awards assist individuals with injuries in reaching these goals. (For more information on Trust Fund awards, see How the Trust Fund Fills the Gaps.)

Collected revenue is distributed in the form of grants to eligible individuals for the post-acute care and rehabilitation of Georgians that have been injured and sustained a traumatic brain injury (TBI) or spinal cord injury (SCI). Eligible Georgians fill out either a paper or electronic application for funding to the Commission.

“Fulton is the epicenter for Keeping Georgia Red,” said Roger Bonds, Chairman of the Fulton GOP. “As such, we must use every tool in our arsenal, including a strong web presence, to connect with voters and communicate our strong message of greater opportunity and freedom, less intrusive and more effective government, and personal responsibility. As people grow tired of incompetent County government and failed Obama policies, we’re here to serve voters with an alternative. Furthermore, re-electing Governor Deal and winning the open U.S. Senate seat will increasingly hinge on strong Republican turnout in North Fulton”

The launch will serve as a catalyst for efforts to reach more voters in Fulton, conduct voter registration, and operate a robust get-out-the-vote effort. The stronger online presence will also enable the Fulton GOP to recruit more members and volunteers, gain more contributions, and better serve its membership with improved services.

“Our goal is to be a click away from those who want to know more about the Republican Party in Fulton County or join our team. President Obama and his team in Georgia are targeting Fulton, and we are ready to take the fight for our values and future to the voters. Fulton County deserves better, and this website is one of many important steps toward victory in November.” Bonds said.

The new site will maintain the same address as the previous, www.FultonGOP.org. Event information and registration, voter resources, and opportunities to join, contribute, and volunteer are available.

Online fundraising and campaign coordination is an area in which Republicans need to catch up to the Democrats. Let’s hope the #FultonGOPLaunch moves the ball down the field for the good guys.