Georgia Politics, Campaigns, and Elections for May 2, 2014

Georgia Politics, Campaigns, and Elections for May 2, 2014

Georgia delegates convened in Augusta on May 4, 1789 to approve a new state Constitution and consider amendments.

General Nathan Bedford Forrest led troops who captured raiders near Rome, Georgia who were intent on disrupting the Western & Atlantic Railroad on May 3, 1863.

General William Tecumseh Sherman began the Atlanta Campaign on May 3, 1864 with troops marching from Tennessee toward Catoosa Springs, Georgia.

On May 2, 1886, Jefferson Davis left Atlanta, headed to Savannah.

Margaret Mitchell was awarded the Pulitzer Prize for Gone With the Wind on May 3, 1937.

On May 4, 2003, I married Mrs. GaPundit, though she didn’t answer to that name at the time. Still doesn’t. Happy Anniversary to my beloved wife. 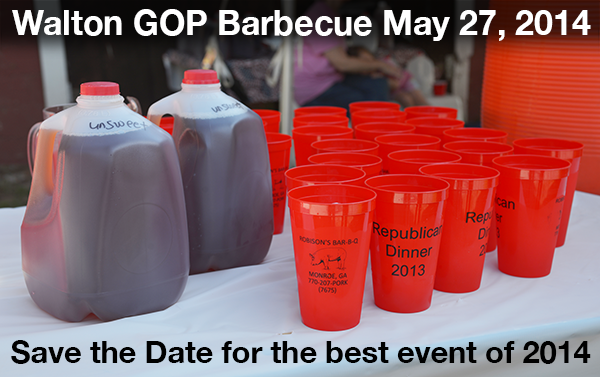 And now a word from our sponsors:

The GOP Senate Primary “SuperPoll”, conducted April 27-29 of 737 likely voters, is weighted for age, race, and gender. It has a margin of error of plus or minus 3.5% with a confidence level of 95%. The results were:

From Walter Jones, for Morris News:

Karen Handel has ridden a wave of growing support to pass Jack Kingston in the GOP Senate primary race to take second place and come within the margin of error with frontrunner David Perdue, according to a poll released this morning for Morris News.

Handel, Georgia’s former secretary of state, has steadily gained in recent surveys as former Nike CEO Perdue has held the top spot. Kingston, a Savannah congressman, has enjoyed little benefit from major investments in television spots that most Republican observers describe as ineffective.

Physicians and congressmen Paul Broun of Athens and Phil Gingrey of Marietta remain rooted in fourth and fifth places, respectively.

Perdue has the support of 22 percent, Handel 21 and Kingston 17, with Broun at 14 and Gingrey 12. Three percent was split between underfunded newcomers Art Gardner and Derrick Grayson. Still, 11 percent can’t make up their minds at the start of early voting.

The poll also shows Nathan Deal easily winning the Republican gubernatorial nomination on May 20 with support from two of every three primary voters. Former Dalton Mayor David Pennington holds 11 percent of the support while State Superintendent of Schools John Barge has 4 percent and 19 percent remain undecided.

InsiderAdvantage conducted the survey by automated telephone calls and online with Opinionsavvy on Sunday, Monday and Tuesday on behalf of Morris News and Fox5 of Atlanta. Responses by 737 likely primary voters were then selected at random to yield a 3.5 percent margin of error. The pollsters weighted the results to reflect the age, race and gender of the expected turnout.

“Kingston has been losing metro-Atlanta female support with his ‘folksy’ TV ads for weeks. Handel, who usually does not poll as well with female voters is picking up significant female support and is starting to leave both David Perdue and Jack Kingston substantially behind with women,” said Matt Towery, InsiderAdvantage’s CEO.

Handel’s campaign credits endorsements from Sarah Palin and Arizona Gov. Jan Brewer, who have each stumped for her, as well as direct-mail and social-media messages targeted to long-time primary voters. Since Handel has always been outspent in all of her races, she’s had to be good at targeting in order to stretch her money.

“This is the third poll in a row showing Karen as the only candidate with momentum,” said Corry Bliss, Handel’s press secretary.

Jack Kingston released his own poll, showing him in first place.

The primary is essentially a race to finish in the top two. If no candidate receives a majority of the primary vote, the two leading vote recipients will advance to a July 22 runoff. The winner is expected to face former Points of Light Foundation CEO Michelle Nunn in the general election for the seat of retiring GOP Sen. Saxby Chambliss.

The poll, conducted by McLaughlin & Associates, found that 43 percent of likely Republican primary voters had a favorable opinion of Kingston, compared to 12 percent with an unfavorable opinion. He had the highest favorables of the five candidates polled and the highest net positive rating.

The poll surveyed 400 likely Republican primary voters April 28-29 using live telephone interviews on both land lines and cell phones. It had a 4.9-point margin of error.

Less news-worthy is that the InsiderAdvantage poll also showed Governor Nathan Deal winning the Republican Primary in a walk.

Matt Towery: “Governor Deal wins in a walk. His opponents have truly run two of the worst campaigns I have seen in decades. Unless a meteorite strikes the Deal campaign he will win with over 75% of the vote. And even if a meteorite were to strike, he would still beat these two with room to spare. Really a silly little contest that will serve to dampen turnout in the GOP Senate contest.”

Tricia Pridemore Congress: An Evening At The Strand With Banks & Shane

You are invited to an evening at The Strand featuring Banks & Shane!

May 3, 2014, 8:00 AM – 10:00 AM
Cherokee Rose Gun Club, 895 Baptist Camp Rd, Griffin , GA 30233+ Google Map
Clay Shoot with Congressman Lynn Westmoreland  Sponsored by Henry County and Spalding County Republican Party
Helping to Support your Second Amendment Rights FOR MORE INFORMATION CLICK HERE TO GO DIRECTLY TO OUR WEBSITE This will be a great opportunity to meet many of the candidates running both locally, statewide and nationally. We may even have a surprise visitor.Find out more »