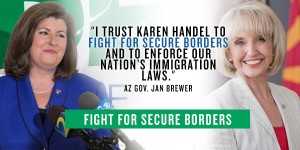 I am excited to let you know that I am supporting Karen Handel for U.S. Senate in Georgia. I trust Karen Handel to fight for secure borders and to enforce our nation’s immigration laws when elected to the Senate.

We agree that addressing border security is the critical first step in fixing the problem of illegal immigration.

Having worked with Karen when we were both Secretaries of State, I know Karen’s record of implementing photo ID and taking on The Obama Justice Department to ensure only U.S. citizens voted in GA elections.

Karen is a strong conservative voice in Georgia, and I believe she will be a great addition to the U.S. Senate and the fight for tougher immigration laws in the United States.

“Now more than ever, we need true conservative leaders in the United States Senate who have track records of getting the job done. In the Georgia race for the U.S. Senate, Karen Handel is that leader.

Having worked with Karen Handel when we were both Secretaries of State, I know Karen’s record speaks for itself. Karen cut her department’s spending by 20% and she knows how to stand up against the Obama Administration. Like me, Karen fought the Obama Administration in Georgia by ensuring only U.S. citizens can vote in elections. I trust Karen Handel to stand with me to fight for secure borders and to enforce our nation’s immigration laws.

Through her dedication, hard work, and courageous spirit, Karen Handel knows how to get the job done. Karen is the conservative candidate that Georgians can count on to successfully fight for conservative results in the U.S. Senate.”