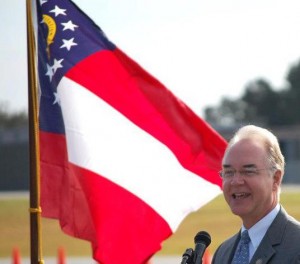 The House of Representatives passed H.R. 1874, the Pro-Growth Budgeting Act, introduced by Congressman Tom Price, M.D. (GA-06). This legislation would require the Congressional Budget Office (CBO) to provide a longer-term, macroeconomic analysis of legislation that is estimated to have a budgetary impact of more than 0.25 percent of the Gross Domestic Product (GDP). Such an analysis would be provided in addition to the traditional scoring estimates issued by the CBO. Congressman Price, vice chairman of the House Budget Committee, issued the following statement in response to today’s vote on the adoption of a realistic analysis requirement at the CBO.

“Washington’s Budget process is broken. Congress has a bad habit of skewing the benefits of its policies and incorrectly predicting their costs. A major reason why is that the tools policymakers are required by law to use to make decisions, to estimate the impact of their decisions, are limited at best. A lack of accurate information does a real disservice to Congress and those we serve. The best way to tackle this problem is by adopting reforms, like dynamic or realistic scoring, into the budget process.

“The traditional or ‘static’  analytical models employed by the Congressional Budget Office to inform Congress on the fiscal and economic impact of its policy prescriptions are inadequate when applied to the American economy. No matter the amount of growth at any one point, there’s no doubt that ours is a dynamic economy built upon the diverse efforts of millions of individuals, families, workers and job creators. The Pro-Growth Budgeting Act gives policymakers an important tool to analyze and estimate the real world impact legislation will have on the lives and livelihoods of the American people. It will help Congress better serve the American people in a way that promotes a stronger economy and fiscal responsibility in Washington.”

The Pro-Growth Budgeting Act previously passed the House of Representatives in the 112th Congress. Companion legislation (S.184) has been introduced in the Senate by Senator Kelly Ayotte (R-NH).