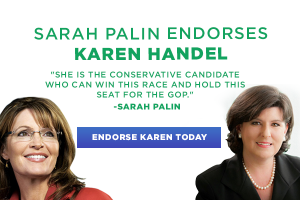 I have a big announcement! I am honored to announce that after reaching out to Governor Sarah Palin, she has endorsed my campaign for U.S. Senate.

I am thrilled to have the support of such a strong conservative leader and I am humbled she thinks I am the person to get the job done in the U.S. Senate for Georgia!

Margaret Thatcher often said: “If you want something said, ask a man. If you want something done, ask a woman.” This quote rings true in the U.S. Senate race in Georgia in more ways than one. This year’s elections are about who we send to Washington to help restore our country after six years of a disastrous administration. It’s not about who has the best rhetoric, the loudest voice, or the best TV ads. It’s about who we trust to keep their word to fight for conservative principles and grow our movement at the same time.

In the U.S. Senate race in Georgia, Karen Handel is just that candidate. Karen is a champion for protecting life and a proud voice in support of it – one we could use in the Senate. As Chairman of the Fulton County Board of Commissioners, she made a name for herself fighting corruption, passing ethics reform, and recouping millions of dollars in stolen taxpayer money. She balanced the budget every year as well. As Georgia’s first Republican Secretary of State, Karen took on the Obama administration to keep Photo-ID in place and ensure that only U.S. citizens vote in Georgia. She cut her department’s waste by nearly 20%, and under her leadership, the Secretary of State’s office became Georgia’s first completely transparent agency by putting all the agency’s expenses online for every taxpayer to see.

Karen has walked the walk when it comes to cutting government waste, providing ethical leadership, and fighting back against big bullying government. We can count on Karen to take her real life skills to Washington to help balance our budget, fight for lower taxes, and do everything she can to keep the government out of our lives.

Voters need to look carefully at a candidate’s record. Look beyond the flashy campaign ads of establishment candidates and the bombastic rhetoric of candidates who claim to be the most conservative in the race. Listen to what Karen says in her debates and candidate forums, and you’ll hear a true conservative leader who can win in November.  This Georgia Senate race is very important to the Democrats and has long-term repercussions for 2016 as Democrats test the waters to see if they can win big in a red state with a woman candidate.  That is why the GOP needs a strong contender like Karen Handel. She is the conservative candidate who can win this race and hold this seat for the GOP.

GOP voters in Georgia have many choices if they want something said, but Karen Handel is the only choice if we want something done.  Karen will get the job done.

Please lend her your support in this critical Senate race. Trust me, you won’t regret it.

I will continue to fight for Georgia and will take my proven conservative record to Washington, D.C. Please join Governor Palin and endorse my campaign today!

Karen Handel for US Senate
http://www.karenhandel.com/