March 19, 2014 is “Bo Callaway Day” in Georgia and flags are flying at half-staff in honor of the late Georgia Congressman and former Secretary of the Army.

“Few individuals throughout our history can match the legacy that Bo Callaway left on Georgia politics,” Deal said. “Bo blazed a trail that led to the dramatic growth of the Georgia GOP, which went from virtually nonexistent when he ran for governor to holding every statewide elected office today. Bo stood up for what he believed in even when the odds and the political system were stacked against him. Georgians are all the better for it. Sandra and I send our deepest sympathies to the Callaway family.”

On March 19, 1916, the first American military air combat mission began in support of an incursion into Mexico under President Woodrow Wilson.

On March 19, 1947, the Georgia Supreme Court ruled in Thompson v. Talmadge on the “Three Governors Affair.” The Court held that the Georgia General Assembly lacked authority to elect Herman Talmadge as Governor, and that because of the death of Eugene Talmadge before he took office, no successor to Gov. Ellis Arnall was in place until the newly-elected Lt. Governor Melvin Johnson was sworn in and became Governor, succeeding Arnall.

So, apparently, there is no “Official Dog” breed of Georgia. The last time it was voted on, in 1991, the Georgia Senate rejected the Golden Retriever on a 37-10 vote against. South Carolina’s official State Dog is the Boykin Spaniel, a breed developed for hunting in the Palmetto State and most commonly found there today.

So what should the official State Dog of Georgia be? The English Bulldog has a claim on the title, though Georgia Tech folks might complain. I think the Carolina Dog, also sometimes called the Tybee Island dog, would be a fine candidate. The Black Mouthed Cur has its partisans, especially among hunters. Coonhounds are very popular and might be fitting, despite neighboring Tennessee using them as a University mascot. Finally, for those suburban Republicans who play a strong role in the Republican caucus, the Golden Retriever might make a comeback.

Maybe we should come up with a dog breed bracket and vote. Let me know who you think should be in it. 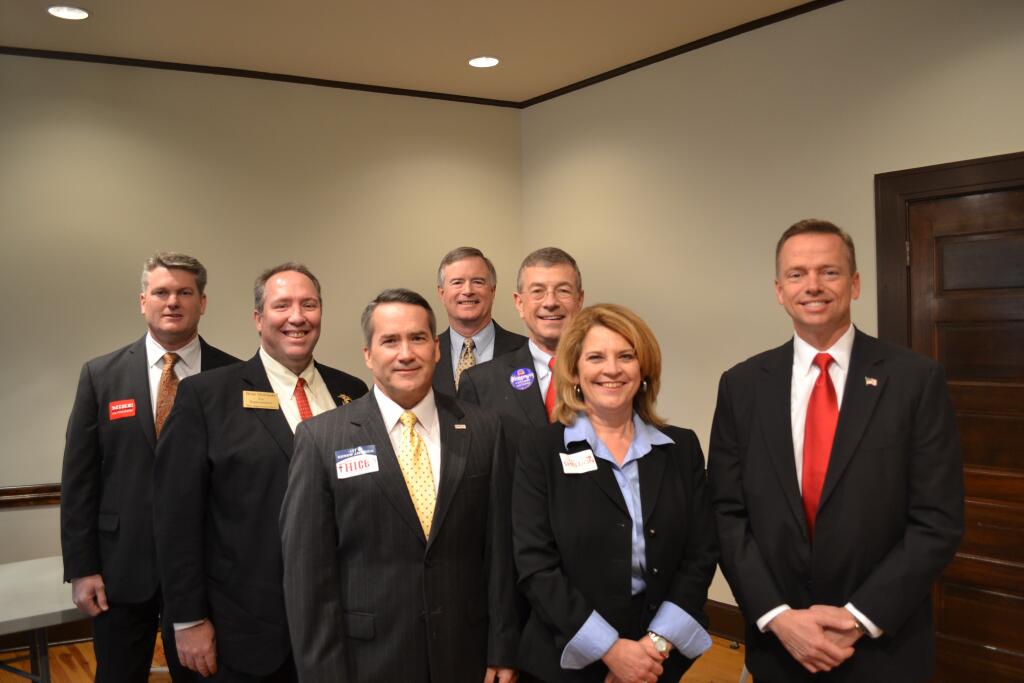 Last night, the Walton County Republican Party and Chairman Roy Roberts hosted a debate among the Republican Candidates for Tenth Congressional District. For a time, Monroe, Georgia was the campaign sign capital of the state.

First person to tweet out the names and twitter handles of the candidates above from left to right will win a free coffee from Starbucks. You must include @gapundit and @toddmr in your tweets to win, and you can use as many tweets as it takes to get the job done. 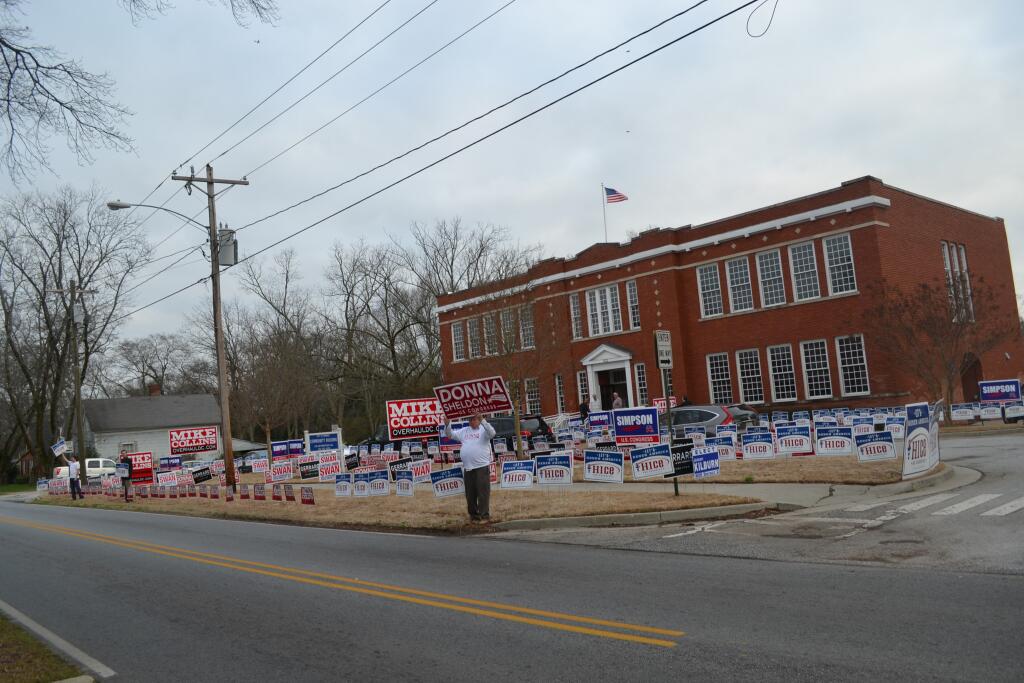 The best play-by-play of the debate is available on our @GaPundit twitter feed.

Associate Editor Jeff Breedlove, who manned the twitter last night at the debate also caught up with some of the candidates afterward for exclusive audio interviews.

Day Thirty-Nine Under the Gold Dome

Senate Bill 98, by Senator Judson Hill, which makes permanent the policy put in place by Governor Deal that prevents state insurance funded abortions except to save the life of the mother, passed after the Senate agreed to minor House changes. Here’s the AJC’s take:

The bill makes no exception for rape or incest, only allowing consideration of a medical emergency involving the life of the mother. It doesn’t make any medical procedure that is legal today illegal. It instead dictates how medical care involving abortions is paid for through the state health plans and through insurance exchanges offered via the Affordable Care Act.

Senate Resolution 415 by Senate President Pro Tem David Shafer is one of the most significant pieces of legislation poised for final passage on Day Forty. After the House passed an amended bill, it is before the Senate for a vote to agree or disagree to the House changes. If it wins final passage, the November ballot will include an Amendment to the Georgia Constitution that would prevent the legislature from raising the top marginal income tax rate that is in effect on January 1, 2015.

The Shafer Amendment passed the State House with 120 votes, which included that of Speaker David Ralston, who traditionally doesn’t vote except to break ties. That meets the two-thirds requirement for passage of a referendum to amend the state constitution. All but two of the House Democrats voted against the Shafer Amendment.

Peggy Noonan on House of Cards

I don’t watch House of Cards. In my opinion, it’s part of our society’s descent into the gutter, as serial killers have become popular anti-heroes in seemingly everything on television. Peggy Noonan has a take on the series in her Wall Street Journal blog that I think is worth reading.

Not to be a scold or humorless, but do Washington politicians understand how they make themselves look when they embrace the show and become part of its promotion by spouting its famous lines? Congressmen only work three days a week.

“House of Cards” very famously does nothing to enhance Washington’s reputation. It reinforces the idea that the capital has no room for clean people. The earnest, the diligent, the idealistic, they have no place there. Why would powerful members of Congress align themselves with this message? Why do they become part of it? I guess they think they’re showing they’re in on the joke and hip to the culture. I guess they think they’re impressing people with their surprising groovelocity.
Or maybe they’re just stupid.
But it’s all vaguely decadent, no? Or maybe not vaguely. America sees Washington as the capital of vacant, empty souls, chattering among the pillars. Suggesting this perception is valid is helpful in what way?

I don’t understand why members of Congress, the White House and the media become cooperators in videos that sort of show that deep down they all see themselves as . . . actors. And good ones! In a phony drama. Meant I suppose to fool the rubes.

And it is all about the behavior of our elites, our upper classes, which we define now in a practical sense as those who are successful, affluent and powerful. This group not only includes but is almost limited to our political class, Wall Street, and the media, from Hollywood to the news divisions.

They’re making their videos, holding their parties and having a ball. OK. But imagine you’re a Citizen at Home just grinding through—trying to do it all, the job, the parenthood, the mowing the lawn and paying the taxes. No glamour, all responsibility and effort. And you see these little clips on the Net where the wealthy sing about how great taxpayer bailouts are and you feel like . . . they’re laughing at you.
What happens to a nation whose elites laugh at its citizens?

John McCallum is up on television

I would have asked the candidate to change his shirt before the shoot. It’s a good ad, but the gingham check, while normally earning a +1, is distracting on video. I also would have used a drop shadow behind the candidate’s name to better highlight it, especially when part of it is over the checked shirt and becomes illegible. But overall, it’s a good ad and looks professional.