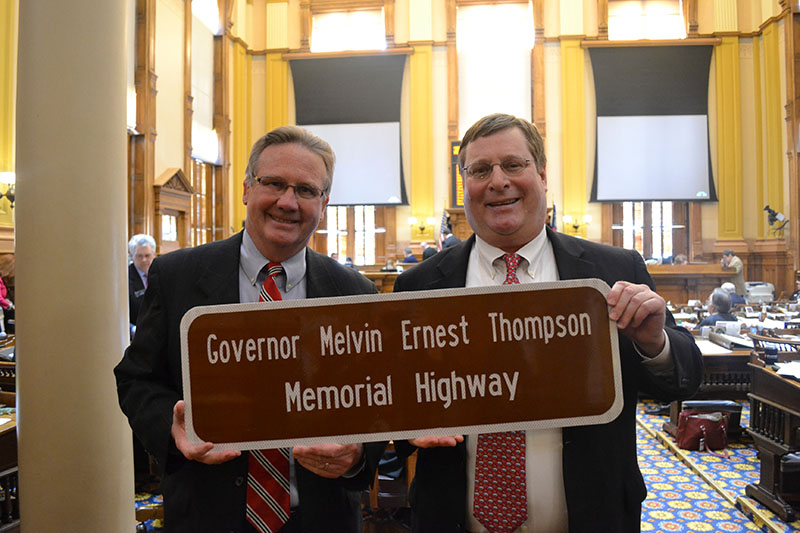 Your Georgia Desk:   This information from www.georgiaencyclopedia.org – a great resource for all things Georgia Melvin Thompson, the first person elected to the office of lieutenant governor of Georgia, served as the state’s governor in 1947-48. He is best remembered for his fight with Herman Talmadge over the governorship after the death of Governor-elect Eugene Talmadge in 1946.

Melvin Ernest Thompson was born in Millen on May 1, 1903, the son of Eva Edenfield and Henry Jackson Thompson. He married Ann Newton, and they had one son, Melvin Ernest Jr. After graduating from Emory University in 1926, Thompson became a high school principal and coach at Emanuel County Institute. He earned a master’s degree from theUniversity of Georgia and completed most of the requirements for a doctorate. Thompson then served as superintendent of the Hawkinsville public school system until he accepted the position of state school supervisor in the Georgia Department of Education. In 1937 Governor E. D. Rivers appointed him assistant state school superintendent.
Thompson actively supported Ellis Arnall‘s successful campaign against Governor Eugene Talmadge in 1942. He served in the Arnall administration, first as the governor’s executive secretary and later asstate revenue commissioner. Early in 1946 Thompson received Arnall’s backing for a campaign for state school superintendent. However, Thompson decided instead to run for the office of lieutenant governor, a position created by the state constitution of 1945. Arnall had already promised to support Senator Frank C. Gross for that position. Undeterred, Thompson ran for the state’s second highest office anyway, and did so without aligning himself with any of the gubernatorial candidates. Thompson won the Democratic nomination under the state’s infamous county unit system with less than 30 percent of the popular vote.

Georgia politics received a jolt in December 1946 when the governor-elect, Eugene Talmadge, died. The state constitution did not specify who would assume the governorship in such a situation. Thompson contended that he should become governor upon his swearing in as lieutenant governor. Arnall, the outgoing governor, claimed that he could remain in office until his successor was chosen and sworn in. In addition to the Democratic and Republican Parties’ nominees, several other candidates received write-in votes in the general election, including the son of the dead governor-elect.Herman Talmadge contended that the legislature could choose the next governor from the three living gubernatorial candidates who received the highest number of popular votes in the general election. Talmadge fell into this category. The situation became known as the “three governors controversy.” Eventually, Arnall removed himself from contention and threw his support behind Thompson’s claim.
After the legislature elected Herman Talmadge governor in January 1947, both Arnall and Thompson refused to recognize the election. Nevertheless, Talmadge exercised gubernatorial power for more than two months. The state’s highest court finally ended the Talmadge governorship by ruling that hislegislative election was invalid and that Thompson should serve as acting governor until the next general election in 1948. The court directed that at that time the voters would choose someone to complete the remaining two years of Eugene Talmadge’s term.

Seldom had a governor begun an administration under such trying conditions as Melvin Thompson did in 1947.

He addressed the legislature for the first time as governor two days prior to its adjournment. The lawmakers were bitter over the judicialremoval of Talmadge, whom they had elevated to the governorship, and they refused to pass an appropriations bill or to provide additional revenue to fund Eugene Talmadge’s platform of expanded state services. Despite lingering bitterness over the three governors controversy, Thompson could claim some accomplishments in his brief tenure as governor. He managed to increase state spending without new taxes, thanks to an unanticipated increase in state revenue. His achievements included raising teachers’ salaries, increasing spending for education, expanding the roads and bridges building program, and improving the state’s park system. However, he considered his greatest accomplishment to have been the state’s purchase of Jekyll Island.

Herman Talmadge defeated Thompson in the 1948 Democratic gubernatorial primary, and two years later he defeated Thompson in a race for a full gubernatorial term as well. In 1954 Thompson unsuccessfully sought the governorship again. Finally, the persistent Thompson ran against Talmadge in 1956 for a seat in the U.S. Senate and lost. After this defeat, Thompson never sought elective office again. He retired to the south Georgia city of Valdosta, where he became a successful real estate agent. He died in 1980.
Thompson’s low-key personality paled in comparison with the flamboyant personalities of his contemporaries who occupied the governor’s office. Unusual circumstances elevated him to the state’s highest office. Unfortunately for him, he never convinced the voters that they should elect him to a higher office than that of lieutenant governor.