On March 5, 1735, James Oglethorpe presented a budget to the trustees of Georgia and proposed seeking an appropriation from Parliament, thus beginning the addiction of the Georgia government to Other People’s Money.

On March 5, 1869, the United States Congress refused to seat Georgia’s elected members of the House and Senate.

On March 5, 1977, President Jimmy Carter held the first “Dial-A-President” radio broadcast in which he fielded questions from radio listeners.

Ron Daniel brings you more on the Presidential Q&A from 1977.

Regardless of Carter’s policy positions and his answers to questions, “Ask President Carter” was a truly historic broadcast. Never before had the President been accessible via telephone on a live radio broadcast. And the questions presented to the President weren’t confined to one or two issues that he had been prepared to handle. One can argue that the American people were also fascinated with the concept of calling and speaking directly to Carter; nine million people called into the broadcast trying to reach him.

The President seemed to enjoy the broadcast as well, remarking: “[t]he questions that come in from people all over the country are the kind that you would never get in a press conference. The news people would never raise them, like the Ottawa Indian question. And I think it’s very good for me to understand directly from the American people what they are concerned about and questions that have never been asked of me and reported through the news media.” 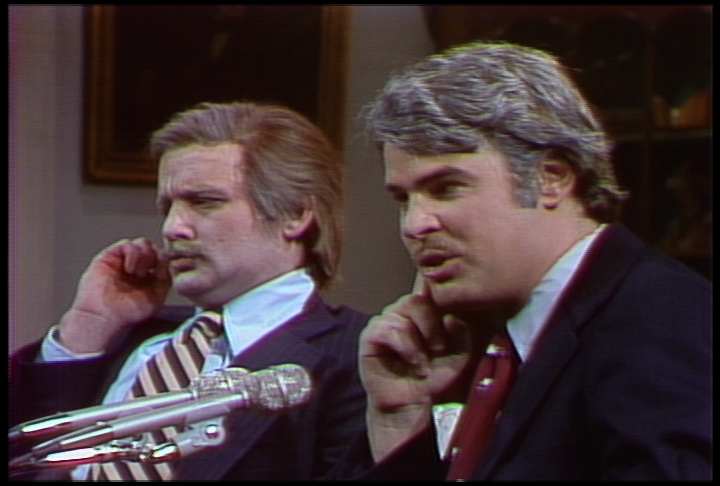 Modified Open Rule
HR 1038 Georgia Department of Education and others; place Georgia at the forefront
of the return of manufacturing to the United States; recognize and
encourage (ED&T-Stephens-164th)

I’m trying a few new things in our polling system that should not change the results but make the workflow smoother. In order to test everthing, I ran a survey in the Tenth Congressional District last night, using the announced candidate. As of the time I write this, all but one of the announced candidates have qualified for the election, and no new candidates have appeared. We surveyed likely Republican Primary voters, sample size is 824 respondents. We weighted for age range and gender.

So, here are the results.

First, I asked a question about the ballot for Governor

If the Republican Primary for Governor of Georgia were held today and the candidates were John Barge, Nathan Deal, the incumbent, and David Pennington, for whom would you vote?

Second question was the Congressional Ballot:

There was nothing particularly revealing about the crosstabs, but if you’d like to see some, email me and I’ll send them. I’m not surprised to see Mike Collins and Jody Hice leading, as Collins appears to have been campaigning more aggressively, and Hice has high name ID.

I was somewhat surprised to see former State Rep. Donna Sheldon in a distant third, but if her strategy has been to raise money and hold it all to spend once we get closer to the election, I think she probably can become competitive.

By the time you read this, the Columbus, Georgia Chamber of Commerce will have left for their 2014 Columbus Region Day at the Capitol in Atlanta. I am told that lunch will be provided for legislators and staff members with their name badges at The Depot. Even if you’re unwilling for ethics reasons to accept so much as a refreshing cold can of Coca-Cola, legislators are encouraged to attend to hear more about how the Columbus area is creating jobs and a higher quality of life for its citizens. 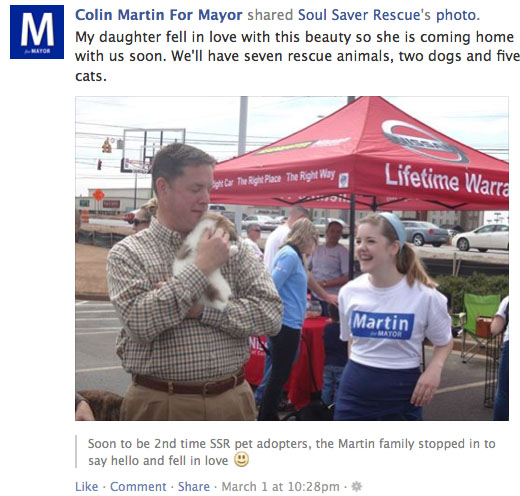 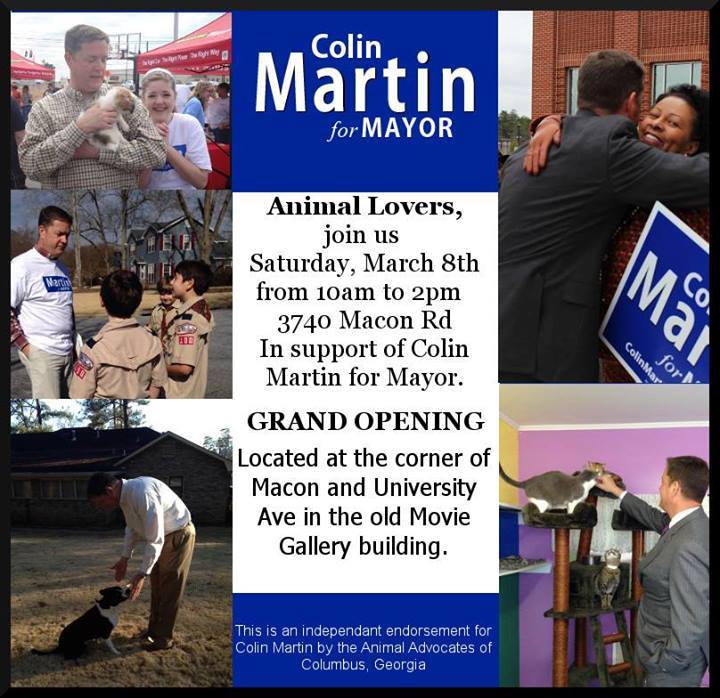 Colin is also making improvement of the Columbus Animal Control agency part of his campaign. I believe that most jurisdictions in Georgia can do a better job of saving animals instead of killing them, and this policy position is one of the reasons I am supporting Colin Martin for Mayor. 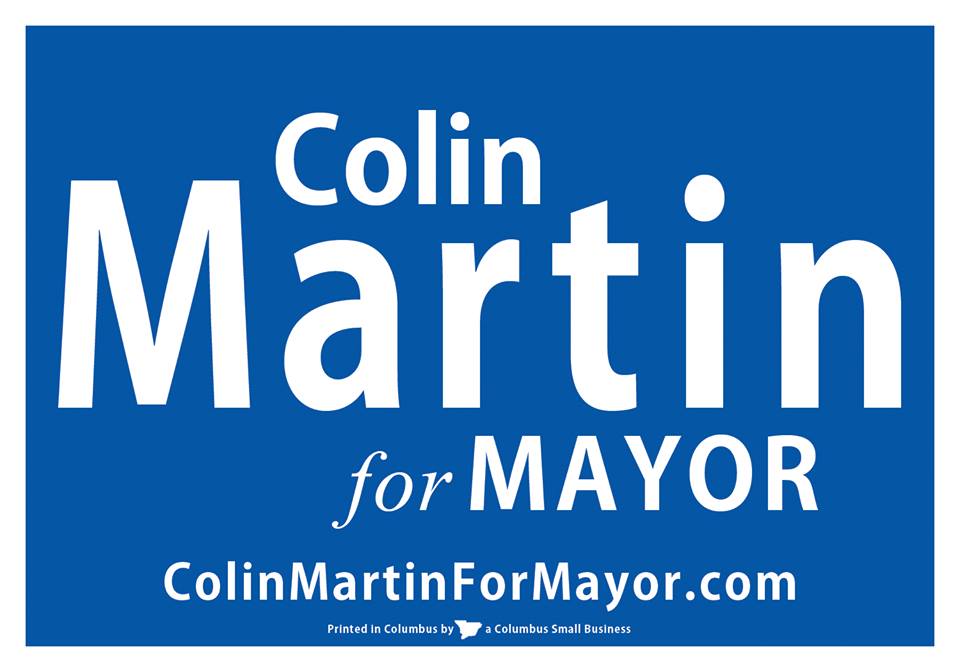 If you’re in the Columbus area, you’ll see Colin’s signs and you may notice what appears to be a “Paid for by” disclaimer at the bottom. But it’s different. 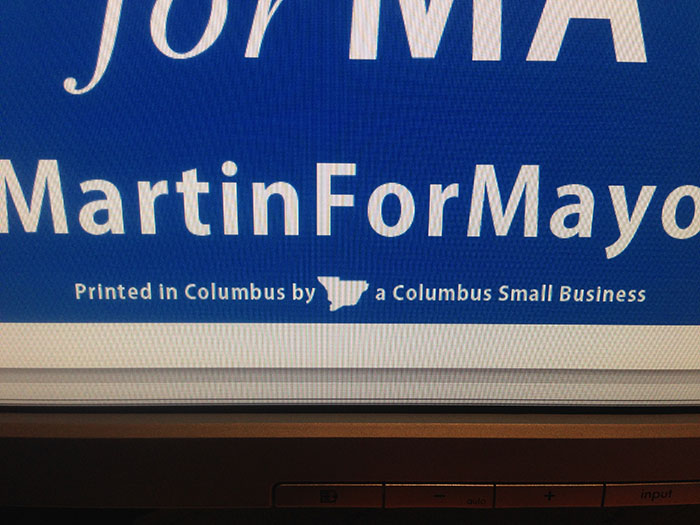 That’s a great idea and shows that in his campaign he’s supporting his local businesses, not simply buying for the lowest cost from an out-of-state vendor. Does it matter in the election? I don’t know, but when we’ve seen a recent election in which a candidate got into the runoff by two votes over the third-place finisher, it’s worth doing this, as there’s no additional cost and it might be worth a couple votes in any case. Just make sure you’re honest about this – faking it could backfire.

Overheard at the Capitol

Senator Cecil Staton’s Senate in a Minute for March 4, 2014

Following are links to audio interviews recorded yesterday at the Capitol:

Brian Kemp: Qualifies For Re-Election as Secretary of State

A Lesson in Political Communication

A quote attributed to multiple sources says, “The secret of success is sincerity. Once you can fake that you’ve got it made.” There’s plenty of fake sincerity in politics, but truly speaking from your heart in a way that connects with your viewers or listeners cannot be faked, and it’s something that we as Republicans and Conservatives need to work on.

About a year ago, I wrote in response to the RNC’s insistence that Republicans must be more inclusive when speaking to voters, especially when it comes to women. I discussed how Governor Nathan Deal and Democratic State Rep. Stacey Evans spoke in very different ways about the same bill. Gov. Deal presented the fiscal and economic justifications, while Rep. Evans connected state dollars and cents to the dreams of parents and citizens across the state. Evans’s statement was particularly effective.

Yesterday, I was talking to a State Representative as he prepared to qualify for reelection. Early in the session, after Speaker David Ralston indicated he was open to a discussion of whether marijuana could be legalized for medicinal purposes, the Representative was opposed to anything that sounded like legalization of marijuana. On Monday he voted for HB 885, which moves toward allowing medicinal use of an oil derived from Cannabis under strict regulation.

I asked him what the difference was and he told me about a constituent of his whose child suffered from seizures and how the constituent was upside-down on his home mortgage, and so couldn’t sell it and move to Colorado to help his child. “He told me he had never voted before….he seemed like he was reticent to talk to ‘a politician,’ but he spoke from his heart about what this would mean to his family and his child….that’s something we need to get better at doing if we want to win elections,” he said.

Recently, we have seen a tour de force of political communication by the families who support legalizing medicinal CBD oil derived from cannabis and members of the General Assembly who join them. This is a case study for how to communicate with voters and politicians. It starts with two simple truths: first, speaking from the heart is often more powerful than speaking from the brain when engaging others; and second, people understand stories differently than they understand facts and figures.

I’m not suggesting that facts and figures aren’t important – any effective politics begins with understanding the facts about the situation in which you find yourself. But if all you’re doing is communicating the facts, without connecting them to the outcomes that Georgians seek from their state, you’re losing points.

Sincerity should not be faked, but it can be practiced. We can become better at communicating the full range of meaning to our viewers and become better communicators. I’ll be discussing this at greater length in the coming days.

I was pleased to be quoted in an article in U.S. News and World Report that was published yesterday.

The Senate 7: The Races That Will Determine 2014 Control

It’s the debut of U.S. News & World Report’s monthly rankings of the hottest Senate races in the country.

If Republicans wake up Nov. 5 just short of a majority, the primary race that’s percolating in the Peach State now could be the reason.

The Republican establishment nightmare? If Rep. Paul Broun – the most unapologetically ideological and sharp-tongued of the lot – is one of the last two standing. “I think the one who has the clearest path, the best chance of making a runoff is Paul Broun,” says Todd Rehm, an unaffiliated Georgia-based GOP consultant who runs the Georgia Pundit website.

I’m neither endorsing nor supporting anyone in the Senate race, so please don’t take my statement about Rep. Broun as such. But the clarity of his vision and statements gives him strong support among two different, and often opposing, constituencies — strong Christian Conservatives, and “Constitutional Conservatives.” The high intensity of support he receives gives him a base of followers that would crawl over broken glass to vote for him.

While I think Broun has the clearest path to a runoff berth, I think he may be weaker than whomever joins him in the second round of voting. Karen Handel might have broader support and a top-notch grassroots organization. Jack Kingston, David Perdue, and Phil Gingrey are all likely to vastly outspend Broun, both to make a runoff, and in the runoff itself. But I haven’t seen intensity of support for any of the other leading candidates to rival that which Broun enjoys.