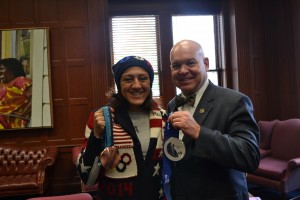 DUGAN: Update from the Capitol

As we end our seventh week of legislative work at the State Capitol, I would like to take a moment to thank those constituents from the 30th district who have taken the time to engage in the legislative process. I have met with countless students, members of special interest groups and concerned citizens who all call the 30thdistrict home. Your involvement means so much to me, and I am privileged to work on your behalf.

With Crossover Day set for Monday, March 3, we must pass all bills to the House of Representatives before the midnight deadline.  If any bill does not receive a passing vote in its original chamber, then it cannot move on in the legislative process and must be revived in the next legislative session.

This week the Senate gave our final stamp of approval to the Amended FY ’14 supplemental Budget.  This $20.2 billion budget runs through June 30, 2014, and includes increases to K-12 education and the State Health Benefit Plan.  Since the House and Senate have come to an agreement on this budget, the bill will now head to Governor Deal’s desk where it will receive his signature and thus signing it into law.  Now we are focusing all of our attention on the General FY’15 budget which the General Assembly is required to pass by the end of session.

It was a great to stand alongside colleagues from the Douglas County Delegation to welcome Winter Olympian and Douglas County resident, Elana Meyers to the Capitol.  I want to extend my congratulations to Meyers and her teammate, Lauryn Williams, who won the silver medal in the women’s two-person bobsled competition at the 2014 Winter Olympic Games in Sochi, Russia.

The Senate took legislative action on bills that are now in the House for consideration, some of this legislation included:

Senate Resolution 415 proposes a constitutional amendment limiting the power of the Georgia General Assembly to raise the state income tax above its current rate.

Senate Bill 167 would allow Georgia to move away from national standards, currently known as the “Common Core,” and limits the collection and sharing of student data. The bill also provides new protections for the privacy of students in order to prevent life-long data tracking.

Senate Bill 397 would require insurers to cover children six years of age or younger who are diagnosed with Autism. Coverage for applied behavior analysis may be capped at $35,000 annually.

Senate Bill 93 allows the use of suppressors on legal hunting firearms and suspends hunting privileges of a person convicted of violating certain hunting regulations.

The General Assembly will convene again on Monday, March 3 for Day 30 of the 2014 Legislative Session.  I look forward to seeing many of you at the State Capitol this year and encourage you to reach out to me with any issues that you feel should be of importance to your elected officials.  As always, it is a pleasure to serve the 30th Senate District. If you have any questions or concerns, please do not hesitate to contact my office at 404.656.0036 or via email at mike.dugan@senate.ga.gov.