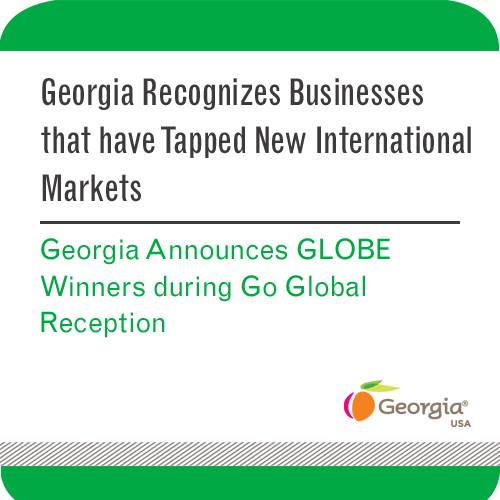 ATLANTA, Feb. 18 – The Georgia Department of Economic Development (GDEcD) announced the winners of the GLOBE (Georgia Launching Opportunities By Exporting) Awards during the Go Global Reception on Monday night. Governor Nathan Deal recognized 53 companies who entered into a new international market in 2013 at the first annual GLOBE Awards at the InterContinental Buckhead.

“International trade plays a key role in maintaining Georgia as a leader in the global marketplace,” said GDEcD Commissioner Chris Carr. “With 14,500 exporters in our state, it is important that we not only encourage companies to explore international markets, but also recognize the companies that have been successful in this venture.”

Georgia provides international representation for Brazil, Canada, China, Chile, Colombia, Europe, Israel, Japan, Korea, Mexico and the United Kingdom and Ireland. In FY13, Colombia became the 11th strategic market for Georgia, making our state the only U.S. country to have representation in this region.

Exports create twice as many jobs as domestic trade. For every job created in making a product, another is created in getting the product to an international market. In 2013, Georgia had a record-breaking export value of $37.6 billion. International trade among Georgia companies has supported more than 300,000 jobs in Georgia.