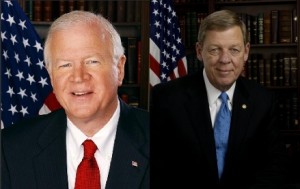 U.S. Senators Johnny Isakson, R-Ga., and Saxby Chambliss, R-Ga., this week joined all 45 Republican senators in writing to the president to again call for approval of the Keystone XL pipeline.

The senators’ letter comes in response to the State Department’s release of the fifth and final environmental impact statement on the Keystone XL pipeline that found the project would have no significant impact on the environment, clearing the way for approval of the project.

The $7 billion, 1,700-mile, high-tech Keystone XL pipeline will carry 830,000 barrels of oil a day to U.S. refineries, including oil from Alberta, Canada, in addition to 100,000 barrels per day of light, sweet crude from the U.S. Bakken region in North Dakota and Montana. During the construction phase, the project will create 42,000 jobs, according to the U.S. State Department.

The full text of the letter is as follows:

We are writing to request that you approve the Keystone XL Pipeline permit application without further delay.  In 2011, Secretary Clinton said a decision would come before the end of 2011.  On March 14, 2013, you told the Senate Republican caucus that you would make a decision on the Presidential Permit before the end of the year.  We are still waiting on that decision.

As you know, the TransCanada Corporation applied for a Presidential Permit from the U.S. Department of State to construct and operate the Keystone XL pipeline in 2008.  For six years, the Administration has had the opportunity to evaluate this application including any environmental considerations.

Once again, the State Department has conducted a thorough review of the environmental impacts of the Keystone XL pipeline and has found that the pipeline will have no significant impact on the environment and is the safest way to transport the oil.  The Environmental Impact Statement further indicates U.S. rejection of the permit will not affect Canada’s decision to develop these oil resources.  In fact, these resources are more likely to be developed in an environmentally friendly manner if exported to the U.S. by pipeline.  There is no question that Canada will develop these resources.  The only question is whether the oil will be sold to the United States or to our economic competitors abroad.

Rejecting the Keystone pipeline will cost thousands of American jobs and prevent our country from accessing a large supply of North American energy.  Independent studies have demonstrated the pipeline’s construction will create thousands of jobs directly and indirectly. Further, the pipeline will allow U.S. access to 800,000 barrels of Canadian oil daily from a stable and dependable economic partner, which helps us to diversify our supply and offset our dependence on the Middle East and other more volatile oil producing countries.

By any reasonable standard, the Keystone Pipeline is clearly in our national interest.  Keystone will greatly advance our energy security interests by establishing a reliable supply of oil from one of our most stable trading partners and closest friends and will lead to economic growth and help create good, sustainable jobs for U.S. workers.

We ask that you approve the application.