The House of Assembly, Georgia’s legislative body, held its second meeting after statehood on February 6, 1788 in Savannah.

On February 6, 1952, Governor Herman Talmadge signed resolutions of the General Assembly that included:

A resolution calling on Congress to call a convention to propose a constitutional amendment to repeal the Sixteenth Amendment and instead allow a maximum rate of 25 percent on any federal income, transfer, gift, or inheritance tax.

A resolution urging U.S. Senator Richard B. Russell to run for the presidency.

On February 6, 1956, Governor Marvin Griffin addressed a joint session of  the Georgia General Assembly, asking their support for House Resolution 1185, which introduced the idea of “interposition,” in which the State of Georgia would declare the U.S. Supreme Court’s 1954 and 1955 Brown v. Board of Education decisions “null and void” in Georgia. That day Griffin also signed a raft of legislation for his “massive resistance” agenda against integration of state schools.

Ronald Wilson Reagan was born on February 6, 1911 in Tampico, Illinois. In 1980, Reagan would be elected President of the United States, beating incumbent Jimmy Carter. When he was born, his father said, “he looks like a fat little Dutchman.  But who knows, he might grow up to be president some day.”

On February 6, 1989, Ronald Reagan spoke at the University of Southern California and addressed a question about banning certain types of guns in the wake of a shooting.

On June 12, 1987, Reagan spoke in then-West Berlin at the Brandenburg Gate, one of the great speeches of the Twentieth Century.

On February 6, 1985, Reagan gave the State of the Union. During the speech he announced what would be known as the “Reagan Doctrine.”

Reagan began his foreign policy comments with the dramatic pronouncement that, “Freedom is not the sole prerogative of a chosen few; it is the universal right of all God’s children.” America’s “mission” was to “nourish and defend freedom and democracy.” More specifically, Reagan declared that, “We must stand by our democratic allies. And we must not break faith with those who are risking their lives—on every continent, from Afghanistan to Nicaragua—to defy Soviet-supported aggression and secure rights which have been ours from birth.” He concluded, “Support for freedom fighters is self-defense.”

With these words, the Reagan administration laid the foundation for its program of military assistance to “freedom fighters.”

State Rep. Brooks Coleman (R-Duluth), Chairman of the House Education Committee has picked up a second challenger for his reelection campaign in House District 97. Jef Fincher, who ran for Congress from the Seventh District in 2010 announced he will run for the seat currently held by Coleman.

Jef currently serves on the Executive Committee of the Gwinnett Republican Party.  He is a founding member of C.H.A.R.G.E. (Citizens Helping America Restore Government Ethics).

Jef views the Primary election as the time when candidates put their ideas before the public.  “I would like to take the leadership skills and experiences I have had to the next level – that of representing the people (or being the people’s voice at the state capitol). Above all, I want to see that Georgia retains its sovereignty as a state. I believe in self-governance and limited government. There are many pressing issues – jobs, economy, state spending, healthcare and education. I look forward to meeting with voters, listening to their ideas and concerns and sharing my vision of participatory citizen governance.”

State Rep. Delvis Dutton announced that he will run for Congress from the Twelfth District, in the Republican Primary to challenge incumbent Democrat John Barrow.

“I’m humbled by the overwhelming support I’ve received from across the district,” stated Dutton. “I want to take Georgia values and Georgia commonsense to a broken Washington. We need leaders who will put people and principles before politics. I look forward to working hard to earn the support of voters as I travel the 12th district.”

Delvis Dutton is a Christian, husband, father, family man, small business owner, farmer, conservationist, and an avid outdoorsman. A lifelong resident of South Georgia he grew up working on the family farm, he attended Pinewood Christian Academy in Bellville and Georgia Southern University. He now lives in Glennville with his wife Danielle and their two children.

At 22 he started a small water-well drilling business, General Pump and Well, which has serviced more than 2,000 customers in Southeast Georgia. Dutton has a unique understanding of the challenges facing the 12th District. He is a proud conservative who is focused on creating rural jobs and ensuring that the government operates within its means. Dutton is a strong supporter of smaller government and supports the need for a balanced budget amendment.

the Lee County Republican Party is holding a Lincoln Day Dinner on February 27, 2014, with proceeds benefiting the Bridging the Gap Foundation. The featured speaker will be LTC Allen West, who served in Congress from Florida.

Bridging The Gap of Georgia is a 501(c)(3) non-profit charitable organization created to assist veterans with their transition home.  Many of the veterans we serve suffer from Post-Traumatic Stress Disorder (PTSD), Traumatic Brain Injury (TBI), Combat Stress and are homeless. We utilize a mentorship program to enable veterans to function as productive members of our society by addressing their housing, job placement, and health needs.

For the 1st Annual Lincoln Day Dinner, our featured speaker is LTC. Allen West who will share with the audience his extensive knowledge and experience, as well as provide insight on the support systems needed to enhance services to veterans. Attendees will get valuable information about Bridging The Gap of Georgia and initiatives that can address the needs and issues of veterans in their local community.

Please find detailed information about the event below.

LTC. Allen West is a Georgia native, former member of the U.S. House of Representatives, Fox News contributor and served in both Operation Desert Storm and Operation Desert Shield.  His book, “Guardian of the Republic” is due to be released in April 2014.  Throughout his years leading troops, raising a loving family, serving as Congressman in Florida’s 22nd district, and emerging as one of the most authentic voices in conservative politics, LTC. West has never compromised the core values on which he was raised: family, faith, tradition, service, honor, fiscal responsibility, courage, and freedom.

We had an opportunity to speak with West at the Georgia Republican Convention this year and he has a interesting prescription for effective outreach to black voters.

On Monday, March 17, 2013, LTC Allen West will give the keynote address at the Cobb County GOP 2014 Presidents Day Dinner.  You will not want to miss this very special evening at the Renaissance Waverly Hotel on Monday, February 17th, so mark your calendar now.  Tickets will be limited and are certain to go fast, so be watching your mailbox for your invitation with the details.

Yesterday, Common Core backers held a press conference in the Capitol to discuss their reasons for backing higher educational standards.

the business community took the unprecedented step of publicly backing – and asking everyone else to back – something fairly simple: Wanting little Johnny to learn how to read and add up two and two, and being able to measure how well Johnny in Georgia does it compared to William in New York and Sally in California.
Common Core’s backers held a press conference at the Capitol to bolster support for the educational standards used by Georgia and 45 other states.

Chris Clark of the Georgia Chamber spelled out what it would mean if Georgia backed away from the common education standards it adopted in 2012.

“It sends messages to companies all around the world that we’re going backwards,” he said. “We’re not moving the ball forward. We’re not having more rigorous standards. We want to lessen those standards. And that doesn’t give us a 21st century workforce. And it doesn’t help our kids compete for seats at Georgia and Georgia Tech and Harvard and Yale. We think it sends the wrong message and it wastes taxpayer dollars.”

But Chris Clark isn’t only the head of the Georgia Chamber. He’s also the father of a second-grader. And here’s something else he said that any parent can relate to:
“This is simply saying by the end of second grade, he can count to 20,” he said of his son. “That’s a pretty low bar. It should probably higher than that. But it gives us a benchmark.”

The Atlanta Braves unveiled new red jerseys to honor our military that include “Braves” in navy blue script with white stars. Major General Jim Butterworth, Adjutant General of Georgia, participated in the unveiling. 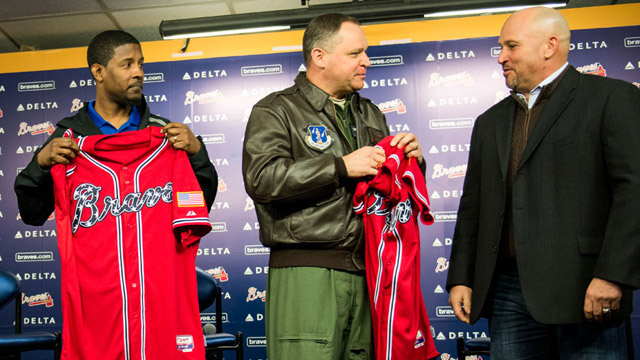 The jerseys will be worn:

After each game the jerseys are worn, they will be auctioned off online with the proceeds going to several military-supportive charities including the USO, the Wounded Warrior Project, United Military Care, Inc., the Shepherd Center’s SHARE Program and BraveHeart: Welcome Back Veterans Southeast Initiative. A portion of the proceeds from the sales of authentic military appreciation jerseys sold at Turner Field and the Braves Clubhouse Store at CNN Center will go to the Wounded Warriors Project.