John and Charles Wesley arrived at Tybee Roads, at the mouth of the Savannah River on February 5, 1736, along with James Oglethorpe and 254 other colonists.

The 1777 Constitution was progressive for the time, outlawing primogeniture and entail, English common law doctrines that controlled inheritance of land.

Primogeniture ensured that the eldest son in a family inherited the largest portion of his father’s property upon the father’s death. The practice of entail, guaranteeing that a landed estate remain in the hands of only one male heir, was frequently practiced in conjunction with primogeniture. (Virginia abolished entail in 1776, but permitted primogeniture to persist until 1785.)

Georgians restructured inheritance laws in Article LI of the state’s constitution by abolishing entail in all forms and proclaiming that any person who died without a will would have his or her estate divided equally among their children; the widow shall have a child’s share, or her dower at her option.

The Southern Pacific Railroad completed its “Sunset Route” from New Orleans to California on February 5, 1883, giving the SP a dominant position in transcontinental railroading.

President Franklin Delano Roosevelt announced his “court packing” plan on February 5, 1937. After the United States Supreme Court found some of his “New Deal” legislation unconstitutional, Roosevelt’s proposal would have encouraged the retirement of justices older than 70 and for those who did not retire, appoint an assistant Justice with full voting rights on decisions by the Court.

On February 5, 1945, Governor Ellis Arnall signed legislation abolishing the poll tax, making Georgia the first Southern state to do so.

Georgia’s 1877 constitution authorized the tax, which limited voter participation among both poor blacks and whites. But most whites got around the provision through exemptions for those whose ancestors fought in the Civil War or who could vote before the war.

In 1937, the U.S. Supreme court upheld Georgia’s poll tax as constitutional. But in 1942, Georgia voters chose Ellis Arnall for governor and the progressive Arnall ushered in a wave of reforms, including abolishing Georgia’s poll tax.

Under the Gold Dome today 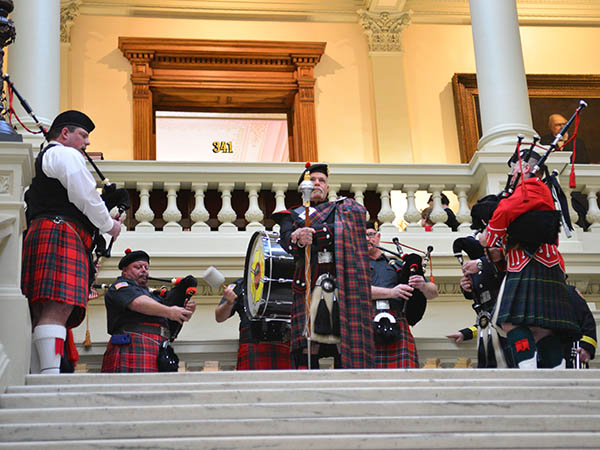 At 11 AM, Hugh P. Thompson, Chief Justice of the Georgia Supreme Court will give his first “State of the Judiciary” address in the House Chamber to members of the House and Senate.

The Chief Justice will highlight the need for civil legal services, especially in rural parts of the state. Seventy percent of Georgia’s lawyers work in the five-county metropolitan Atlanta area, yet six counties have no lawyers at all. People’s legal needs involve fundamental rights, such as the right of the elderly to have recourse when they are defrauded of their life’s savings.
As a result of the lack of adequate legal services, courts around the state are seeing a dramatic increase in the number of people representing themselves. “The reality is that poor people who represent themselves often lose,” the Chief Justice will say.
He will underscore efforts by a number of judges to respond to these problems, update the Legislature on progress the judicial branch has made in implementing criminal justice reform, and recognize one judicial hero who exemplifies the characteristics common to Georgia’s judges.

Most Senate Resolutions don’t have the force of law, and certainly don’t typically spark international incidents. Not so much for Senate Resolution 798, which honors He Beom Kim, Consul General of the Republic of Korea, and contains this passage:

WHEREAS, the Korean peninsula of Asia, bound by its East and West Seas, is the ancestral home of the Korean people….

I thought it might raise eyebrows when an article appeared in the “Diplomacy” section of a Korean news agency.

A U.S. state legislature took a highly symbolic step Tuesday supporting South Korea’s campaign to promote the use of the “East Sea” to identify the waters between Korea and Japan.

South Koreans believe the water between Korea and Japan should be called the East Sea, although the Sea of Japan is still more popular in the international community as a legacy of Japan’s imperialistic past.

For better or worse, another Korean agency retaliated by showing footage of the United States Congress while referring to the Georgia State Senate. A more serious breach of diplomacy may have occurred when that agency referred to the Commonwealth of Virginia as a “state.”

This comes as the U.S. state of Virginia awaits its lower house’s decision on whether to require public school texts in Virginia to call the water BOTH the “East Sea” and the “Sea of Japan.”
Korea argues the name “Sea of Japan” reflects Japan’s imperialistic past and that at the very least, both names should be used. 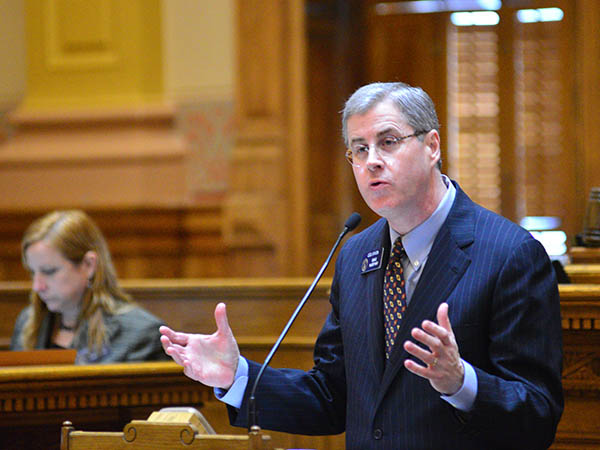 Yesterday, State Senator Cecil Staton announced he will not run for reelection.

Sen. Cecil Staton (R- Macon) has decided not to seek re-election in 2014. Staton was elected to serve the 18th Senate District in 2004, which represents Crawford, Monroe, Peach and Upson Counties and portions of Bibb and Houston Counties. Prior to the 2011 redistricting, the district also included Jones County. “It has truly been one of greatest honors of my life to serve the people of the 18th Senate District over the past ten years,” said Sen. Staton. “Public service is a high calling, and one I have never taken lightly. I am incredibly thankful for the continued support of my constituents who have entrusted me to represent their values under the Gold Dome. Central Georgia is my home, and I will always work to strengthen the region’s reputation as one of the state’s best places to live, work and raise a family.”

On the same day Staton announced his impending retirement from the Senate, that chamber passed Senate Resolution 736, of which Staton was the lead sponsor.

The Georgia Senate agreed 37-16 that states should band together and amend the U.S. Constitution to limit federal spending, power and congressional terms.

“We sense an utter frustration (from voters) with what’s going on in Washington, D.C., today,” resolution sponsor state Sen. Cecil Staton, R-Macon, told his colleagues from the Senate floor on Tuesday ahead of the party line vote.

The resolution tells the U.S. Congress that Georgia wants an Article V convention: a meeting of states authorized in the U.S. Constitution to make amendments to that document. It could consider any one of the three topics in the resolution. They are worded broadly and aim to make the federal government live within its means, cut federal power and impose some kind of congressional term limits.

It takes similar resolutions in 34 states to trigger an Article V convention, something that has never happened before.

Senator Don Balfour called last night to tell me that he is running for re-election to the State Senate.

It will sure help his reelection fund if the State decides to honor his request for reimbursement of more than $156,000 he spent defending himself against and 18-count indictment.

Congratulations to Steve Tarvin, who will take office as the next State Representative for House District 2, having won his runoff election against Neal Florence. Sam Moore will be sworn-in to the House District 22 seat. 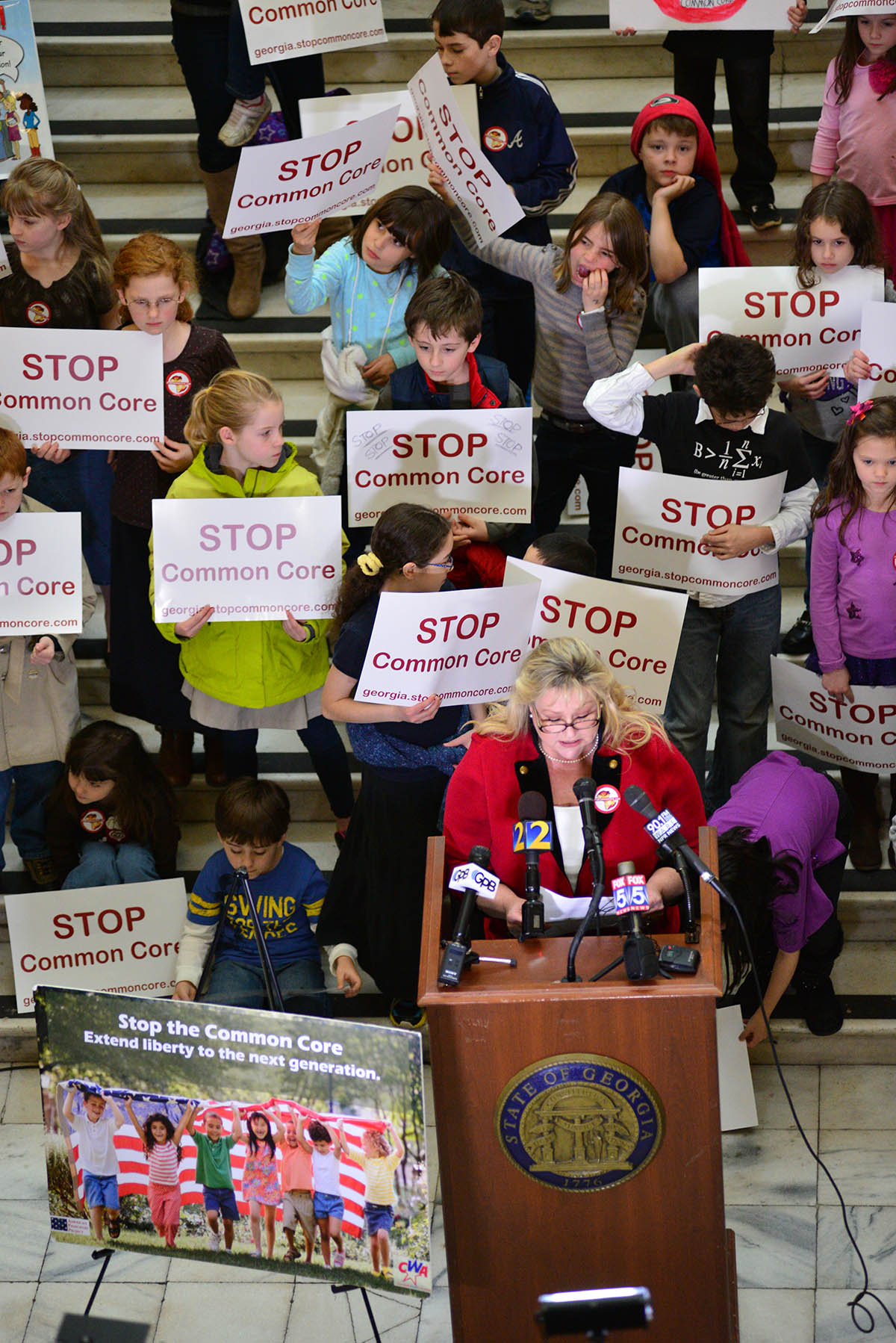