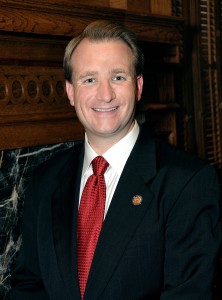 Sen. Albers Continues to Push for Ava’s Law during Autism Day at the State Capitol

As part of Autism Day at the Georgia State Capitol today, Sen. John Albers ( R- Roswell) joined Autism Speaks, The Early Autism Project, Rep. Ben Harbin and other state legislators to continue their push for the passage of Ava’s law in Georgia.

“Increasing funding and support for Autism is the right thing to do for Georgia’s children and families suffering with Autism,” said Sen. Albers. “As this population only continues to grow, it is important we act now to provide funding for the early intervention and long-term care of children living with this disorder.”

In honor of Ava Bullard, the inspiration behind Ava’s law, Sen. Albers held a press conference recognizing Ava and her family with Senate Resolution 835. He also addressed the importance of early detection and providing insurance coverage for Autism treatment.

According to the Autism Society of America, more than 1 million people live with an Autism spectrum disorder, which costs the United States $90 million in treatment a year. The lifetime cost of raising a child with autism can reach upwards of $5 million.