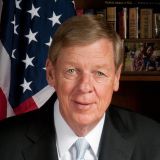 This week, Georgia experienced a difficult several days due to the snow and ice storm that occurred on Tuesday, Jan. 28, 2014. My thoughts and prayers were, and are, with all those affected by this unfortunate event.

Also on Tuesday, President Obama delivered the annual State of the Union address, and I was disappointed with what he had to say. America is not on the right track. Since the president took office, median household income is down nearly $4,000, job opportunities are less during this protracted time of unemployment, and the American people are concerned for their future and the future of their children.

The president called for 2014 to be a ‘year of action.’ I urge the president to take action on several items, including the Workforce Investment Act, which I have been working on for more than a year with House and Senate Republicans and Democrats. The Workforce Investment Act hasn’t been reauthorized in six years. We ought to pass this legislation to expand job training and opportunity.

Additionally, we need Trade Promotion Authority granted to the president so he can initiate further and aggressive trade agreements around the world.

Furthermore, we need to address Obamacare, which is inflicting a great deal of pain on the American people, especially in terms of higher premiums, cancelled coverage and fewer choices. Obamacare is also causing Americans to lose their jobs or forcing them into part-time employment.
‎
Lastly, the crowning blow is the president’s failure to sign the Keystone XL Pipeline agreement, which sits on his desk and would immediately bring jobs to America and promote energy independence in our country.

Specifically, S.1926, delays the implementation of certain provisions contained in the Biggert-Waters law that was enacted in 2012.

I have worked with Republicans and Democrats for several months on the flood insurance legislation, and I am delighted that the Senate came together in a bipartisan manner this week to protect millions of Americans from the steep increases in their annual flood insurance premiums. Throughout the process, I have repeatedly voiced the concern that without action, some homeowners would not be able to afford large increases in their flood insurance premiums and in turn, could lose their homes. Also, without action, many Americans and Georgians could see their home values plummet, crippling local housing markets and causing local economies to decline. I look forward to working with my friends in the House to ensure that flood insurance is both affordable and sustainable for the American people.

What’s on Tap?
Next week, the Senate will resume consideration of the conference report to the five-year farm bill, H.R.2642.

On Monday, I look forward to speaking to the Atlanta Rotary Club with U.S. Sen. Jeanne Shaheen, R-N.H., on the topic of our Biennial Budgeting and Appropriations Act, S.554. Our bipartisan legislation would help end reckless spending and reform the federal budget process by converting it from an annual spending process to a two-year cycle, with one year for appropriating federal dollars and the other year devoted to much-needed oversight of federal programs.