Rep. Jack Kingston: Responds To 2014 State of the Union

Rep. Jack Kingston: Responds To 2014 State of the Union 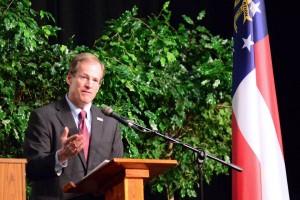 Congressman Jack Kingston (R-GA) reacts to the President’s sixth State of the Union address this evening.

“While the President attempts to shift from the core issues that cripple our economy and threaten our security, we must bring attention to the solutions for these problems passed by the House but awaiting action in the Senate,” said Kingston. “With millions of Americans working only part time or out of the work force entirely, we cannot afford to wait.  There are a number of projects we can begin now that will create jobs and strengthen our economy, namely the Savannah Harbor Expansion Project and the construction of the Keystone XL pipeline.”

2013 marked a number of blunders for the Obama administration.  From the failed rollout of the President’s signature health care law to the feeble job market, last year fell short of any projected success or progress on the part of the White House.

“We need the kind of growth that comes from stopping overregulation and supporting opportunities in the private sector.  Instead of increasing the cost of health care, we need to encourage companies to hire full time employees instead of more part-time workers,” Kingston states.

The White House confirmed that the President intends to use executive powers to bypass Congress on important legislation regarding immigration reform and gun control.  To act on critical issues such as these without congressional approval would be a tremendous mistake.

“I have been on the forefront of fighting presidential overreach with my bill to force Congress, the President, Vice President, and executive branch to participate in Obamacare without taxpayer funded subsidies,” said Kingston.  “The entire government must live under its own laws.”