A Lake, a School, and a Courthouse.

A Lake, a School, and a Courthouse. 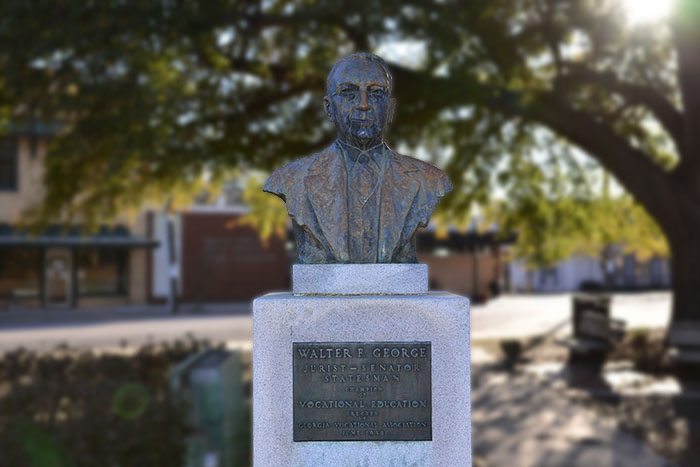 If you were to visit the town of Preston today, you would be treated to a quaint and decidedly southern “community” in South West Georgia. But in 1878, on January 29, Preston was the birthplace of one of Georgia’s most distinguished Senators: Walter F. George.

While Senator George is best remembered for his career in the United States Senate, his political resume is unparalleled. The son of sharecroppers, George made his way from Webster County to Macon, Georgia, and graduated from Mercer Law School in 1901. He became a member of the Georgia bar shortly thereafter and opened a practice in Vienna, which is the county seat of Dooly County. In 1912, George became a Superior Court Judge in the Cordele judicial circuit.

George served as a Judge for the Georgia Court of Appeals from January 1917 until October of 1917. He resigned and became an Associate Justice of the Georgia Supreme Court for the duration of 1917 and served in that capacity until 1922. But for the death of Thomas Watson—the prototype for Eugene Talmadge—George may have remained a Justice of Georgia’s Supreme Court. Watson was only in his second year of office when he died, necessitating a special election to fulfill his unexpired term. As an aside, prior to the special election Governor Hardwick appointed an eighty-seven year old woman, Rebecca Latimer Felton, to hold the seat until a successor elected.

Hardwick had ulterior motives in appointing Felton. The Governor wanted to be Senator and believed that by appointing a woman he would gain favor with newly enfranchised women voters, which would propel him to victory in the special election. Hardwick was wrong. And on November 7, 1922, Walter F. George defeated Hardwick in the special election. While Hardwick had anticipated Felton’s appointment to be a nullity as Congress was not in session and thus Felton would never actually served.

But being a gentlemen from the South, George allowed Felton to be sworn in prior to taking his oath of office. Felton served as Georgia’s Senator for a day, becoming the first female Senator in the history of our country. Senator George became official on November 22, 1922. And for the next thirty-five years he served in that capacity.

Like his career prior to the the Senate, George’s tenure as one of Georgia’s Senators was remarkable. George served as the Chairman of both the Foreign Relations Committee and the Senate Finance Committee. The Georgia congressional delegation propounded George as their presidential nominee in 1928. In his last two year of office, George served as the President Pro Tempore of the Senate.

Although George was a Democrat, he found himself in opposition to President Roosevelt and his “New Deal” policies. While FDR and George were not on the same page regarding domestic policies, they were at least reading from the same book regarding foreign policy. George staunchly supported America’s efforts in World War II. Later, during the Eisenhower Administration, Senator George continued to support America’s foreign policy goals.

On domestic issues, George was your typical southern democrat during that time. He supported prohibition and segregation. Other southern politicians often congregated in George’s office to strategize. Despite this, George’s stance was more tempered than his counter-part Richard B. Russell. When Herman Talmadge began running for George’s seat in 1956, George decided that Talmadge’s hardline views on the issue of segregation combined with the Talmadge political machine would make for a difficult reelection bid. Seriously believing he could lose to the young Talmadge, Senator George chose to not run for reelection.

After retiring from the Senate, George had one last position to add to his resume In 1957 he was appointed as ambassador to the North Atlantic Treaty Organization and served as special foreign policy advisor to President Eisenhower. His tenure in this position would be cut short by his death in August, 1957.

Many things have changed since 1878. Preston is no longer a town, becoming an unincorporated area in 2009. And now the Webster County Courthouse, the Mercer Law School,  and a Lake in South West Georgia all have one thing in common: they are named after Walter Franklin George. Very few individuals in Georgia history can claim to have had a career as distinguished as his.