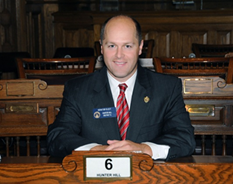 Welcome to my 2014 Gold Dome Updates.  Over the course of the next Month and a half, I will be sending bi-weekly updates about the issues we are facing in the legislature.  Today marks the end of the second week of the 2014 Legislative Session. With an anticipated end of the session in mid-March, we are working our way through the second term of the 152nd legislative session. On the opening day of session, Lt. Gov. Casey Cagle kicked-off the 2014 session with a ceremonial call to order, the Pledge of Allegiance and the traditional devotion given by the Chaplain of the Day.

We also welcomed newly-elected Sen. Bruce Thompson of the 14th Senate District and swore-in the new Secretary of the Senate, David A. Cook as. This week, I had the pleasure of introducing two physicians from my district to serve as Doctor of the Day, Dr. Thaddeus Linn, M.D. and Dr. Marvin Rachelefsky, M.D.

Governor Nathan Deal also delivered his annual “State of the State” address on Wednesday, January 15. He highlighted Georgia’s status as the number one state in which to do business, a recognition given by one of the nation’s premier real estate and economic development publications, Site Selection Magazine. This distinction is fitting considering Georgia’s significantly improved employment rate and the recent addition of approximately of 217,000 jobs over the past three years. As a result of state’s commitment to fiscal responsibility, Georgia is able to maintain a AAA bond rating from all three rating agencies – a distinction that further solidifies Georgia’s position as a leader in job creation and economic development.

During the “State of the State,” Governor Deal also unveiled his proposed budget plans for the upcoming fiscal year, focusing on key state priorities such as education, juvenile justice reform, and economic development. The state budget has increased from $19.9 billion in FY 2014 to $20.8 billion in FY 2015. Throughout the remainder of the week, members of the House and Senate Appropriations Committees spent a considerable amount of time combing through every line item of the state budget.

Senate Bill 240, which I sponsored, passed unanimously out of the Regulated Industries committee on January 23. If signed into law, this legislation will allow non-profit museums to obtain a $100 annual license, allowing the consumption and manufacturing of distilled spirits on-site. The Atlanta History Center initially approached me with the idea to enhance the overall learning experience of “The Smith Family Farm”, which features an authentic 19th century farm. As a result of this bill, individuals that visit the Atlanta History Center will be offered a more authentic, in-depth look at the distilling process.

Below is a list of legislation passed by the Senate during the first two weeks of the 2014 legislative session.

Last week Gov. Deal signed House Bill 310 which shifts election qualifying dates in Georgia to require at least 45 days of absentee balloting before the date of a runoff or primary election where a federal candidate is on the ballot; this means qualifying for public office will begin on March 3, 2014 and run through March 7, 2014. Further, HB 310 will align the schedule of state and local candidate elections to correspond with federal candidate election dates. So now, our federal and state primaries – including the gubernatorial and all General Assembly races – will now occur on May 20th instead of June.

On January 15, the Senate adopted SR 739 which commends the Nation of Israel for its cordial and mutually beneficial relationship with the United States and the State of Georgia. In 2010, the State of Georgia became one of only 13 states to open an office of economic development in downtown Tel Aviv. As a result, Georgia has opened at least four companies in Israel, further strengthening our relationship and stimulating both of our economies.

On January 16, we adopted SR 749 commending the General Daniel Stewart Chapter of the National Society Daughters of the American Revolution (DAR) on the one hundredth anniversary of its founding. DAR is a women’s service organization dedicated to promoting patriotism, preserving American history and securing a better education for children.