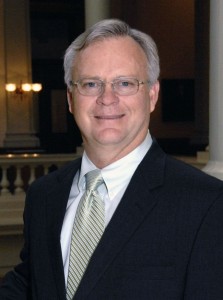 WILLIAMS: Update from the Gold Dome

The 2014 Legislative Session commenced on Monday with the customary call to order by Lt. Gov. Casey Cagle, the Pledge of Allegiance, the traditional Devotion given by the Chaplain of the Day, the welcoming of newly-elected Sen. Bruce Thompson and the swearing in of the new Secretary of the Senate, David A. Cook. It was a successful beginning to a promising session, and we are hitting the ground running.

This year’s session will be abbreviated and is scheduled to end in mid-March. This will accelerate the legislative process, encouraging a more efficient turnout of bills while also saving taxpayer money.Governor Nathan Deal delivered the annual State of the State Address on Wednesday. During his address, he revealed his initiatives for juvenile justice reform, education funding and economic development efforts such as the Port of Savannah Expansion Project. Gov. Deal has also proposed a budget of $20.8 billion for FY 2015 with a large portion going towards K-12 and Higher Education.

Gov. Deal was proud to announce that Georgia has been named “the number one state in the nation in which to do business,” which was a goal our state set out to accomplish last year. With this distinguished ranking, we hope to experience an increase in our state’s economic development efforts and employment rate.

By allocating an additional $547 million to state education spending we are ensuring that our students are receiving the best education possible while also protecting our teachers.  The budget also calls for $25.6 million for Forestland Protection grants which provide local governments with funds necessary to maintain key local services and quality schools while also preserving the state’s crucial natural resources.

In addition, Gov. Deal has included $35 million in bonds for the Savannah Harbor Expansion Project.  By dedicating funds to the crucial areas of education and infrastructure we are continuing to attract businesses and provide all citizens with the best conditions and opportunities possible. The week concluded with budget hearings to ensure funds are responsibly allocated throughout the state and state agencies.  We will take this coming Monday off to honor and remember Dr. Martin Luther King, Jr. and resume the state’s business on Tuesday.  I look forward to updating you in the weeks to come as we march toward Sine Die, the official end of the 2014 Legislative Session.

As we move forward, I remain committed to supporting policies that promote business growth and get Georgians back to work. As always, it is a pleasure to serve the 19th Senate District. If you have any questions or concerns, please do not hesitate to contact my office at 404.656.0089 or via email at Tommie.williams@senate.ga.gov.