Sen. Jeff Mullis: Named One of Georgia’s 100 Most Influential People

Sen. Jeff Mullis: Named One of Georgia’s 100 Most Influential People

Sen. Jeff Mullis Named as one of Georgia’s 100 Most Influential People 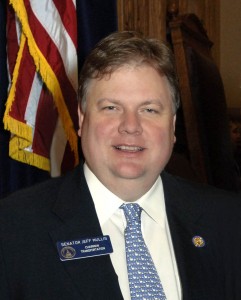 Georgia Trend Magazine recently named Sen. Jeff Mullis (R-Chickamauga) to its Power List of “100 Most Influential Georgians.” This is the sixth consecutive year in which the magazine has honored Sen. Mullis. Individuals on the list have accomplished something significant for the state and have had a positive impact on the livelihood of all Georgians in one way or another.

“It is a great honor to be named to such a prestigious list. I am humbled to be included among the many community and state leaders who are working diligently to make Georgia the greatest state in our nation,” says Sen. Mullis. “I look forward to leveraging my position to further advance the issues facing my constituents, since they are always my primary focus.”

Sen. Mullis was first elected to the State Senate in 2000 and currently serves as chairman of the Senate Rules Committee. He is the past chair of the Senate Transportation and Economic Development committees. Sen. Mullis lives in Chickamauga with his wife Teresa and has three children.