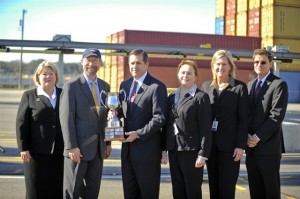 The Georgia Ports Authority has won recognition by the Environmental Protection Agency as a leader in reducing carbon emissions.

“The GPA has voluntarily undertaken many projects to decrease diesel fuel consumption, resulting in improved air quality,” said GPA Executive Director Curtis Foltz. “Some of those projects include our innovative eRTGs or electric rubber tired gantry cranes, the repower of diesel RTGs with variable alternators, and the retrofit of 11 switch locomotives by GPA’s partner, Rail Link.”

In December 2012, the Georgia Ports Authority unveiled its first four electrified rubber-tired gantry cranes. The GPA board recently approved spending $8 million for Phase II of the eRTG project, which will convert 10 additional diesel RTGs to electric power, and install conductor rails at 12 more container blocks. GPA’s transition to an eRTG fleet should be complete by 2024.

The SEDC award is presented annually for projects that best exemplify extraordinary leadership in promoting the goal of the collaborative – which is to improve air quality and public health by reducing emissions from existing diesel engines.

In addition to the SEDC announcement, the EPA awarded Georgia Ports with a $600,000 Diesel Emissions Reduction Act grant to be used for a dray truck financing program.

“We are pleased to see peer recognition of superior corporate stewardship by organizations that are improving air quality in the region,” said Stan Meiburg, Acting Regional Administrator for EPA’s Southeast region. “Your strategies have involved operations throughout the port, and show both a strong commitment by the Georgia Ports Authority to the environment and your desire as a leading U.S. port to use best practices that increase efficiency and save time and money.”

Meiburg also noted the collaborative approach taken by the GPA, as well as its use of innovative technology and approaches to reducing diesel emissions, calling Georgia Ports a model for others to follow.

While previous initiatives include improvements to decrease idling and road congestion, cleaner power systems and storm water treatment, the GPA won the Community Leadership Award on the basis of the following technologies:

·        Electric Rubber-Tired Gantry Cranes, developed with input from GPA engineers, use a retractable arm that latches to a conductor rail while the crane is in use over a container stack. When moving between rows, a diesel generator automatically starts at the end of one conductor rail, then stops when the computer-guided arm re-engages with the conductor rail at the next row. GPA partners on the project included Konecranes, Conductix-Wampfler, and the Electric Power Research Institute.

“In order to broaden the impact of its environmental successes, the GPA has shared information on such projects with other ports, and will continue to do so as the industry pursues good environmental stewardship,” said GPA Board Chairman Robert Jepson. “Each year, the GPA conserves more than 7.2 million gallons of diesel through efficient equipment upgrades and energy savings programs.”