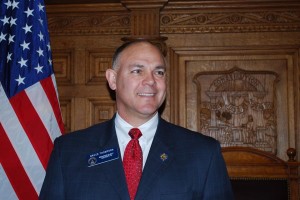 Sen. Bruce Thompson (R-White) was recently appointed to serve on several influential committees for the 2014 Legislative Session by the Senate Committee on Assignments.

“I am deeply honored to be appointed by my colleagues to serve on these influential committees,” said Sen. Thompson. “We will be facing many important issues this session, and I look forward to advancing the best interests of Georgians throughout the state.”

Sen. Thompson was appointed to serve as Vice Chairman of the Science and Technology Committee and Secretary of the State Institutions and Property Committee. He is also a member of Economic Development and Veterans, Military and Homeland Security Committees.

“I’m humbled to preside over a Senate that is strongly unified and filled with individuals that are hard-working, intelligent and dedicated to solving problems,” Lieutenant Governor Cagle said. “I look forward to working hand-in-hand with Sen. Thompson, who is extremely well-versed and passionate about these important subject matters, to deliver Georgians real results on the major issues facing this State.”

“We are fortunate to have a wealth of talent and experience in the State Senate,” said President Pro Tem David Shafer (R-Duluth). “I have every confidence in our new committee leadership team.”

Once a piece of legislation is introduced in the Senate, it is assigned to a Committee, depending on its topic.  If the Committee gives the legislation a “do pass” recommendation, then the proposed law is sent to the Rules Committee for consideration.  The appointed chairs will oversee the operation and order of Senate committee meetings, including calling for action on bills, resolutions or other matters assigned to that committee.

The second term of the 152nd Legislative Session of the Georgia General Assembly convened January 13, 2014 at the Georgia State Capitol.